In Depth: Amazon Prime Instant Video vs Netflix: which is best for you?

Tired of replacing your media collection every four years? Owning stuff is so 20th Century: these days, the smart money gets spent on streaming.

Why pay for shiny and expensive discs when you can stream almost everything ever made to every device you and your family own for a small monthly fee?

That’s what Netflix and Amazon Prime Instant Video offer, but there are big differences in the way they do things and in the stuff you can see.

While you could easily pick a service simply based on the exclusive TV shows you want to watch – House of Cards is only available on Netflix, for example, but Amazon has Emmy-award winning Transparent – there are a few other categories that are worth taking into account.

If you’re a member of Amazon’s Prime free-delivery club, the Instant Video service is free – although the annual price of Prime has been hiked from £39 to £79 ($99 in the US) and gives you video whether you want it or not.

If you want Amazon Prime Instant Video but don’t want the other benefits of a Prime membership, the price is a flat £5.99 per month. 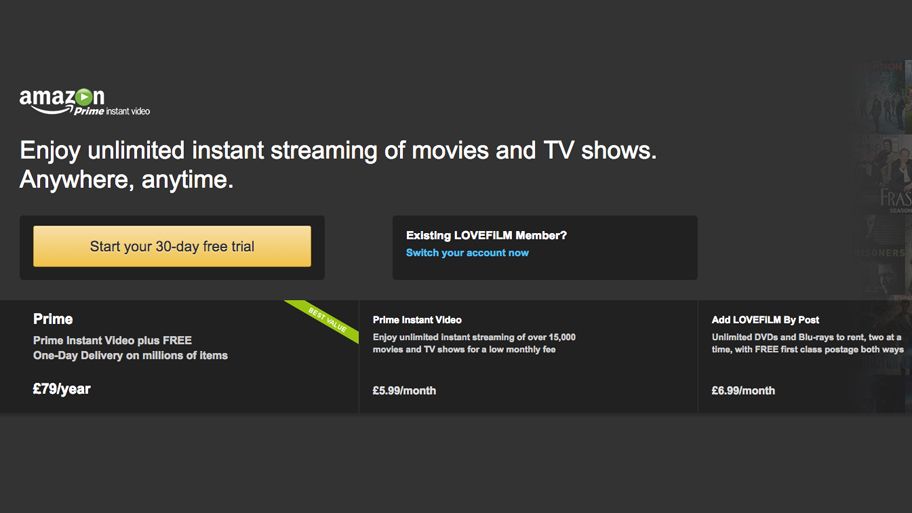 So who’s the winner? The cost comes out roughly to the same thing if you’re only using an HD TV or monitor. If you have a 4K screen, Amazon Prime Instant Video is slightly more cost-effective, as it doesn’t upcharge you for accessing higher-resolution content, and free two-day shipping isn’t a bad perk either.

Both services are available for PC and Mac, Xbox 360 and Xbox One, PS3 and PS4, Nintendo Wii and Nintendo Wii U, iPhone, iPod Touch and iPad and the Kindle Fire family. 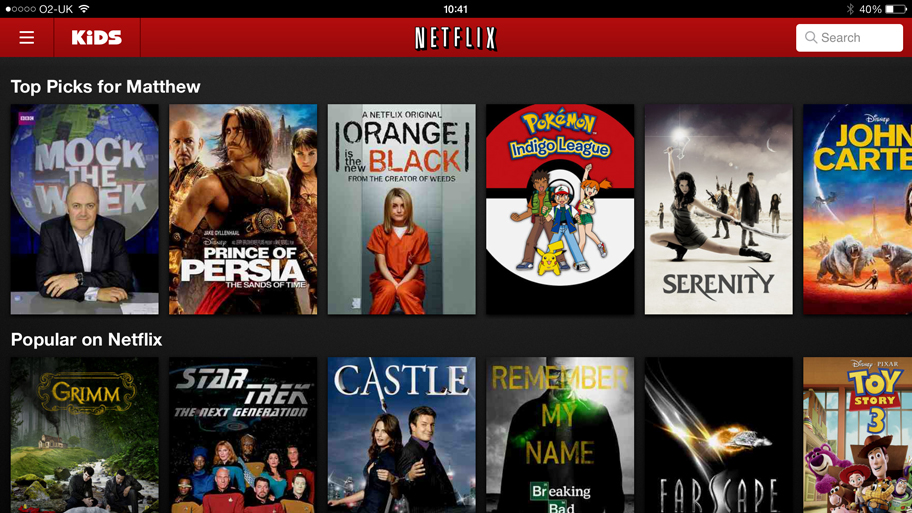 The previous lack of an Android phone app has been addressed, however there’s still no Windows Phone app. As you’d expect, it works with Amazon’s own Fire TV.

You’ll find a full list of Netflix-capable devices here, and the list for Amazon Instant Video is here. 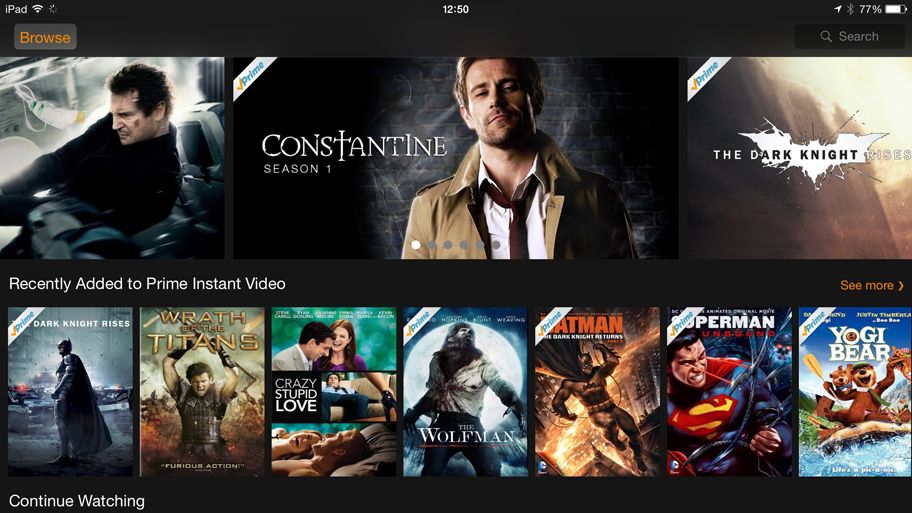 Both services are offered on most devices, meaning you shouldn’t have a problem binge-watching wherever you go. Netflix is usually a bit faster coming to new devices, however, and because it doesn’t have a media streaming device of its own, it’s available on both the Apple TV and Amazon Fire TV platforms.

Both services have extensive libraries of kids’ TV shows and movies including Disney and Pixar hits. Amazon also has an impressive collection of cartoons, including both the award-winning Avatar: The Last Airbender and its sequel, The Legend of Korra.

Both services have parental controls that can prevent the little ‘uns from streaming horror movies, and Netflix also enables you to create separate profiles for each user and make the kids’ ones child-friendly. Amazon recently rolled out its version of child protection called Free Time that allows you to set stringent time restrictions that can either limit your kids to so many hours of streaming per day or only allow them to watch content during specific time periods like, say, 6pm to 8pm. 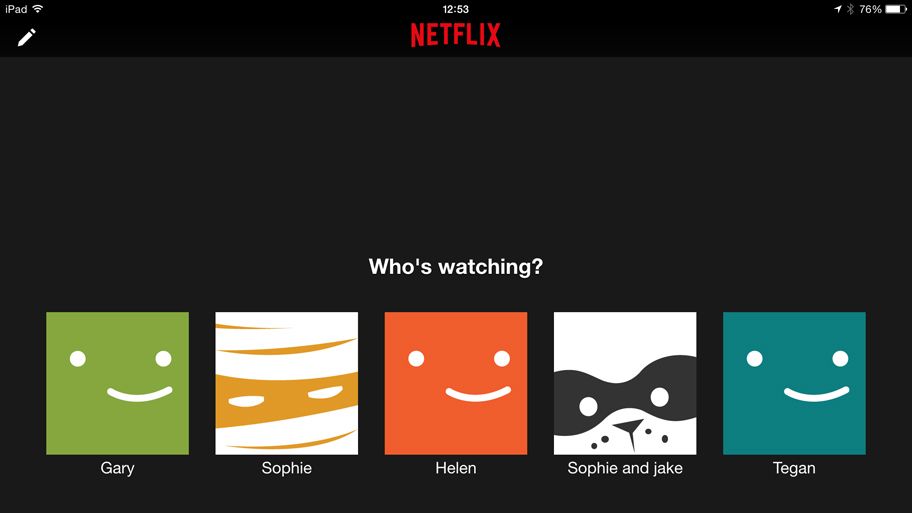 Personally, the kids area of the Netflix store feels slightly livelier than Amazon’s kids section, but both are frequently updated with shows from Nickelodeon and Disney, as well as new, original content like the Kung Fu Panda spin-off or How To Train Your Dragon TV show.

Netflix has long had the edge over Amazon when it comes to TV: it snapped up the rights to stream Breaking Bad and it’s commissioned critically acclaimed shows such as Orange Is The New Black and House of Cards.

Amazon is getting into the commissioning game too – its drama Transparent has attracted rave reviews, Bosch is pretty good and Mad Dogs, a recasting of the 2011 UK TV show, really adds depth to the selection – but its TV catalog isn’t quite as impressive as Netflix’s.

Netflix is a little faster on the draw when picking up new series than Amazon is. So, for example, Netflix has 8 seasons of the US Office while Amazon’s streaming ends with season 5. 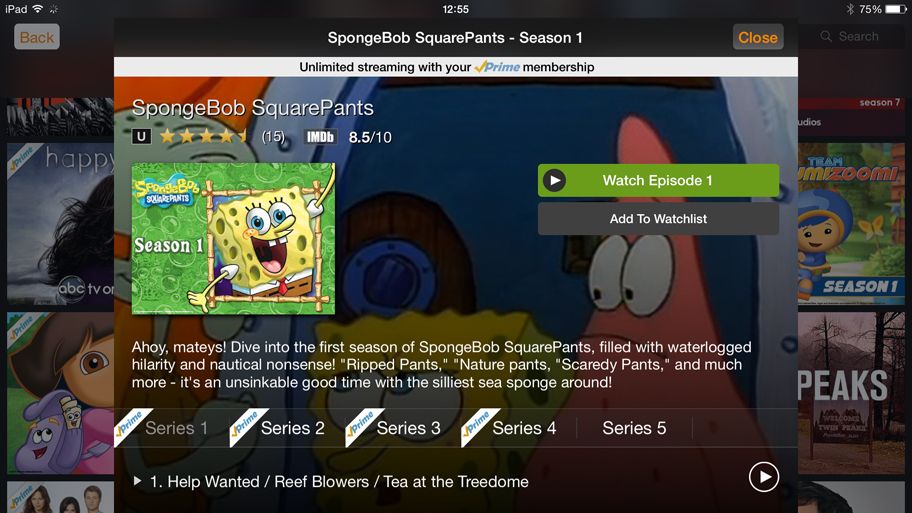 That brings us to one of the things we really hate about Amazon’s offering: Prime Instant Video sits alongside the non-Prime Instant Video service, which is video on demand and isn’t included in your membership. It’s very frustrating to see programs in the listings without the blue Prime logo.

It’s pretty easy to confuse the two and most times you’ll only recognize the difference when you confusingly see a screen asking for money. On Netflix everything is available at any point – there’s no premium section or hidden fees tucked into it.

On balance, we think Netflix has the better selection of TV programs – but that might be because we’re more Breaking Bad than Vikings. We’d recommend searching both services for your favorites.

It’s important to know that both services regularly prune their catalogs, usually because the deals with the content owners have expired. Don’t assume that a title that’s there today will still be there in a few months’ time.

If you want the very latest blockbusters, neither service is for you: both Netflix and Amazon operate in the post-DVD window, which means they don’t get the big movies until they’ve been sold in every possible market from in-flight movies to DVDs. 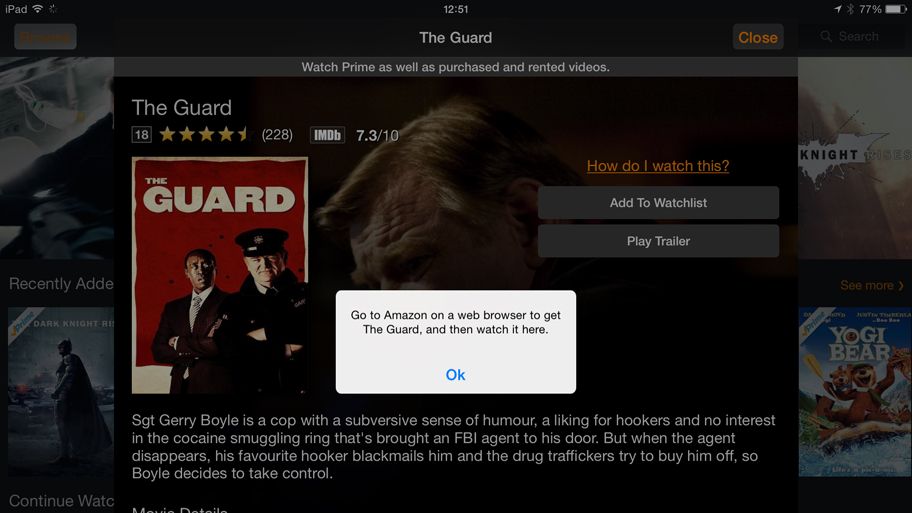 While things are improving in that respect you’ll usually have to wait much longer for movies to appear on streaming services than on video on demand, and Amazon demonstrates that perfectly: many of the films we’d like to see are available on Amazon’s pay-per-download Instant Video for around £4.49 ($6.99) for an HD rental, but they aren’t available on Prime Instant Video. If you’d like to make sense of what’s available where, Findable.TV is a big help.

Kids’ movies aside (where Netflix and Amazon are largely neck and neck) Amazon is generally better for mainstream movies than its rival. Netflix is very good for stand-up comedy, indie movies and documentaries.

Both services promise up to 1080p HD streaming in their standard services, and they use adaptive streaming to adjust the bitrate according to network conditions and congestion.

However, the quality you get depends on what particular device you’re using. We mentioned the list of supported Netflix devices earlier, and it details the quality of the streaming – so for example Xbox 360 owners get 720p HD while Xbox One, PS3 and PS4 users get 1080p. 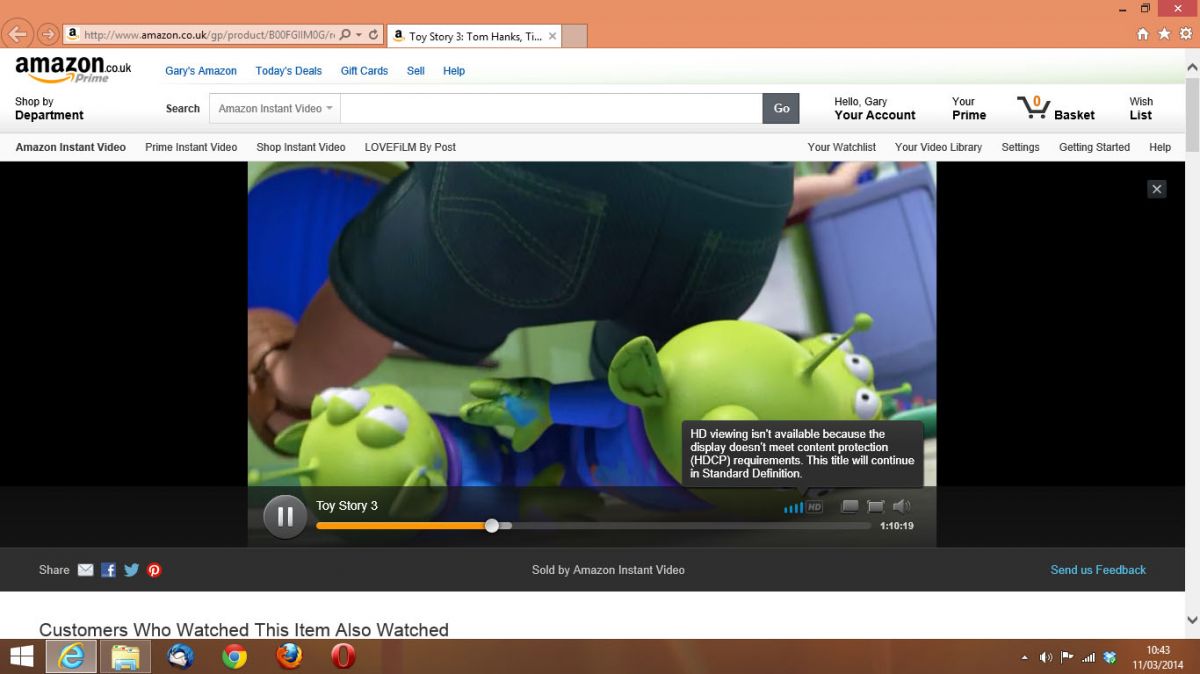 Amazon’s streaming has improved considerably, probably due to the launch of the Fire TV: its service offers up to 1080p unless your device isn’t HD compatible. However, there’s a big difference between devices being capable of full HD and devices actually getting it. 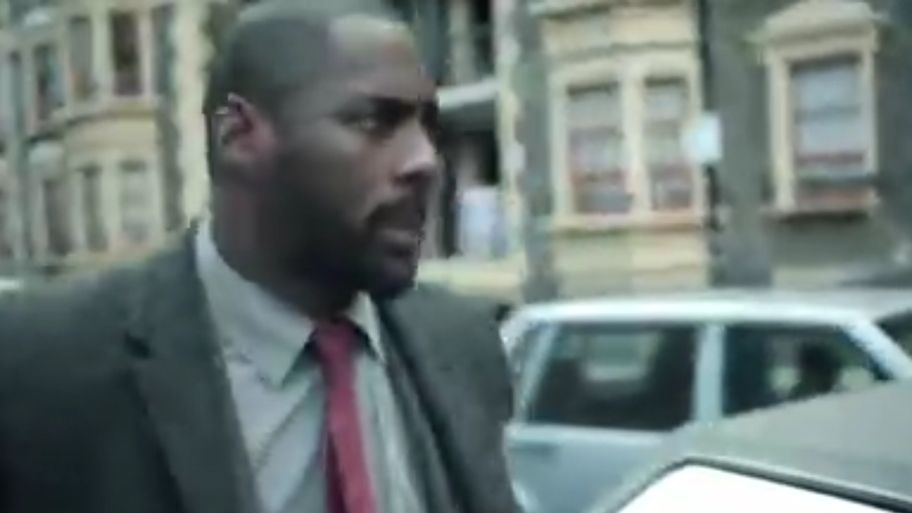 We’ve previously found streaming on iOS to be seriously sub-par and that’s still the case, with some content almost unwatchable, and if Amazon was really streaming episodes of Luther to our PS4 at 1080p it was doing a bloody awful job of it.

We’d definitely recommend taking advantage of the free trial to see if Amazon’s up to snuff on your device before signing up to Prime.

As a streaming service, Netflix is the clear winner here. The interface is great, device support is exceptional, streaming is good quality and rock-solid and it’s a joy to use whether you’re on a computer, a set-top box, an iPad or a games console. If it were a shop, it’d be John Lewis.

Amazon is… Amazon. It isn’t as desirable as its rival, it doesn’t do things as elegantly and while there’s plenty of good stuff you have to go looking for it. The lack of clear differentiation between Prime and non-Prime content is infuriating, and the automatic bundling of the video service into every Prime membership alongside a 60% price hike was hardly customer-friendly. If you already subscribe to Netflix but you’re a member of Amazon Prime, you’re paying for Amazon Prime Instant Video whether you want it or not.

Ultimately, though, it comes down to whether the service has the things you want to watch on the devices you want to use. We’re still not sold on Amazon on the iPad, but on other devices Amazon Prime Instant Video generally works well enough and it’s generally better at getting (relatively) recent movies than Netflix is.

Netflix is much better for TV, though, and we think it also has the edge when it comes to documentaries and stand-up comedy. That’s where our tastes lie, so for us the Netflix catalog is the stronger one. That, combined with the better service, means Netflix remains the streaming service to beat.

Don't miss a deal at Ancestry
Best offers at Argos
Discounts, Sales and Deals at TalkTalk Phone and Broadband
Save your money with Bodybuilding
Online-Shopping with House of Fraser
Best products at Turbo Tax
Latest Posts