HTC’s blockchain phone can now be bought with real money

HTC is taking its blockchain phone a little more mainstream. Today, the company has announced that the Exodus 1 can be purchased for 750 US dollars. That’s right, traditional money. The kind that can be used in any store across the United States. Until now, the beleaguered phone manufacturer has only accepted Bitcoin (BTC), Ether (ETH) and Litecoin (LTC) as tender. Presumably, that was a choice (and not just a lame marketing stunt) to ensure early adopters were open-minded crypto enthusiasts. In addition to USD, the company is adding the Ethereum-powered Binance Coin (BNB) as a way to acquire the niche handset.

From afar, the Exodus 1 looks like a normal mid-to-high-end smartphone with a transparent cover. It has a 6-inch, Quad HD+ display and is powered by a beefy Qualcomm Snapdragon 845 processor, 6GB of RAM and a 3,500 mAh battery. The phone also ships with 128GB of internal storage and four cameras — a dual system on the back (12MP and 16MP) and two selfie snappers (8MP and 8MP) with “natural bokeh,” according to HTC. 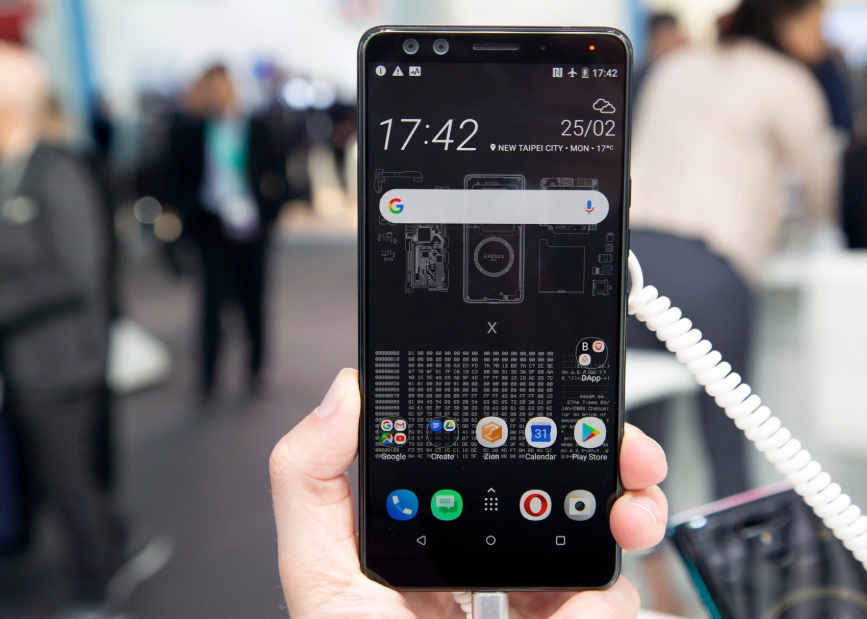 The headline feature, though, is a “secure enclave” that’s kept separate from the processor and Android operating system. It can be used to store crypto keys that are normally stored in a software wallet like Mycelium or USB-style devices built by companies such as Ledger and Trezor. Some even write them down on pieces of paper and lock them away in old-fashioned vaults and faraday cages. With the Exodus, HTC is trying to strike a balance between security and convenience. The enclave means you always have the codes with you, however they’re not connected to the operating system and are, therefore, harder for hackers to steal.

The enclave works with a HTC-developed wallet called Zion. The company says it can be used to store, send and request a number of cryptocurrencies including Bitcoin, Ether and Litecoin, as well as a number of Ethereum-based ERC-20 and ERC-721 tokens. Today, HTC has announced that Zion is now compatible with Opera’s internet browser. The developer has been testing a built-in crypto wallet since last July that allows users to pay for goods and services in a similar manner to Google and Apple Pay. Now, Exodus owners can sync their accounts and use the Secure Enclave as a protective layer for their online shopping and crypto-transactions.

0 0 0
Previous ArticleBest travel camera 2019: The best snappers for your holidays to suit every budget
Next ArticleHTC's blockchain phone can now be bought with real money
Comments (0)

Don't miss a deal at Nike DE
Best offers at Groupon
Discounts, Sales and Deals at Udemy
Save your money with Sephora
Online-Shopping with FNAC
Best products at Carphone Warehouse
Latest Posts