Full disclosure: I’m predisposed to liking anything that’s copper-colored. Show me a laptop that’s trimmed in said shiny-but-velvety hue, such as HP’s Spectre x360 15t touch, and it’ll take a pretty major flaw for me to dislike it. Show me a laptop with copper highlighting and a 15-inch, touch-enabled 4K UHD OLED display, and it’s going to have to insult my mother before I’ll have anything bad to say about it.

I’m also a huge fan of thoughtful design, and this laptop comes darn close to being flawless in that department. Then there’s the display…

This review is part of our ongoing roundup of the best laptops. Go there for information on competing products and how we tested them.

Why the AMOLED display is special

What’s the thing with black? When you start from that zero brightness, you don’t need as many nits to create high contrast (the difference between the lightest and darkest points). Also, real black gives you a sense of lushness that you don’t get with the dark grays of LCD.

All that’s just a fancy lead-in to telling you that the 500 or so nits’ peak brightness that this display can generate is plenty for normal conditions and even bright environments, such as the great outdoors.

The color is quite accurate as well, better than I’ve seen on consumer OLED TVs, because it’s a real three sub-pixel (red, green, and blue) RGB display rather than the WRGB (white, red, green, and blue sub-pixels) found in the former. HP claims this laptop’s display achieves 100 percent of DCI P3 color space, which simply means it can reproduce a lot of different colors—far more than most displays. The white point (the point in the color matrix where white should occur) is very close to perfect. 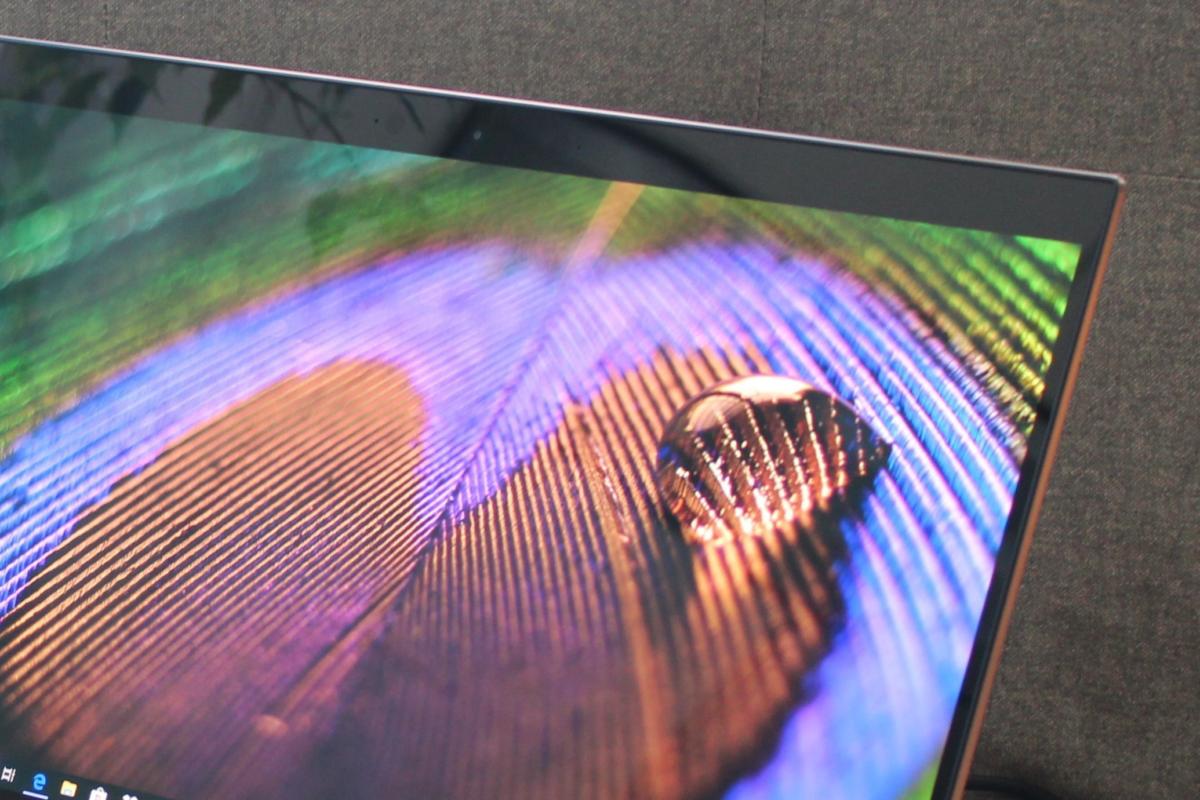 The fact that the display is 4K UHD (3840×2160) means there are no discernible pixels from a normal viewing distance (or much closer), and text is crisp as can be. Our review unit came with the display running zoomed to 225%, which means you’re halving the effective capacity for text, etc. But at the native resolution, only those with super-keen eyesight would be comfortable with how small everything appears.

Put succinctly, this is one fantastic display, with rich, saturated and accurate color. OLEDs have a somewhat limited lifespan compared to LCDs, with brightness dropping somewhat over time. But all things being equal, unless you leave it on 24/7 for a couple of years, that won’t be an issue. If you have the money, you won’t be sorry choosing this AMOLED display.

I’ve already related my favorite aspect of the Spectre x360 15t touch (15-df0043dx) I tested, but if the “Dark Ash Silver” chassis with “Copper Luxe” accents (HP’s color monikers) shown in the photo up top aren’t your thing, then there’s always the “Poseidon Blue” with “Pale Brass.”

If you don’t really care about color, the Spectre x360 15t Touch boasts many other design flourishes, starting with a CNC-cut-aluminum, mitered and faceted chassis. It’s angular. You might describe that as sharp, or if you like rounded corners you might find the whole thing bizarre and ugly. Taste is like that. 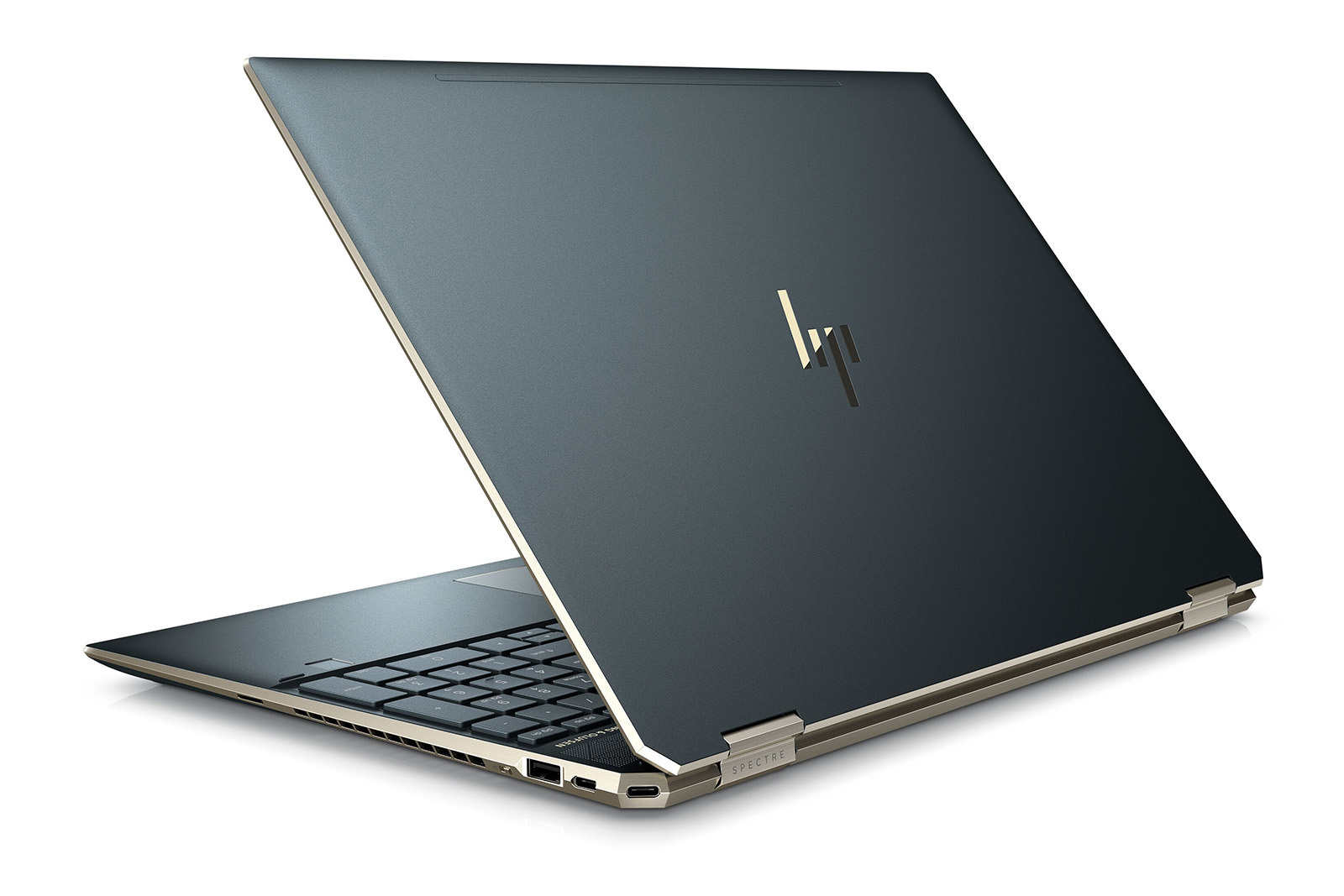 My favorite minor embellishment is the placement of the power button and USB port on the mitred back corners of the keyboard deck. They’re easy to get to without being obvious, and it’s very convenient to have the USB cable extending at an angle that tends to keep whatever’s attached to it out of harm’s way. Similarly, HP told me the power button was placed in the corner to avoid incidental contact. However, when removing the power cable, guess where I placed my forefinger for leverage? Yup.

As the name indicates, the Spectre x360 is a convertible, with a display that rotates a full, yes, 360 degrees. In that orientation, it’s essentially a large tablet—a very large and heavy tablet, measuring 14.22 x 9.84 x 0.76 inches, and weighing in at right around 4.8 pounds. That might seem like a daunting size for something hand-held, but if you nestle it up under your arm clipboard-style, it’s actually quite doable for short periods of time. You can also fold it into an upright tent position, or anything in between.

A note about the pricing: Our eval unit model (15-df0043dx) is officially available from Best Buy for $1,999.99. However we were able to configure what appears to be exactly the same model via HP.com (based on model 15-df0070nr), for a list price of $1,799.99. HP stated that prices on retailers including HP.com may vary and fluctuate from time to time (we’ve already seen Best Buy discount its price to as low as $1,699.99). 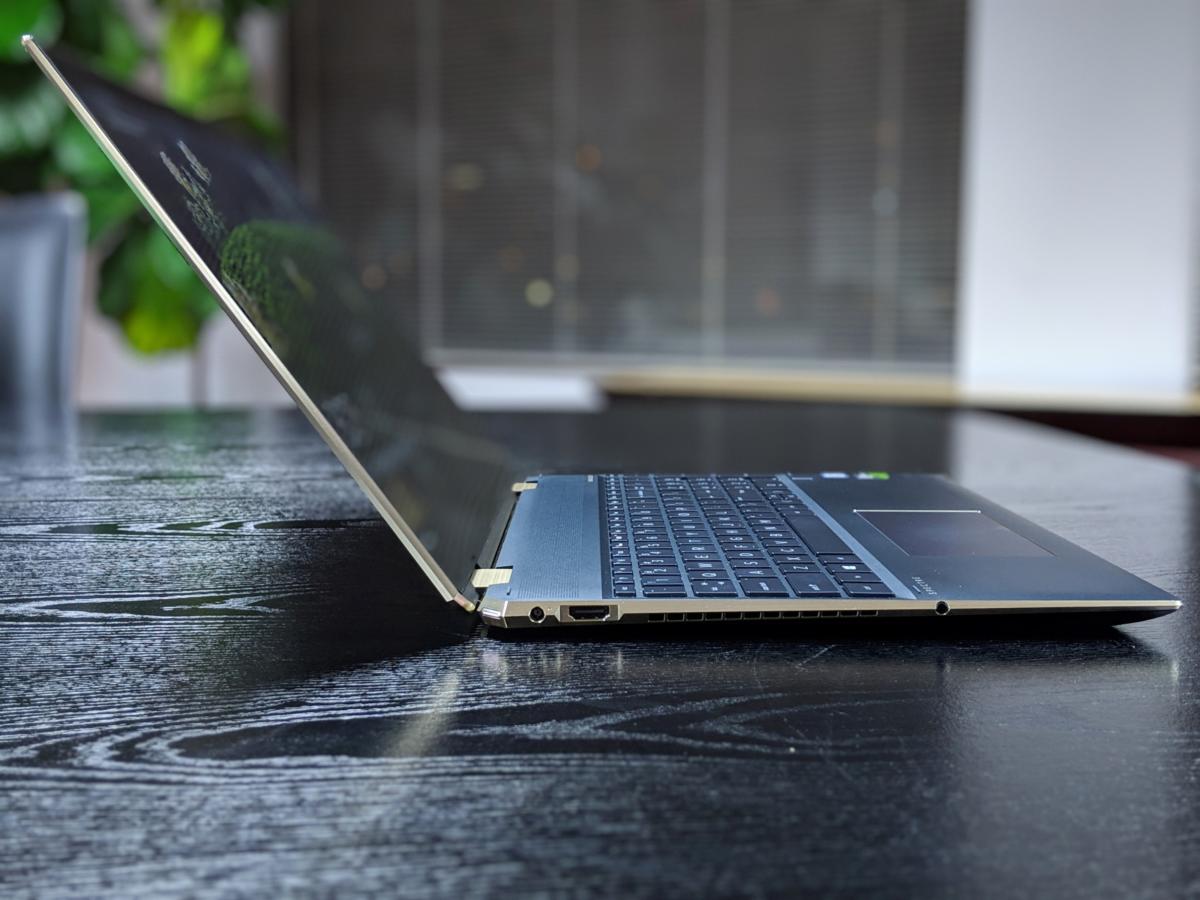 At the heart of our Spectre x360 15t touch is an Intel i7-8565U CPU fed by 16GB of DDR4-2400 DRAM. Our test unit arrived with the top-of-the-line 1TB combo Optane/NAND SSD storage option. On the other end of the spectrum is a 256GB SSD sans Optane, for which you’ll pay $290 less. In addition to the integrated Intel UHD 620 graphics for mainstream use, there’s a discrete Nvidia GeForce MX150 for light gaming, CAD and the like.

The port selection consists of a full-sized HDMI port, power adapter port, and audio headset jack on the left. In addition to a legacy USB-A port, you get two USB 3.1 Gen 2 (10Gbps) Type-C’s (including the nice angled one). The Type-C ports support Thunderbolt too, so you may enjoy superfast external storage and docking options, as well as external display and 10-gigabit ethernet options.

A unique feature we wouldn’t mind seeing on more laptops is the webcam kill switch. While a few other machines have sliding covers for the camera, the switch on the Spectre x360 15t touch actually removes the device from the circuit so it can’t be hacked back to life. I don’t care if people stare at me, but if privacy’s a concern this is a big plus, as is the fingerprint reader on the keyboard deck. 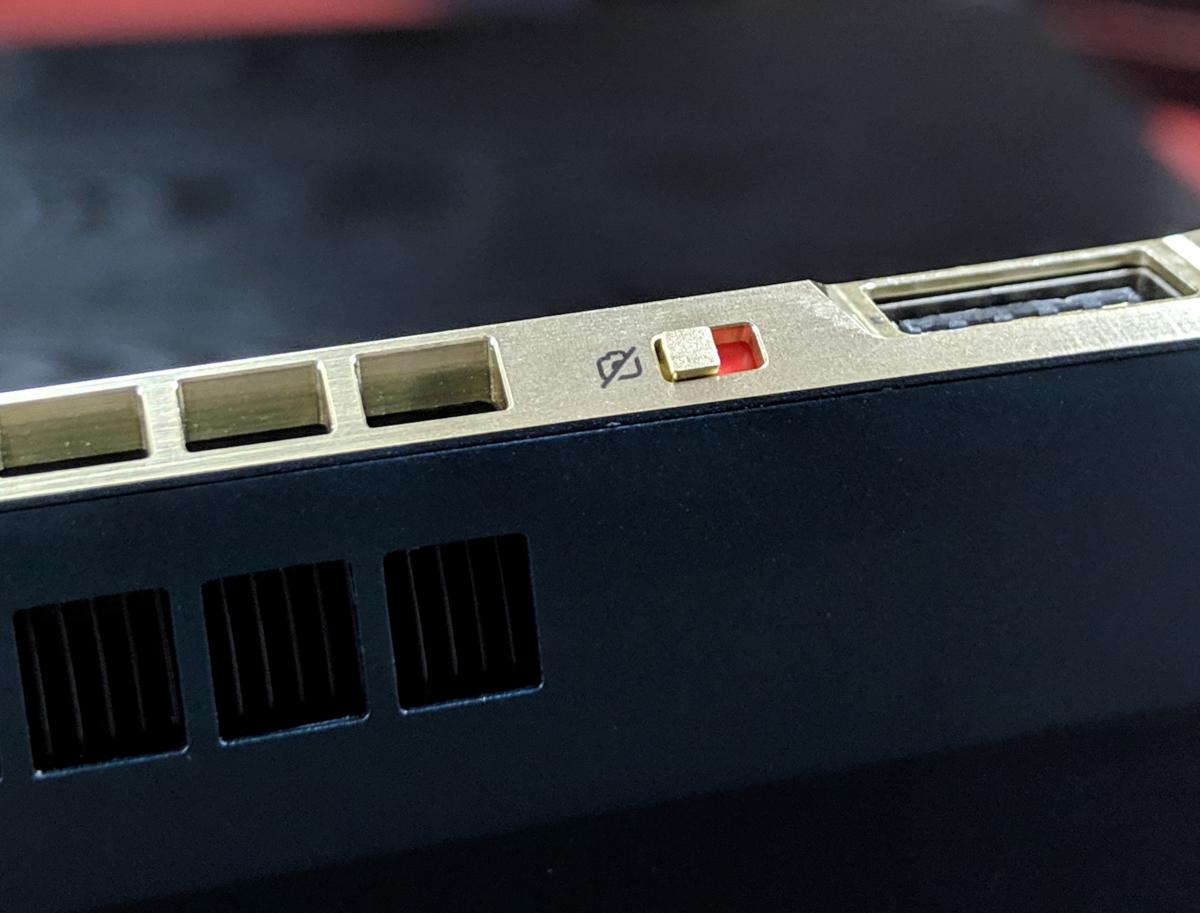 McAfee LiveSafe was really the only “value-added” software on board. There are a few HP-branded apps that largely duplicate the functionality of the Windows integrated apps and drivers, plus the usual advertising shortcuts in the start menu. A relatively garbage-less first boot experience.

The Spectre x360 15t touch’s Bang & Olufsen speakers are clear and crisp, though a tad lacking in bottom end. I was hoping for a bit more of the latter, because two of the laptop’s four speakers fire downward. Regardless, it’s far nicer sounding that the average laptop, and I never felt in dire need of a headset at any time. I don’t say that often about a laptop.

The overall Spectre x360 experience is top-notch, from the classy container to the rounded non-standard (non-ugly) 135-watt power supply. Even the boot logo is stylish. You pay a lot for the Spectre x360 15t touch, but you certainly won’t suffer buyer’s remorse because something ugly popped out.

I’m a bit of a stickler when it comes to keyboards, as most writers are, and I have zero issues with the Spectre x360’s. There’s an extraordinary amount of travel (1.6 mm) for a modern laptop (are you listening, Apple?), the rebound is decent, and there are no major stupidities where the layout is concerned. Good to go. 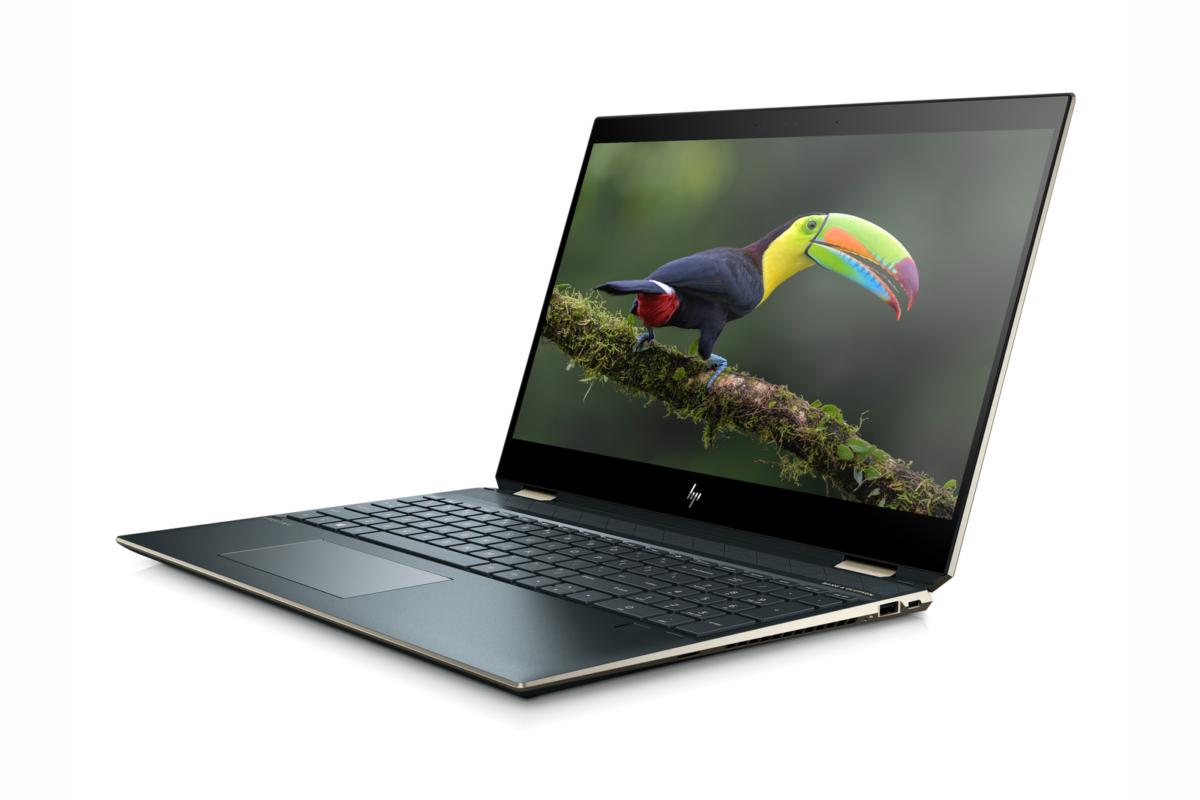 The touchpad is responsive and flexes nicely in the corners for hard clicks. It also supports tap-to-click and multi-gestures. HP includes a stylus for when you’ve fully rotated the display to tablet mode, or whatever your favorite orientation may be when you’re feeling artistic.

Then of course, there’s the touchscreen, which was nicely responsive as well. Such is not always the case with touchpads or screens with my somewhat calloused fingertips.

I never at any time felt like I was waiting for the the Spectre x360 15t touch during normal use, which is pretty much the baseline for computing satisfaction in my book. The combo Optane/NAND SSD’s superfast random access makes an OS feel snappy, though it’s not actually that great a sustained writer.

If you feel the need for statistics, the 15t touch scored 3,180 in PCMark 8’s Work conventional test, which is quite good, though slower than the LG Gram 14T990 with the same CPU and memory. The discrepancy is most likely due to different thermal and throttling algorithms. While playing the 4K UHD version of Tears of Steel in a constant loop, with the display set to 250 nits’ peak brightness (79 percent on the brightness control), the 15t touch ran for 11 hours and 24 minutes. That’s longer than most users need for a day’s work, though your mileage will vary, of course. Note that the movie doesn’t use a lot of battery-draining plain white compared to, say, a spreadsheet or plaint-text document. With such white-heavy files open, but no work being done, we saw just over 10 hours. 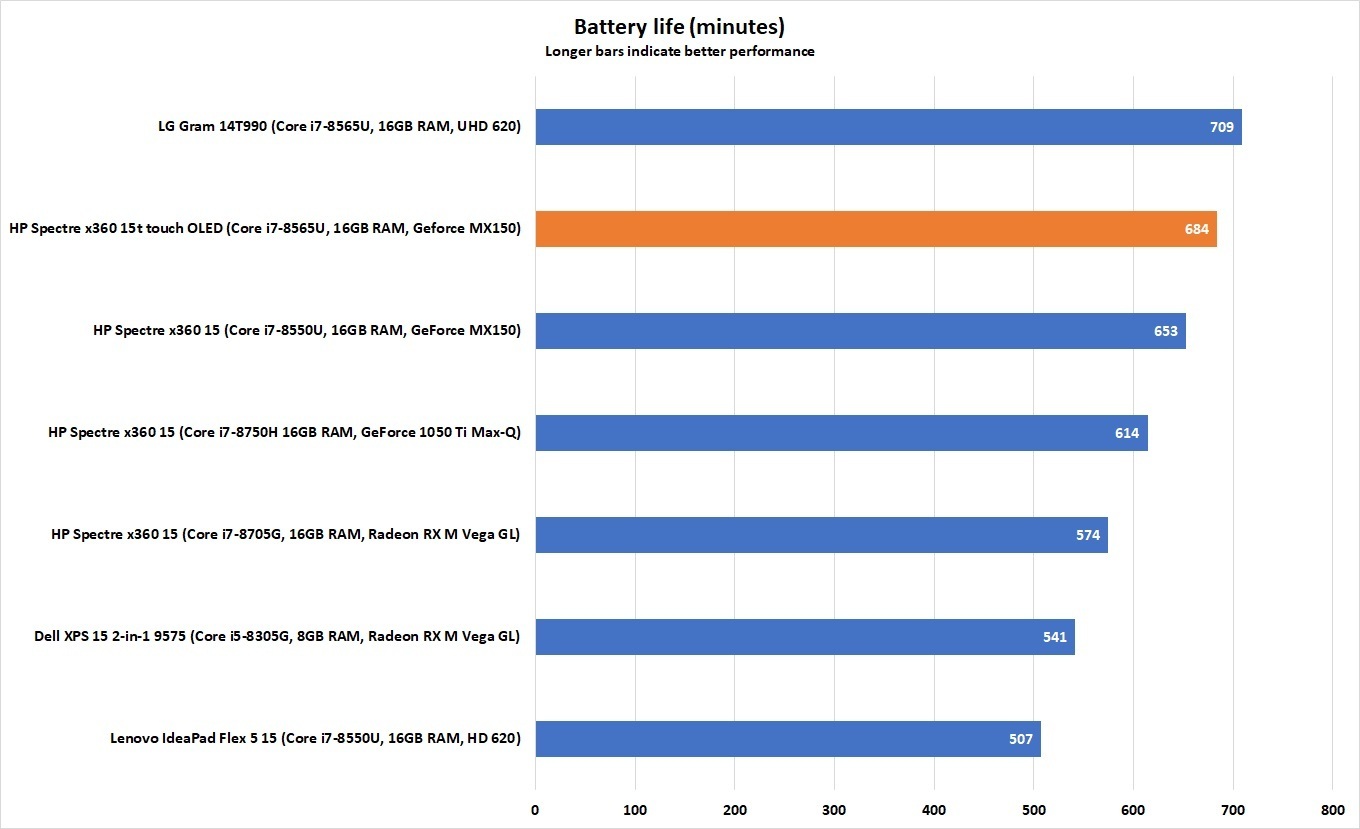 The 15t touch didn’t exactly ace our HandBrake encode test, which imposes some prolonged stress on the CPU, but it wasn’t far behind similarly configured laptops. 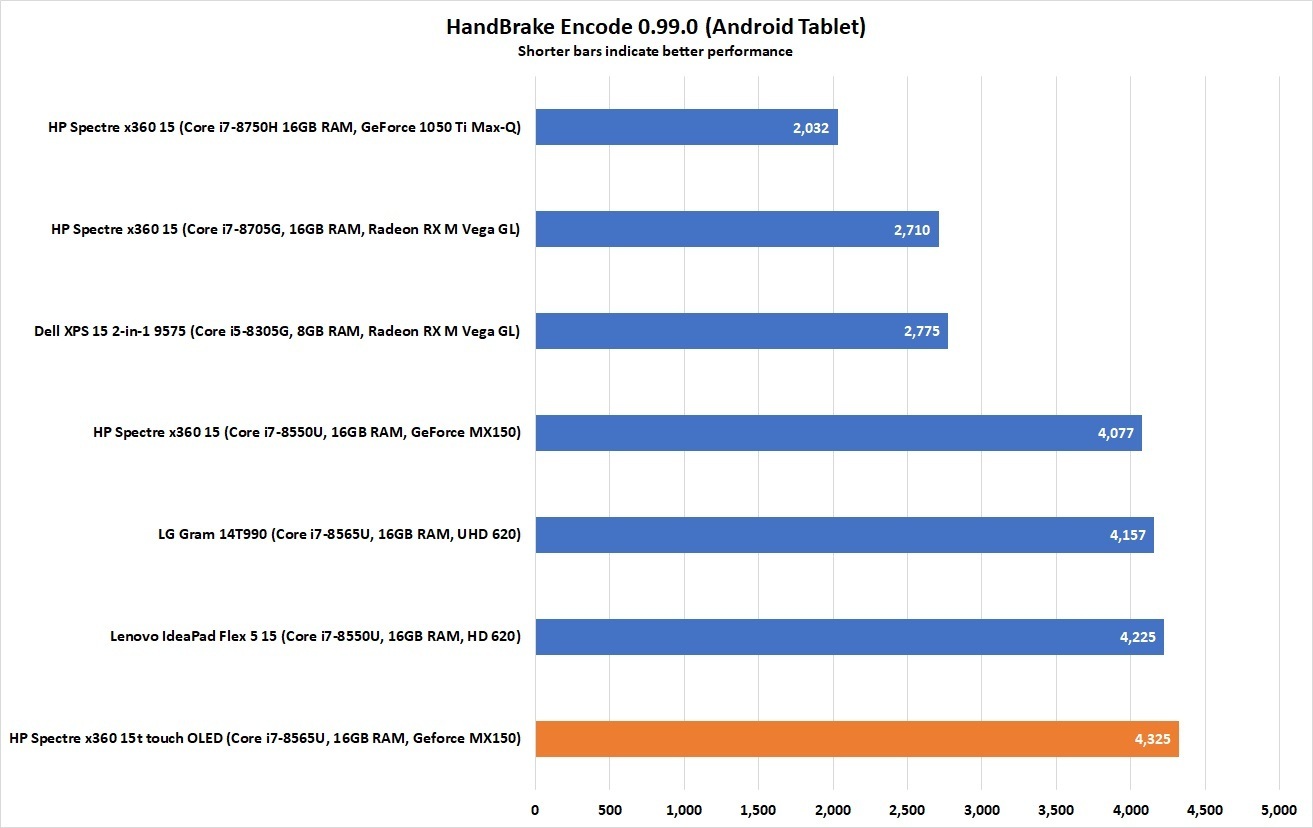 Though the Spectre x360 15t touch isn’t a gaming machine, with its GeForce MX150 GPU you can enjoy the odd shooter when time allows, as shown by the 3DMark results below. 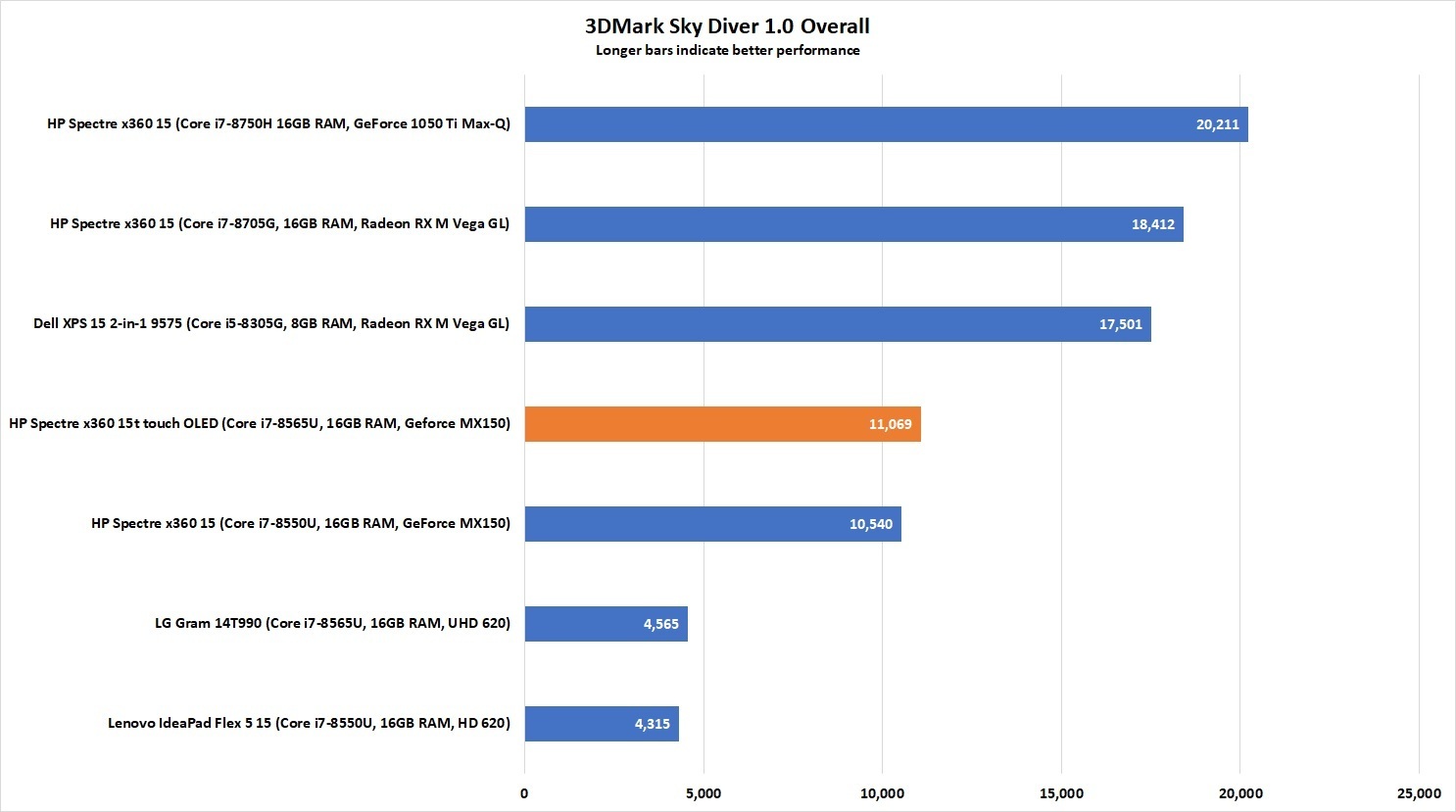 Okay, the x360 15t touch is pricey, and the looks might not float everyone’s boat. It’s also not for the thin-and-light-at-all-costs crowd. However, in my book, and I’m sure that of many others, it’s nigh-on the perfect laptop. The overall performance is great; the display is second to none; the run time is over ten hours; and it supports Thunderbolt and USB 3.1 gen 2 for super-fast peripheral expansion.

My one piece of advice might be to save a couple of bucks and go plain SSD instead of Optane, even given how fast the latter is with small files. Did I mention the copper highlighting?

The HP Spectre x360 15t touch delivers a sublime laptop experience. The OLED display is lush, the keyboard is top-notch, and performance is great for everyday use. The slick design should help you forget the extra weight.

Don't miss a deal at Myprotein
Best offers at Surfdome
Discounts, Sales and Deals at Udemy
Save your money with House of Fraser
Online-Shopping with Farfetch
Best products at Nike DE
Latest Posts