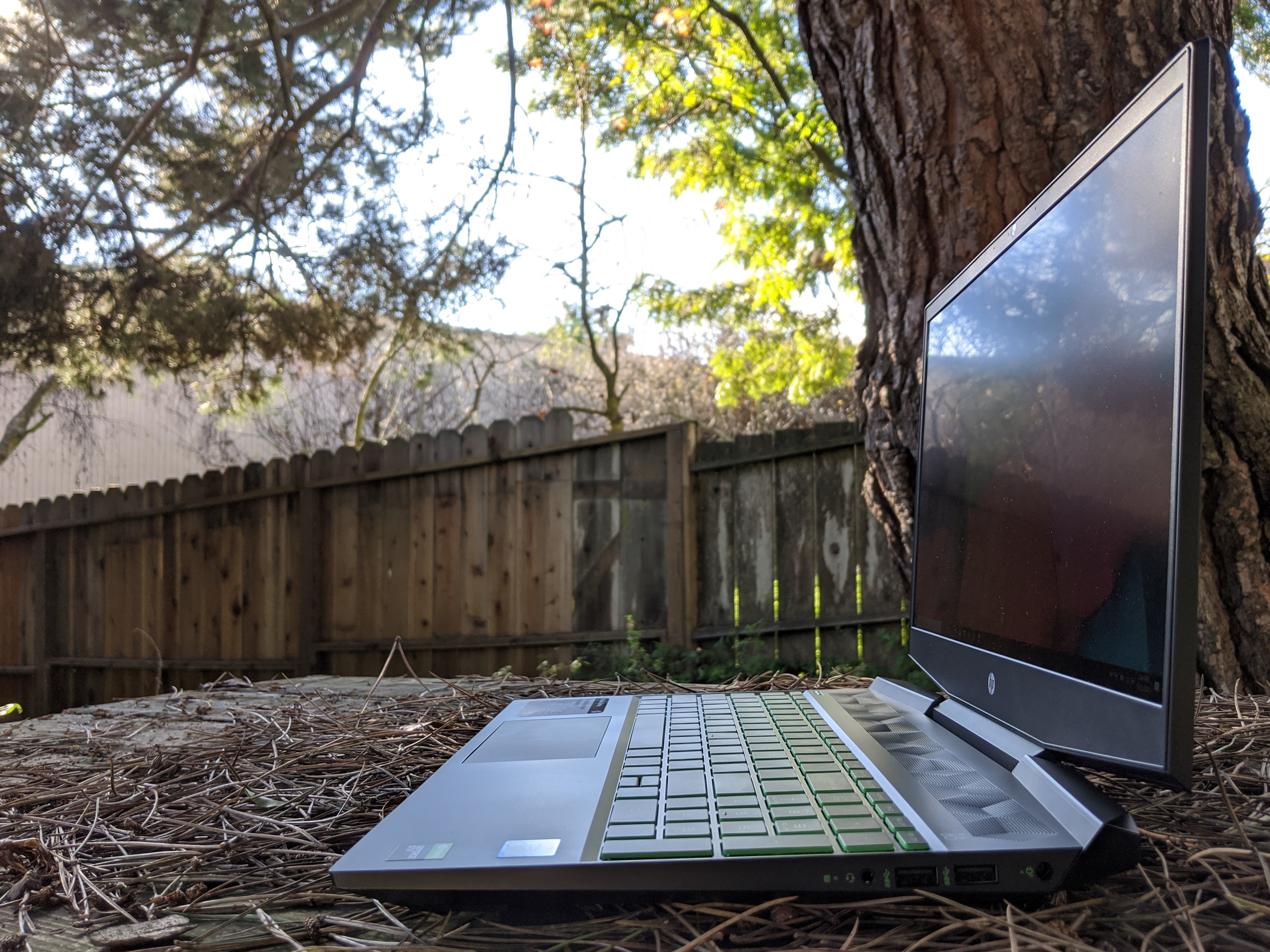 Storage is a place you can skimp, depending on your needs. On hp.com, opting for only the 256GB SSD saves $100, though you’ll be packing games in like sardines at that point. A 512GB SSD might be the better option—still small by modern standards, but more than enough to keep a few games installed at all times, and you’ll still save $50 over the 256GB SSD/1TB HDD combo.

The difference is in the details—some small ones, but also some very important ones. Let’s start with the aesthetics.

The Pavilion Gaming Laptop looks every bit as good as HP’s Omen lineup. It features the same centered hinge as the Omen 17 we reviewed in November, the same almost-rectangular shape. But where the Omen opted for a brushed-metal look inside and outside, the Pavilion goes with a matte-black finish—and a proper HP logo, instead of Omen’s demon-face. 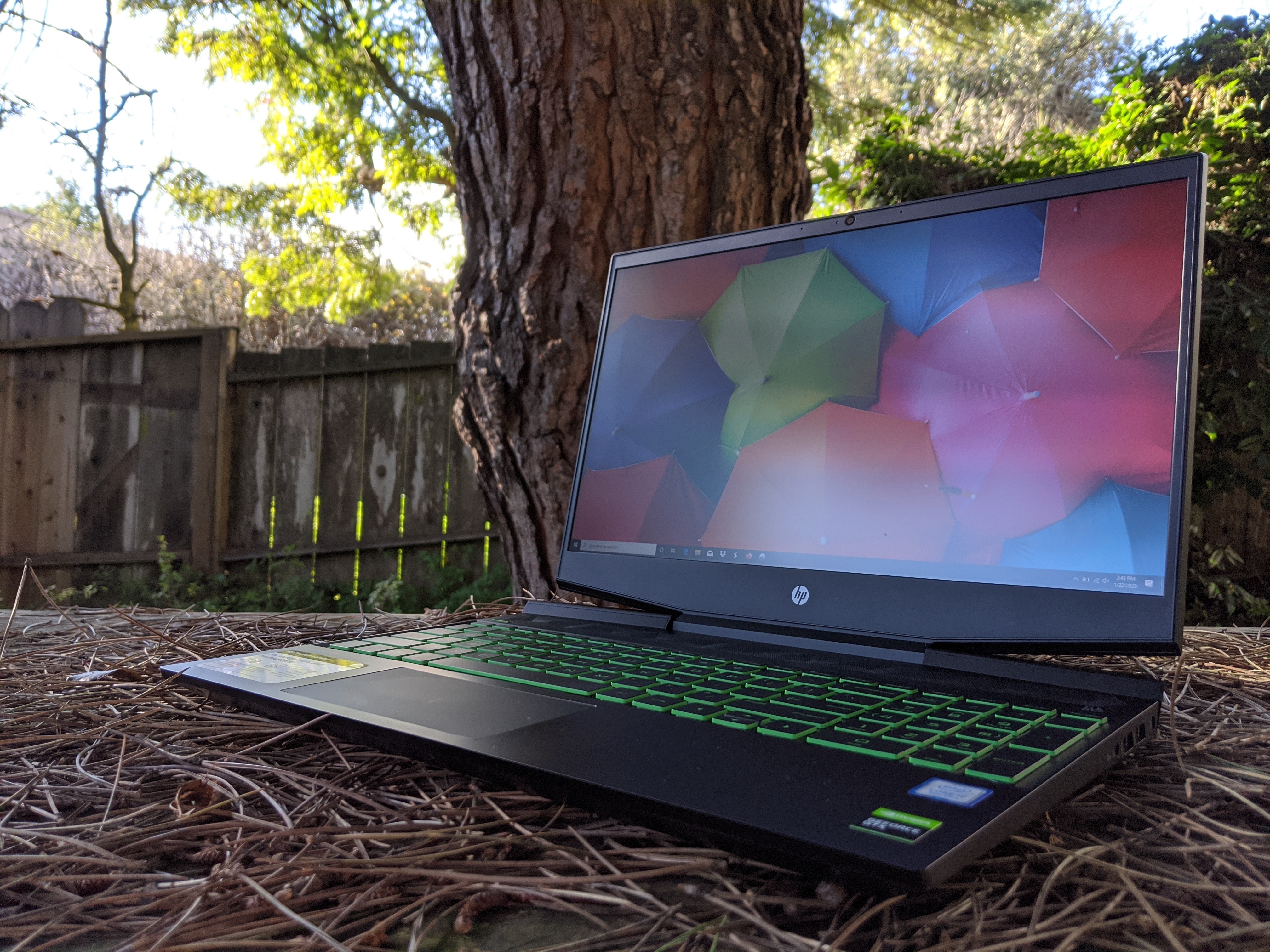 Honestly? I prefer the Pavilion Gaming Laptop to the Omen cousin. It’s a go-anywhere laptop, a day-to-day workhorse that also plays games on the weekends. Even the “Acid Green” variant we reviewed is fairly inoffensive. The electric-green keyboard backlighting invites Razer comparisons, but HP went with a jewel-tone emerald accent for the lid logo that’s eye-catching but not eye-searing, a fine line to walk. I recommend paying $10 for the white logo and backlighting if you really want to blend in, but I have no problem with the Pavilion Gaming Laptop aesthetically.

Unfortunately most of the other differences between the Pavilion and the Omen go in the latter’s favor. First and foremost, the 15.6-inch display. This is an area where lower-cost laptops often skimp, because the display is one of the priciest components.

The Pavilion Gaming Laptop defaults to a standard 1080p IPS screen with a 60Hz refresh rate. Not every laptop needs to be 144Hz or 4K resolution—but it does need to be bright enough to see. I’m frustrated because I just applauded HP for equipping the Omen with a bright 362-nit screen, a rarity for budget-conscious manufacturers. The Pavilion Gaming Laptop tops out at 250 nits plugged in, our baseline for viewing comfort. However, it dims to 200 nits unplugged, far short of that baseline, which we use for battery benchmarking. 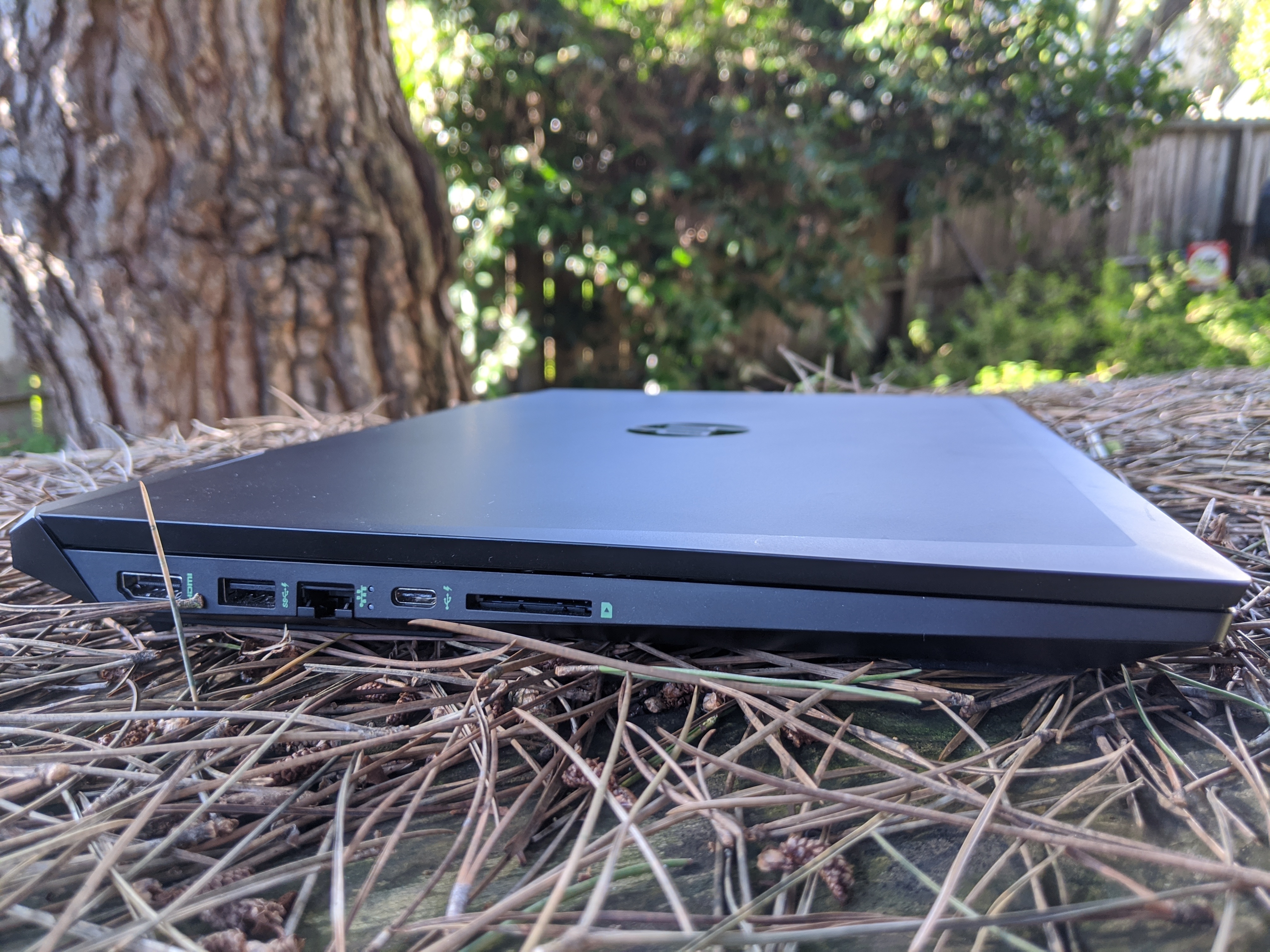 What that means for you depends on your use case. The Pavilion Gaming Laptop is plenty bright with the lights out, so late-night gaming sessions are fine. Even a single overhead light is enough to wash out the Pavilion Gaming Laptops’s display, though, and window glare can be a real problem during the day, especially unplugged. Picture: Those huge glass panes at the airport, and you squinting to see your screen.

HP does offer two additional display options: 1080p at 144Hz, and 4K. Assuming the 144Hz variant is the same used on the Omen though, it’s probably worth the $100 upgrade. That alone would add a half-star to our rating here.

Below the display, you’ll find a row of upward-firing speakers. This, too, differs from the Omen, and I don’t necessarily hate the change in isolation. The Pavilion Gaming Laptop gets loud, and the audio output is reasonably clear. These speakers are decent for watching YouTube, fine for listening to some slightly tinny music, and…well, pretty unpleasant for gaming. Use a headset.

The larger issue, though is that the speakers came at the cost of a larger trackpad and dedicated mouse buttons. 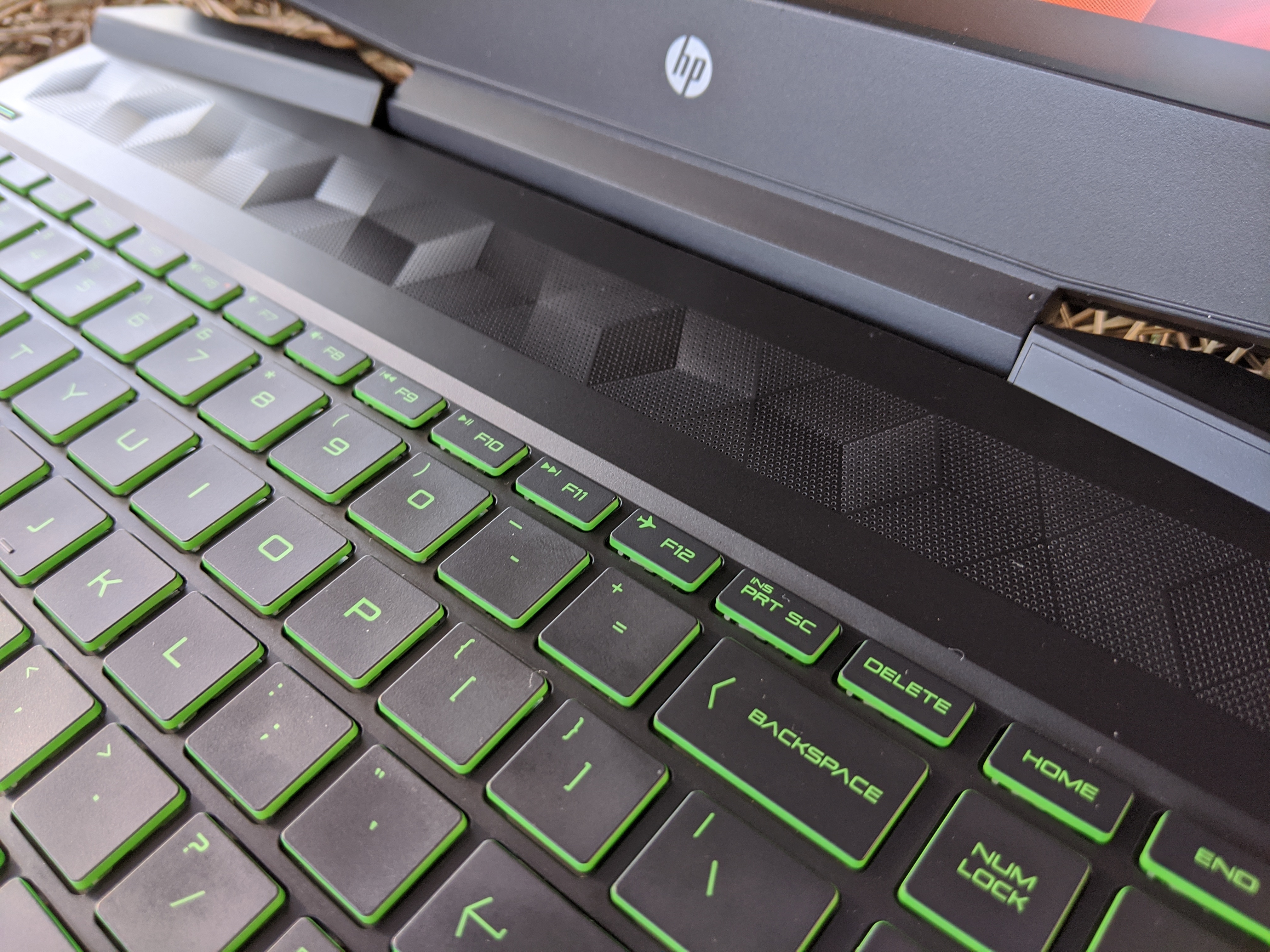 I’ve said it again and again, but I think dedicated left- and right-click buttons are a must for gaming laptops. Sure, you’ll plug in a real mouse for anything serious, but there are plenty of times when I’m on the road without a mouse, or where a mouse isn’t feasible (i.e., airplanes). In those situations, having reliable left- and right-click buttons is crucial to playing even simple adventure games. Tap-to-click isn’t good enough, and it’s a shame HP went that route with the Pavilion Gaming Laptop. It’s the one aspect where head-to-head the Omen definitively comes out on top.

You could also argue the Omen keyboard’s zone RGB lighting is better than the flat single-color lighting on the Pavilion, though that’s less crucial. Just be sure to get the color variant you prefer, either green or white. Regardless, HP’s laptop keyboards continue to impress me. They’re stiff, but with a satisfying click.

Lastly, ports. As I said in our Omen review, “Accolades for putting all the ports on the side.” Too many gaming laptops put important I/O on the rear—great for keeping cables out of the way on a desk, but a pain to access on the road. The Pavilion Gaming Laptop includes power, two USB 3.0 ports, and a 3.5mm jack on the right side, plus HDMI-out, an additional USB-A 3.0 port, ethernet, an SD card reader, and a USB-C port on the left.

Don’t expect record-setting benchmarks here. Yes, we tested the “high-end” Pavilion 15 with a Core i7-9750H, GTX 1660 Ti, and 16GB of RAM, but the quotation marks are there for a reason. What’s high-end for the Pavilion line is solidly mid-tier elsewhere, the reliable family sedan of gaming laptops.

With both the Omen and Pavilion lines, HP opted for Intel’s familiar Core i7-9750H part, allowing us to do some head-to-head testing. And you know what? The Pavilion Gaming Laptop really is an Omen in disguise. Below you’ll see the results of our HandBrake test, wherein we use the free utility to encode a 30GB MKV file down to the “Android Tablet” preset. 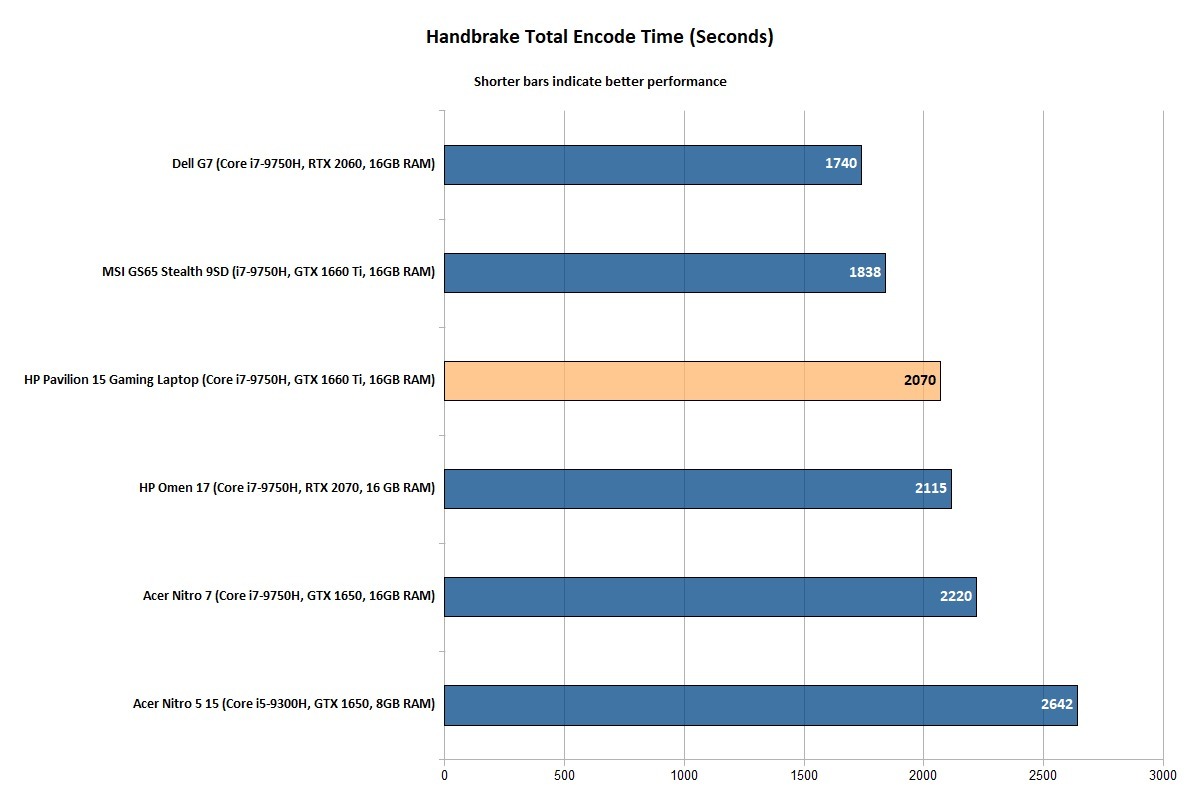 We’ve tested and tested and tested the Core i7-9750H and the Core i7-8750H before it, so any deviation sticks out. Notice that the Pavilion Gaming Laptop drastically underperforms compared to the Dell G7 and MSI GS65—with the Omen 17 sitting right alongside. Both struggled with this task, taking nearly five minutes longer than the norm.

As I said in our Omen 17 review, it doesn’t really matter. Most games are constrained by the GPU, not the CPU. Day-to-day use is unlikely to tax a CPU as hard as HandBrake, and short-burst performance is less impacted, as evidenced by our Cinebench testing below. 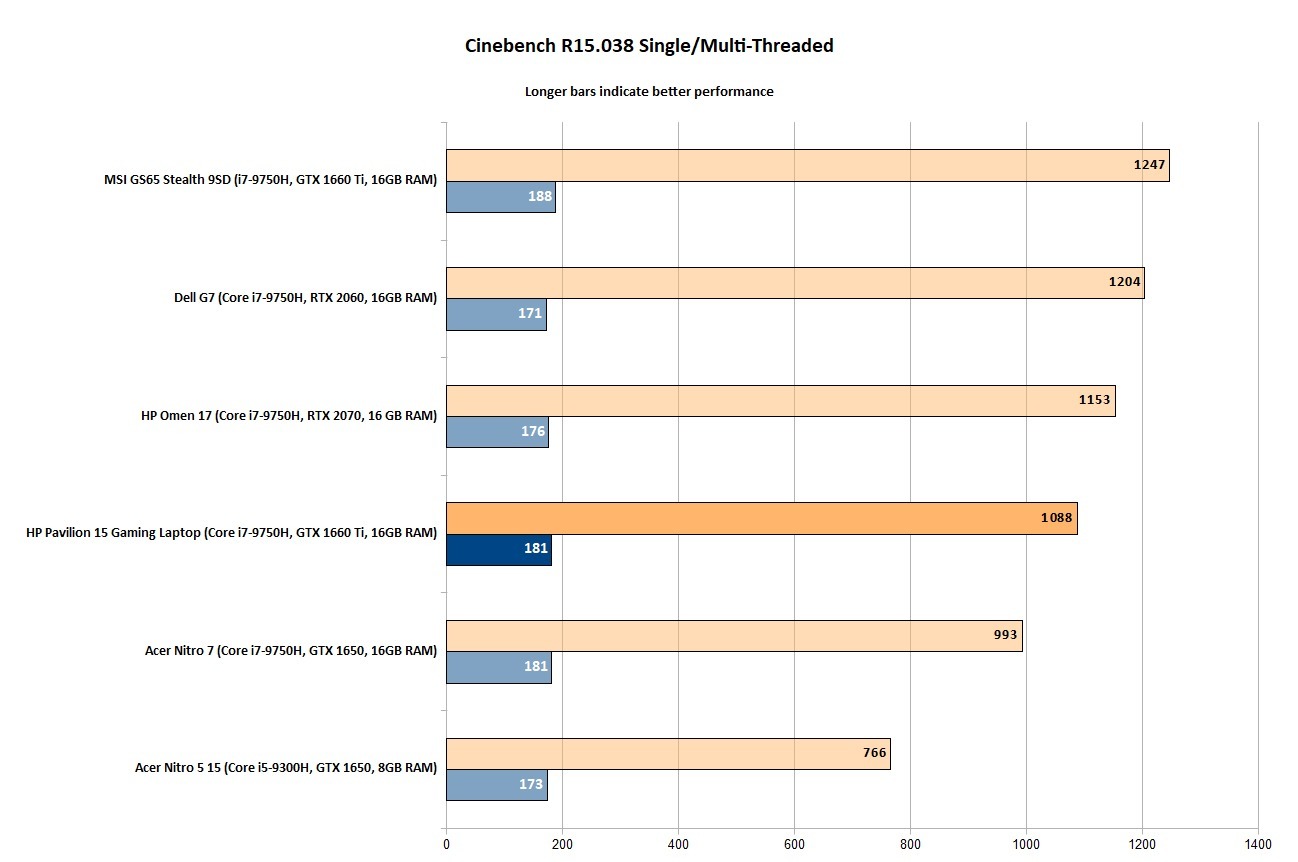 The HandBrake results are interesting, though, if only because there’s a clear relationship between the Omen and Pavilion lines. These really are two flavors of the same laptop, one aimed low-end and one high-end, with some minor overlap in the middle.

I do wish we’d tested an HP Omen with a GTX 1660 Ti so we could do further direct comparisons. Alas, the Omen 17 we tested in November contained a full-size RTX 2070, a high-performance powerhouse.

The GTX 1660 Ti is a humbler card, somewhere between the power of the last-gen GTX 1060 and the RTX 2060, and without the ray-tracing capabilities provided by the latter. It handily beats out the GTX 1650, though—important, given that it’s a lower-cost option for the Pavilion Gaming Laptop. You’re much better off with a GTX 1660 Ti, as evidenced by our 3DMark testing. 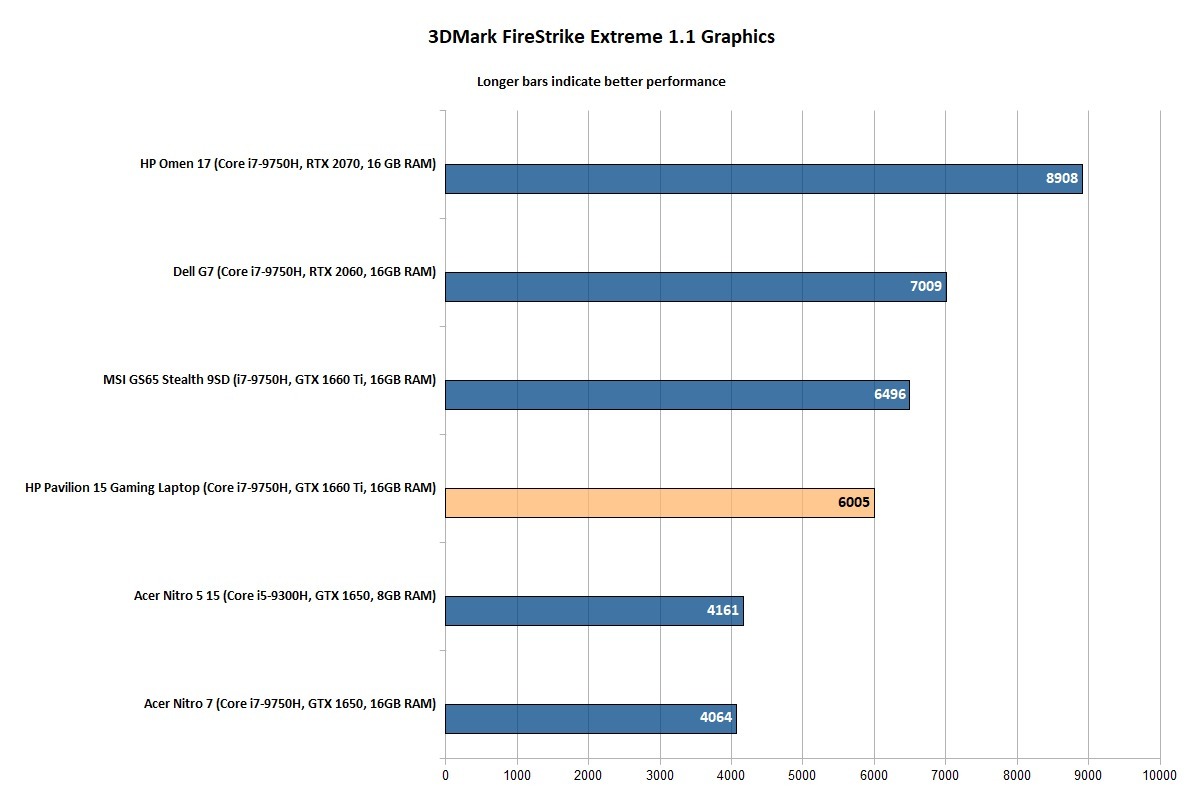 Is the GTX 1660 Ti worth the extra $270 HP charges? That’s a steep price, but I think so. The GTX 1650 works, but barely. With new consoles coming next year, the GTX 1660 Ti is a slightly more future-proofed option. It’s still going to struggle to run newer games with all the bells and whistles, but it should remain viable an extra two or three years longer than the GTX 1650—and by then we’ll be well into the next hardware cycle, and upgrading won’t feel as volatile.

The performance gap is even more evident in real-world testing, where the GTX 1650 struggles to run Shadow of Mordor at Ultra—a six-year-old game—while the GTX 1660 Ti breezes past the 100-frames-per-second mark. Rise of the Tomb Raider is less impressive as that game is more CPU-constrained, but there’s still a jump between the GTX 1650 and the GTX 1660 Ti. 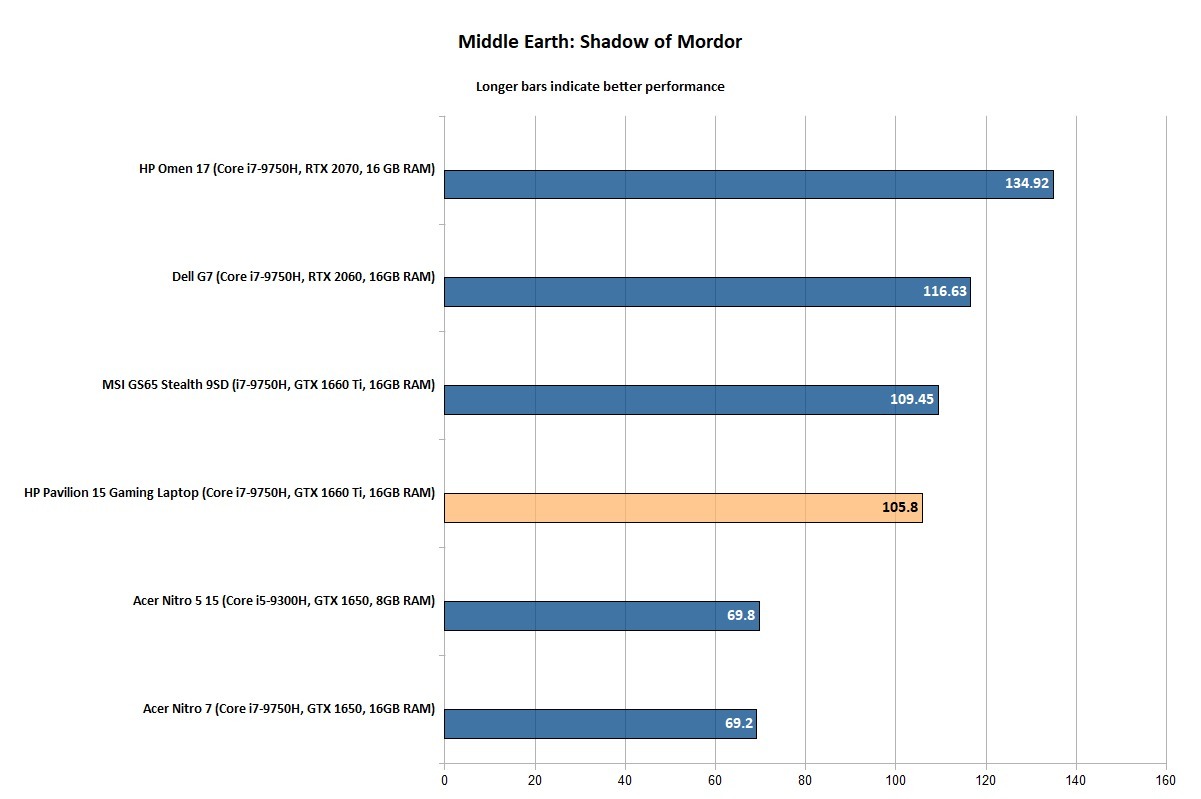 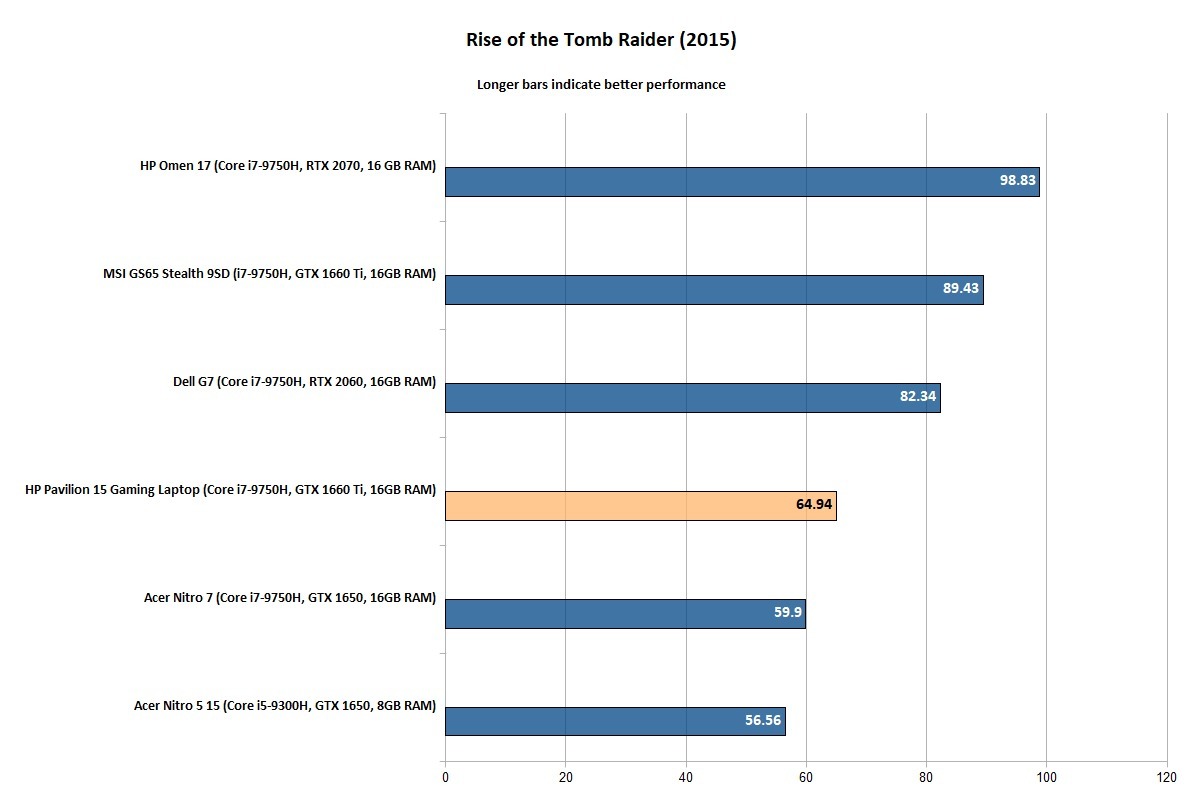 Per usual, we end on battery. Based on our chart below, the Pavilion 15 handily beats the Omen—and several other gaming laptops as well. Lasting well over five hours, battery life is actually very respectable. 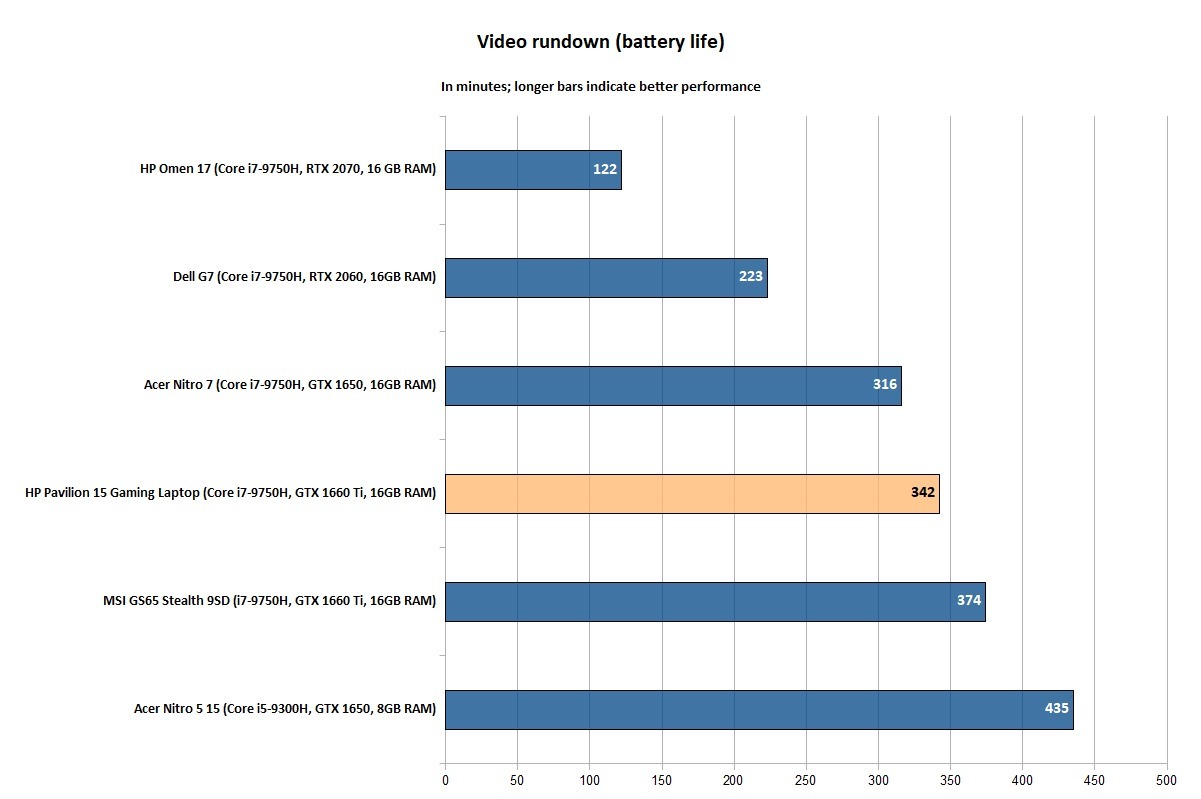 Remember that the numbers don’t tell the whole story. We typically do our battery testing at 250 nits, but as I said earlier the Pavilion Gaming Laptop dims to 200 nits when unplugged. Thus our result here comes with an enormous asterisk, because the screen might be too dark for you to actually use the Pavilion Gaming Laptop, no matter how long it lasts. That said, the Omen 17 we tested had a better screen but terrible battery life. It’s a compromise either way.

I came into this thinking I’d find a pitched battle between HP’s Pavilion and Omen lines. Really, they’re just two sides of a coin. The Pavilion’s your entry-level Omen, whether HP’s willing to call it that or not.

As such, I think the Pavilion Gaming Laptop that we reviewed is a hard sell. It’s close in price to a similarly configured Omen, but with a dismal display and no mouse buttons. You’d be better off spending more for the Omen, I promise.

The Pavilion Gaming Laptop nevertheless punches well above its weight in the entry-level range. If you’re looking for a sub-$1,000 gaming laptop, HP’s built one every bit as sturdy and refined as its high-end counterparts—because at the core, they’re the same laptop. Branding is funny sometimes, eh?

Don't miss a deal at Ticketmaster UK
Best offers at Vimeo
Discounts, Sales and Deals at Virgin Media
Save your money with Vodafone UK
Online-Shopping with FNAC
Best products at Farfetch
Latest Posts