Honor’s latest budget option has the look and feel of a much pricier phone – but should you go Moto instead?

UPDATE: Due to the ongoing trade ban imposed upon Huawei by the US government, we do not recommend that you purchase an Honor phone at this time. As an offshoot of Huawei, Honor’s future is uncertain, and we’d hate for you to purchase a handset that you can only use for a few months.

The original article continues below.

Honor is well known for making solid budget smartphones and its latest models, the Honor 7A and 7C, aim to maintain that reputation. As a subsidiary of Huawei, Honor produces handsets that are geared towards the lower end of the market but despite that, they tend to punch above their weight when compared with similarly priced phones from other manufacturers such as Vodafone and Nokia.

The Honor 7A is a bit of an oddity in the Honor range because it uses a Qualcomm Snapdragon 430 processor as opposed to the Huawei-made Kirin chip range used in most other handsets produced by the Chinese manufacturer.

While strange, it’s nowhere as confusing as the naming system Honor has devised for its various budget and mid-range smartphones, which include the Honor 10, Honor View 10, and the Honor 7A, 7C, and 7X. To keep things simple, the Honor 7A is the lowest cost smartphone in the current Honor 7 range although it isn’t the cheapest Honor phone we’ve reviewed. That honour (sorry) goes to the dubiously-named Honor Holly.

Honor 7A review: What you need to know 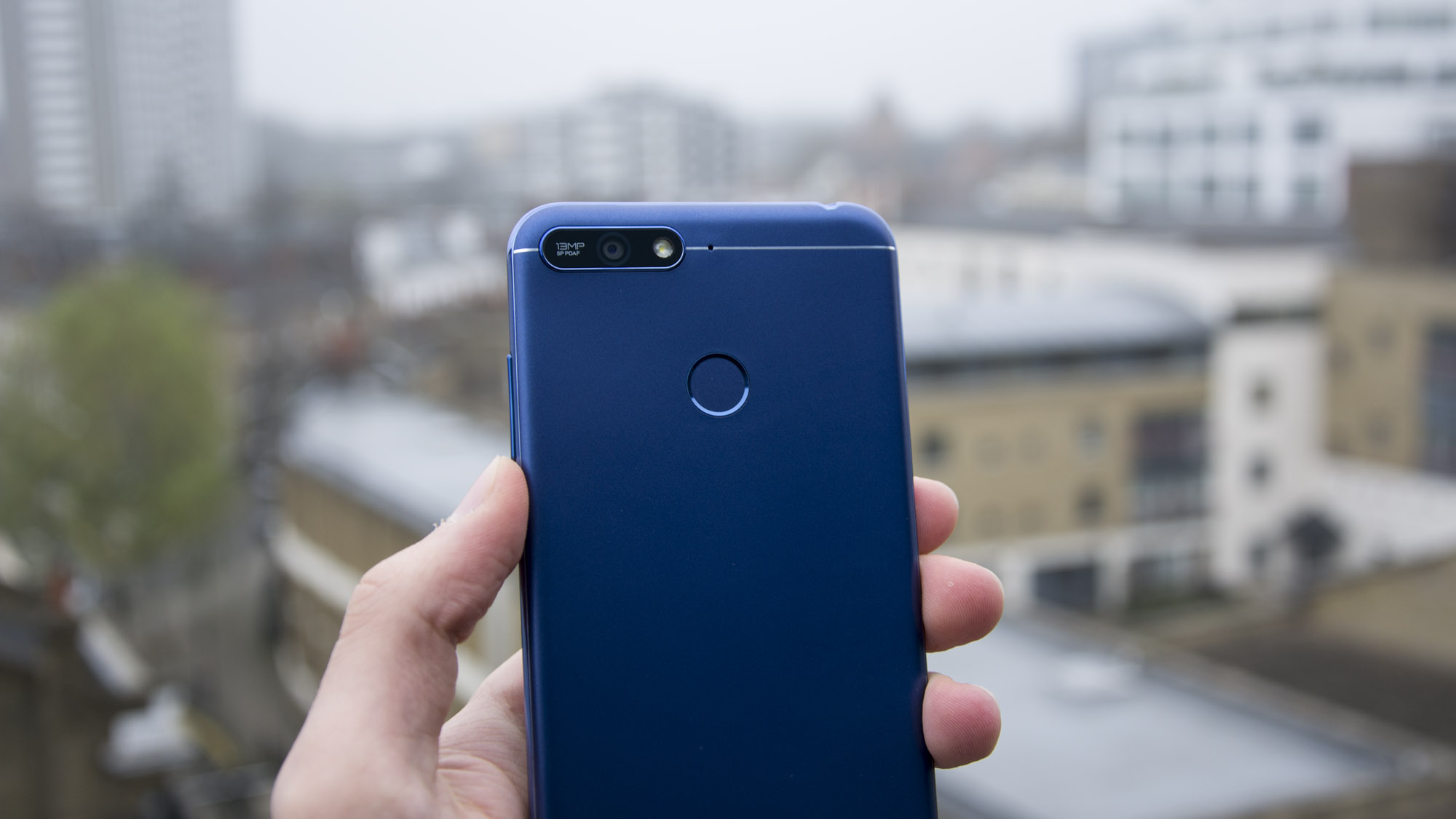 As you’d expect from a smartphone that costs less than £150, the Honor 7A’s specifications are not groundbreaking. It houses an ageing Snapdragon 430 processor, also seen in phones such as the Nokia 6 and Motorola Moto G5, and an underwhelming 2GB of RAM, which means it’s recommended for light use only. Load up numerous demanding applications at your peril.

It does have the appearance and feel of a much more expensive phone, however. It has a nifty triple-stack SIM and SD slot, which lets you load it up with two SIM cards and add an additional 256GB of storage to the limited 16GB internal allocation. It’s slim and light, too, at 7.8mm and 150g.

Honor 7A review: Price and competition

The Honor 7A is also a hefty £80 cheaper than the Motorola Moto G6 (£220), which in our book ranks as the best budget handset of 2018. If you were tempted to splash some extra cash and go for something a little richer, however, the Honor 7X is a more tempting option at only £270. 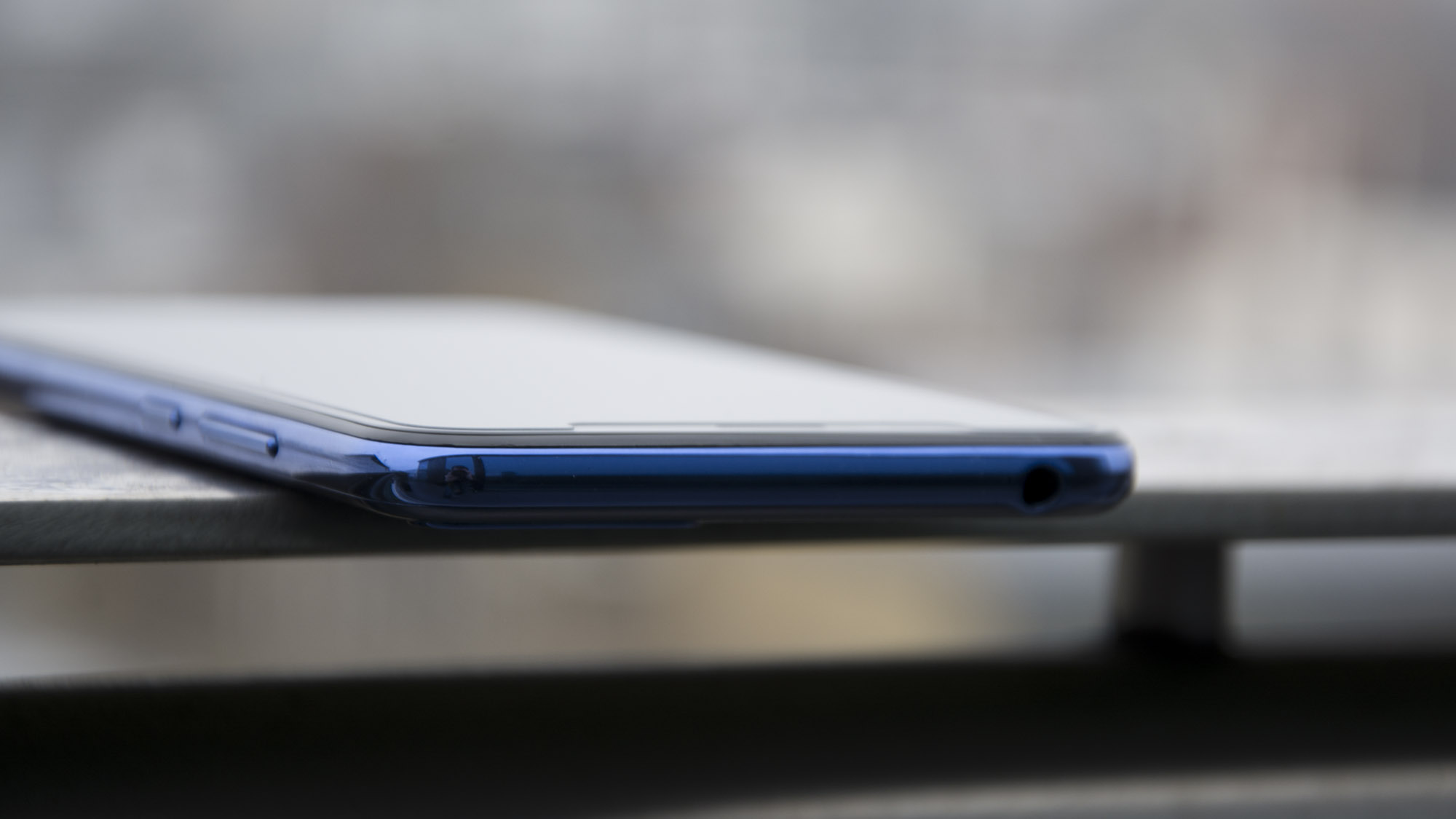 At first glance, the Honor 7A is a pretty little thing. With its tall, slender figure, curved corners, and aluminium frame, it looks as elegant as any number of flagship smartphones released in 2018 – from a distance. Of course, it doesn’t have the glossy glass finish that all the big names have gone for this past year or so and, when you get in in your hand it feels a good deal less impressive. The matte black casing on the rear has a cheap feel to it but on the whole, you’d never guess it’s as cheap as it is if you didn’t know.

As for the physical layout, there’s nothing out of the ordinary here. The power button and volume buttons are both on the right-hand side, the 3.5mm headphone jack is at the top of the phone – and it’s needed as the speaker on the bottom edge isn’t cut out for playing music. Honor says the phone’s speaker goes up to “200% louder” than conventional smartphones, but when the volume is cranked up it just produces a lot of distortion, so you’re hardly encouraged to use that extra amplification. 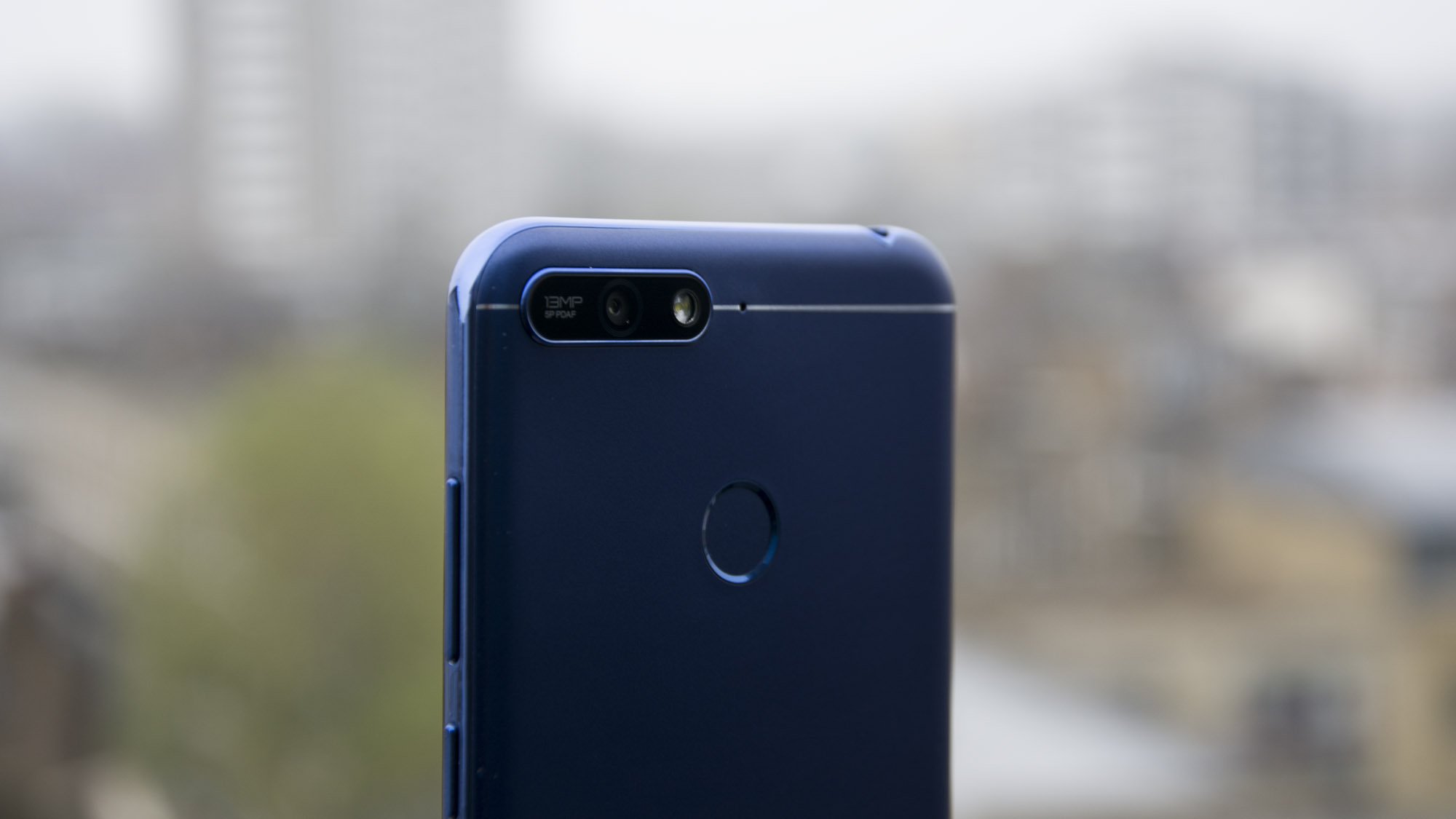 Placement of the front camera and the single rear camera is standard and the same goes for the circular fingerprint reader, mounted in the centre on the rear. Honor has gone for the bruised palette with the Honor 7A as it’s released in just two colours: black and blue.

This is where the 7A stands out. The 5.7in IPS screen ditches the usual 16:9 aspect ratio seen on most budget handsets for a stunning 18:9 display with a 720 x 1,440 resolution. Again, it’s not a patch on the very best in smartphone displays, but it’s a lot better than I expected it to be and more than satisfactory for standard web browsing and the odd YouTube video. The Honor 7a’s display is superior to that of the impressive Vodafone Smart V8, its closest rival in terms of both specifications and price. 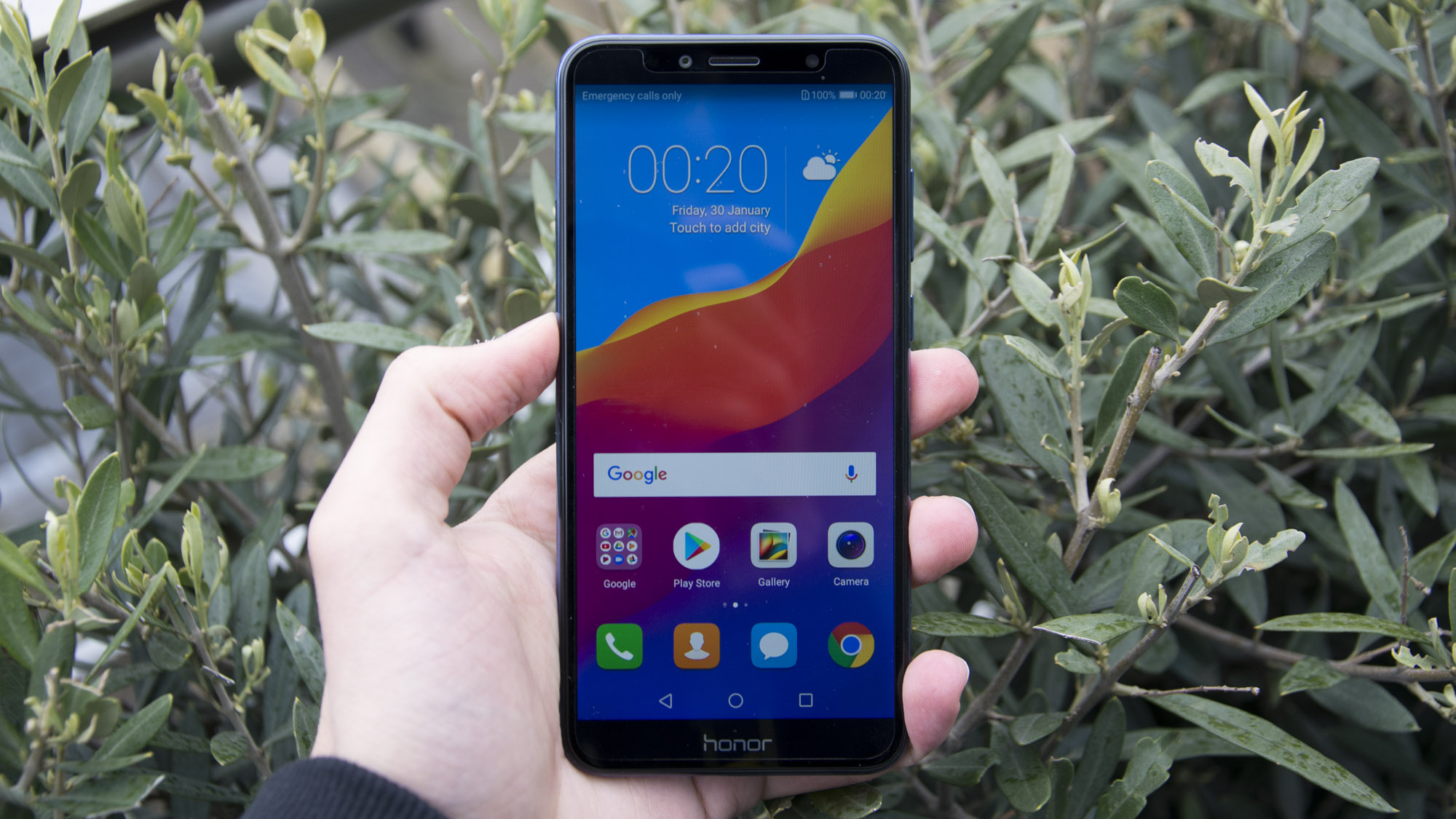 The Honor 7A’s display covers 80% of the sRGB colour gamut, not bad for a phone of this price, although not exceptional. Its colour range is only 5% less than the Honor 7X, a tiny margin considering the 7X is £150 more expensive.

And while your blues, purples, and reds won’t be represented quite as accurately as on a more expensive phone, such as the Honor 10 and Honor View 10, it’s nothing drastic. As for brightness, max output is 432cd/m², which is fairly standard for a low-end phone and means you’ll need to shield the display or seek some shade to read it on a bright, sunny day.

Honor 7A: Performance and battery life

The Honor 7A performed as expected in our benchmark tests. It’s powered by the Qualcomm Snapdragon 430, at one time an excellent processor but now three years old, and its performance reflects that. 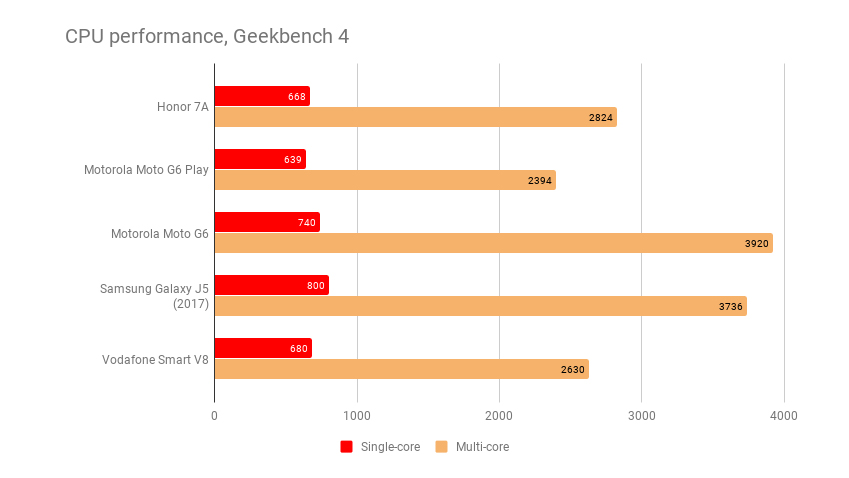 In the GeekBench 4 test, it gained a single-core score of 668, which is nothing special but it’s roughly on a par with the Moto G5 and Vodafone Smart V8 when it comes to multi-core speeds, with 2,824. It only beat them marginally, though, and these speeds are by no means the best; the 2017 upgrade of the Samsung Galaxy J5, another sub-£200 handset, cranked out a CPU speed of 3,736 with its Samsung-made Exynos 7870 octa-core processor. 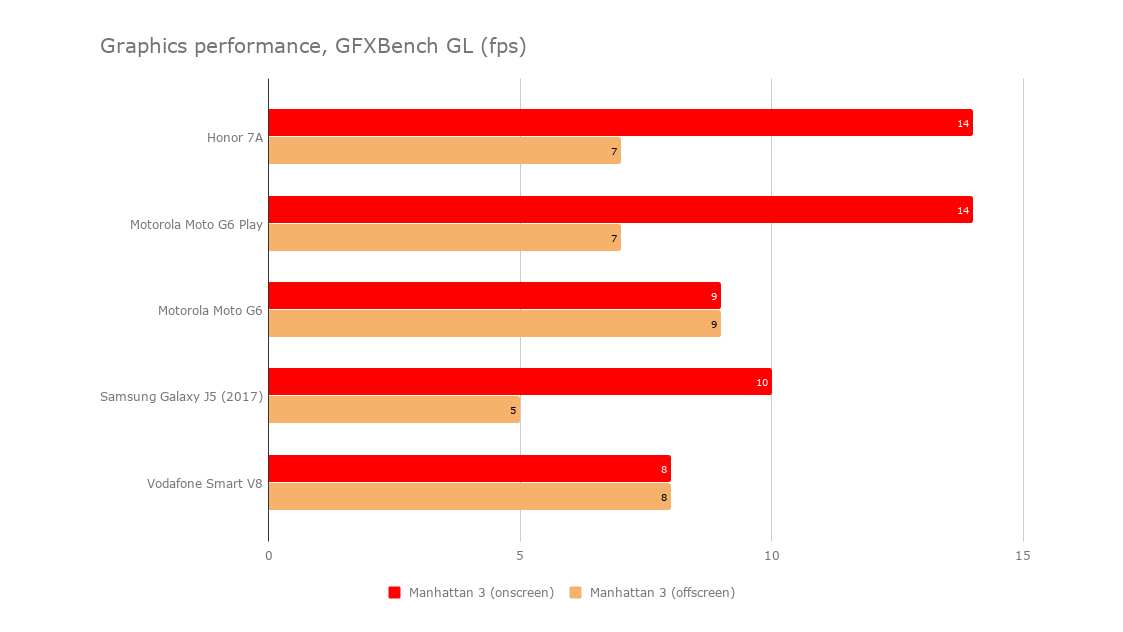 As is typical in budget smartphones, the graphics performance of the Honor 7A is poor. Phones this cheap are simply not cut out for gaming. In the GFXBench Manhattan GPU test, the Honor 7A achieved an on-screen average frame rate of 14fps and only 5.3fps in the GFXBench Car Chase test. This renders more demanding smartphone games virtually unplayable and, if they do run, there will be a heavy cost to the player experience.

In PUBG Mobile, our -favourite in-house testing ground the game informed me upon loading it could only operate at the lowest possible setting. Draw distance was appalling, and even in this low graphics mode the frame rate was shoddy. That said, the Honor 7A still fared better in the GPU test than most of the budget phones in the graph above. 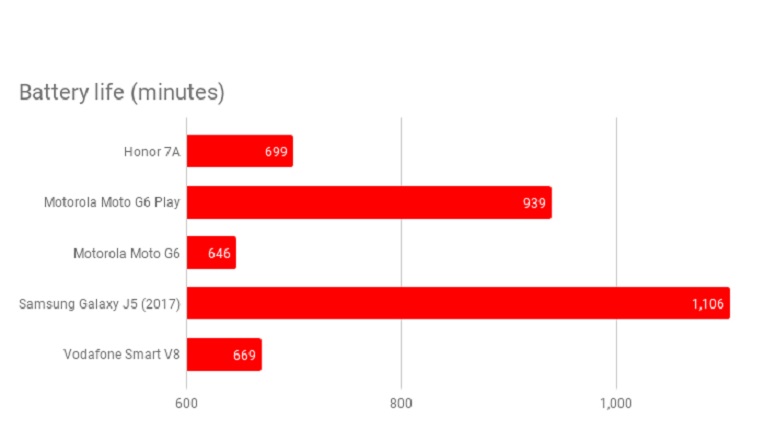 Battery life for the Honor 7A was strictly average: better than the Moto G6 but not by much. During our benchmark video playback test, the phone went from fully charged to dead in 11 hrs 39mins. As you can see from the comparison graph, it’s quite a long way behind the Samsung Galaxy J5, which proves what a budget phone is capable of, lasting six hours longer than the Honor 7A. Still, the 7A should see you through a full day if you only subject it to messaging, phone calls, and moderate application usage. 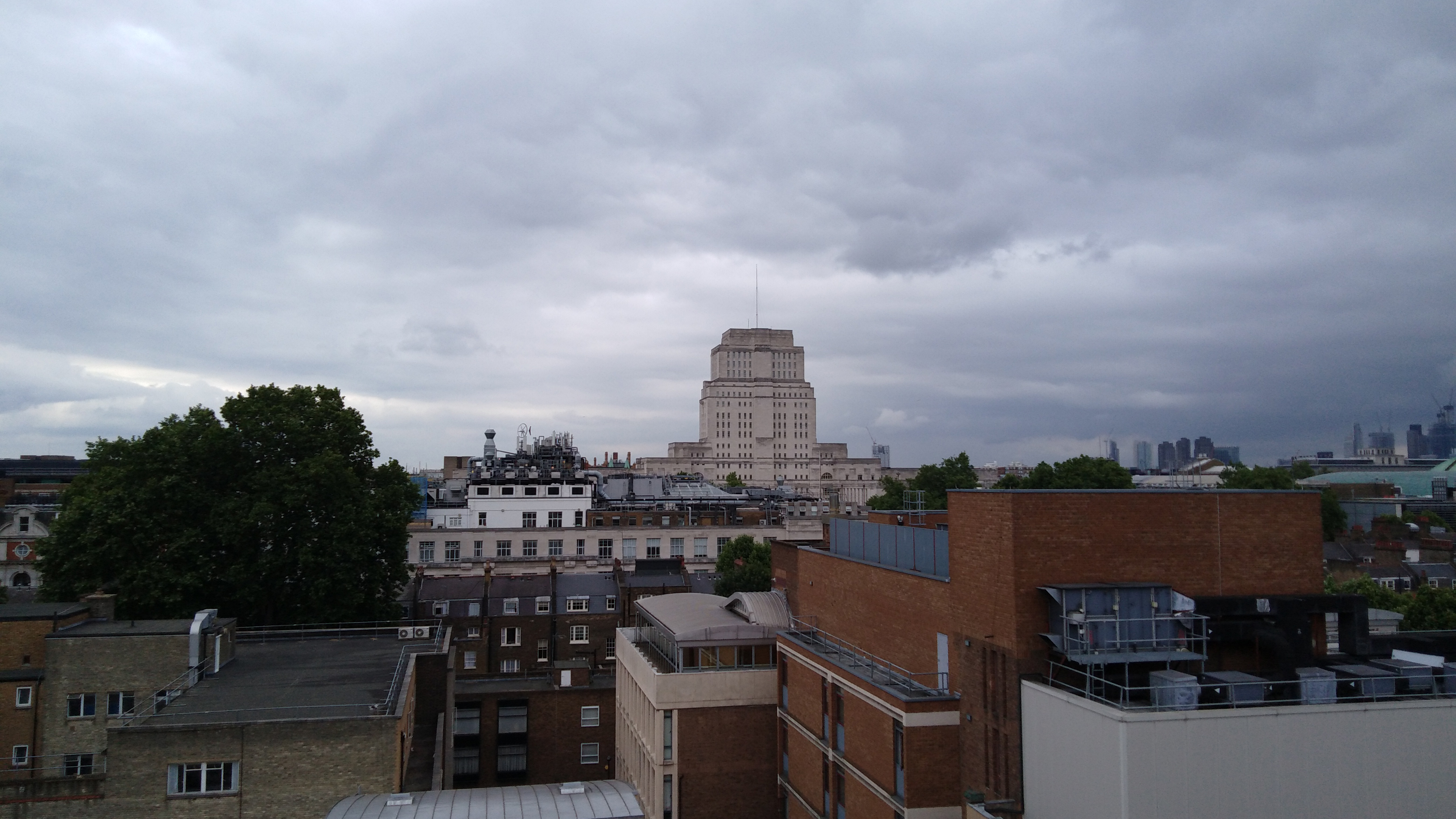 As for the Honor 7A’s cameras, they’re the phone’s weakest aspect. You get an 8mp camera on the front and a 13mp with dual-tone LED flash on the rear. As with other budget Honor phones, the 7A camera capabilities are limited to a few basic features, such as panorama, night, and Bokeh mode. There’s no Optical Image Stabilisation (OIS) or Phase Detection Autofocus (PDAF) either, which is disappointing.

What’s more disappointing is that it seem incapable of capturing good-looking results in anything but perfect conditions. Our test photographs were noisy, grainy and murky with poor exposure judgement both indoors and outdoors. If you want a phone with a good camera for this sort of money, choose the Moto G6 or Moto G6 Play instead. 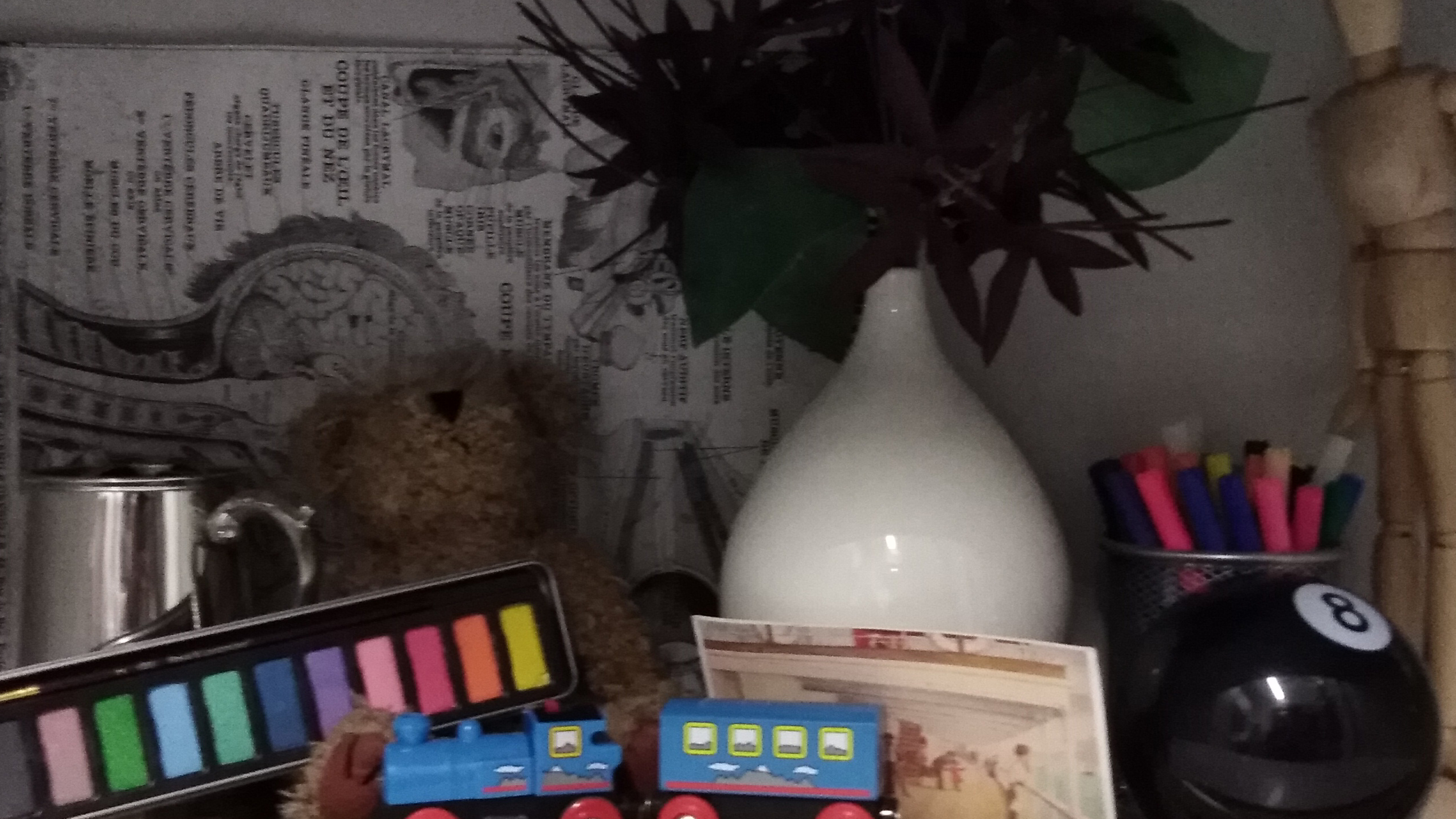 One feature worth noting is that the front-facing camera has a feature called Soft Light which can be toggled using the phone’s camera app. Designed for taking selfies in dim lighting, Soft Light employs the screen as a makeshift flash so you don’t end up with horribly noisy, grainy selfies. It’s a nice feature but fails to lift the Honor 7A’s camera above the deeply, deeply average.

The Honor 7A ships with Android 8.0 Oreo, having just missed the window for Google’s OS update to 8.1 at the beginning of June. Layered on top of the Android OS is Honor’s own custom launcher, Emotion UI (or EMUI for short), which plays up bright primary colours and big chunky app icons for a childish appearance. It’s important to note that the UI is not as responsive as it should be. Sometimes you have to swipe or tap the screen two or three times to get the desired effect. The more subtle the action you’re attempting, the more likely it is that the phone won’t pick up on your movement. 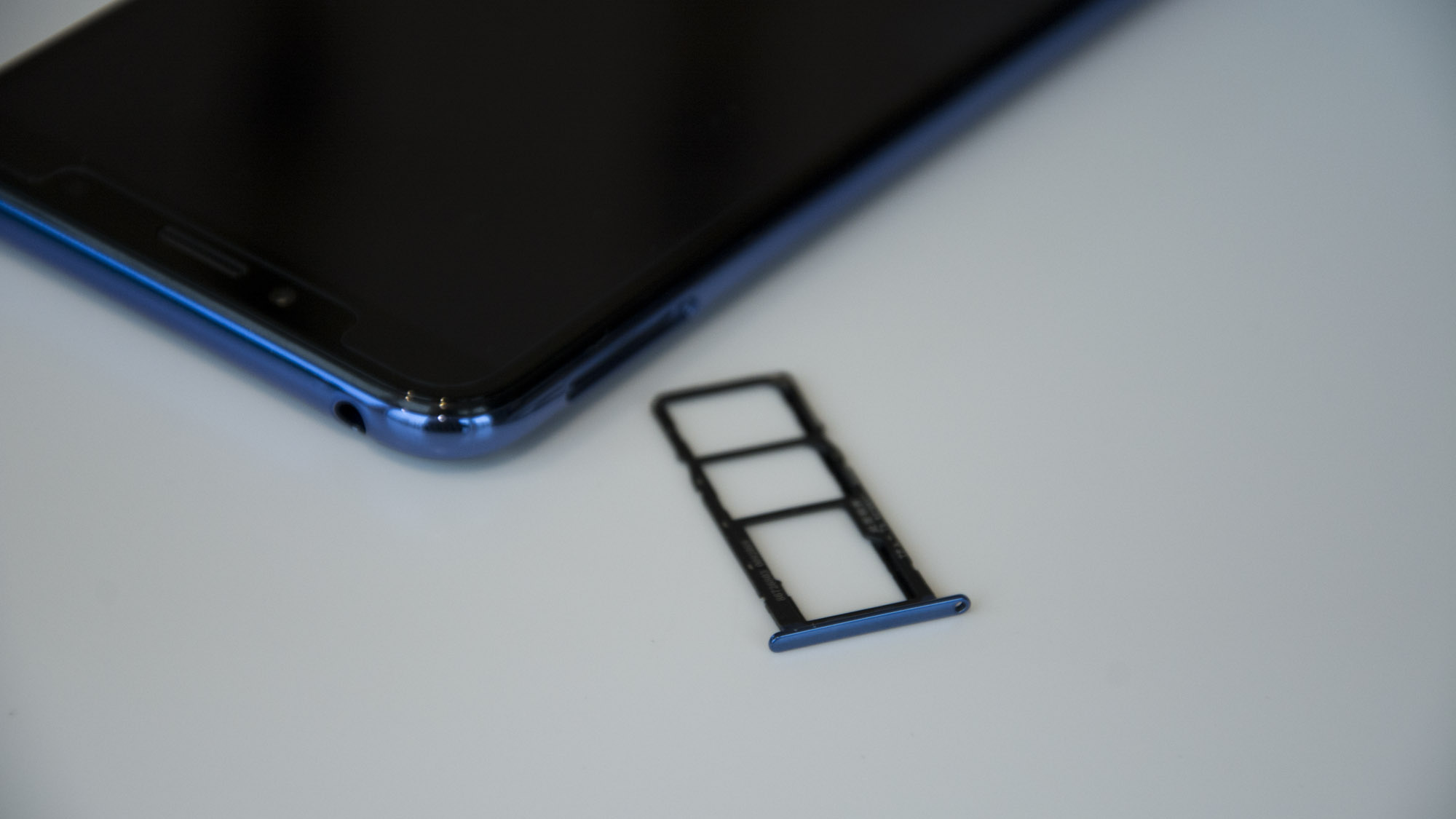 The fingerprint reader, situated towards the top of the phone’s rear, has a tendency to be very picky with finger placement. Once, after several failed attempts, despite my index being placed right on top of the reader, it demanded that I wash my perfectly clean hands and prompted me to use pattern unlock. But there’s another security feature that may be of interest: face unlock.

The Honor 7A is among the cheapest phones on the market to have the feature and it works beautifully, clocking my mug in a split-second. It’s the fastest way to unlock the phone, but keep in mind that it is also the least secure way. Honor someone could hack into your phone by using “an object that resembles you”, which doesn’t inspire much confidence.

Honor has proven, in recent times, to be a master at producing budget smartphones that you’d actually want to buy and, with the 7A, it has gone one step further by edging out the low-end handset competition in key areas such as display and performance. And it has done all that for only £140, making it the best value smartphone yet from the Huawei subsidiary.

Our recommendation would be to save a few pennies more and go for the slightly more capable Moto G6 Play or Moto G6. They’re more expensive than the Honor 7A but worth the extra money for the camera alone.

0 0 0
Previous ArticleXiaomi's First-Quarter Revenue Jumps 27 Percent, Beats Estimates
Next ArticleWindows 10 May 2019 Update is now available – but only for some PCs
Comments (0)