Early impressions suggest the Oculus Touch controllers are exactly what the headset needs to provide a more immersive VR experience, but the lack of room-scaling right out of the box means that the Vive might still have the upperhand.

Oculus Rift might have beaten its closest rival, the HTC Vive, to market, but sometimes being first isn’t everything. Anyone who bought or plans on buying the Rift before December 6 can only use either a traditional gamepad or a keyboard and mouse and watch in envy as HTC Vive owners rock motion-controllers to play their favorite games.

This might not sound like a huge deal, but trust us: when your brain thinks you’re in a virtual world, it immediately wants to interact with things by reaching out and grabbing them and not having a tool to do so can be rough.

Without them, simple things such as picking up a piece of office stationery in Office Simulator, holding a pistol in Space Pirates or controlling a starship in Star Trek: Bridge Crew becomes part of the challenge.

Moreover, while pressing a button to do something is one thing, actually having to move your body to do it brings another level of immersion entirely.

The Touch controllers, from Oculus, and designed for use with the Oculus Rift, are the company’s attempt to integrate motion controls into its VR ecosystem, and while they’re a fine attempt, they remain limited by exactly the same problems that are holding back the Rift headset itself. 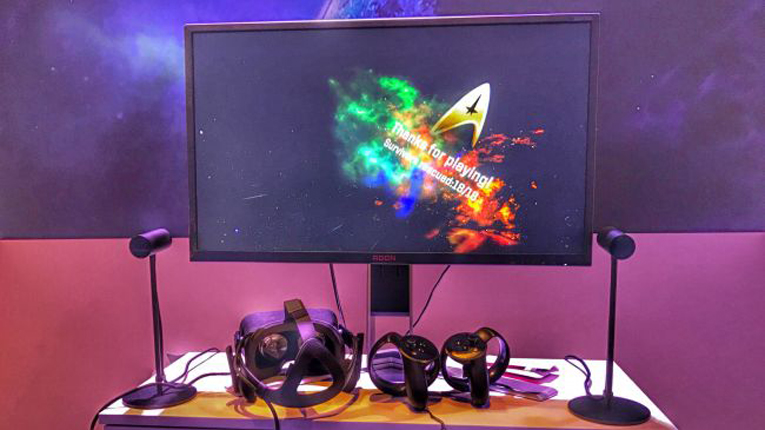 Before we dive too deep into our first run with the final hardware, however, keep the following information in mind: The Oculus Touch controllers will retail for $199 (£189/around AU$265) and will go on sale on December 6.

If that $199 price sounds like a lot, it’s because each controller package will also include two games, VR Sports Challenge and the Unspoken, as well as a second sensor to go alongside the first that’s required for the headset.

The Oculus Touch follow a similar design style to the HTC Vive controllers. At one end is a plastic ring, which is use by the cameras to track the controllers.

The rest of the controller is around the size of one half of a gamepad, with two buttons, an analogue stick, and two triggers.

Motion tracking is handled by two cameras, which are placed on your computer’s desk. One camera is already the standard for tracking the Oculus headset itself, and the Touch controllers come with a second for the expanded range of motion that is required to be tracked.

There are two major points of difference between these controllers and the Vive’s.

First is the fact that unlike the Vive, the left and right Touch controllers are actually different. The button layouts are on opposing sides, and while the right controller has ‘A’ and ‘B’ buttons, the left has ‘X’ and ‘Y’. 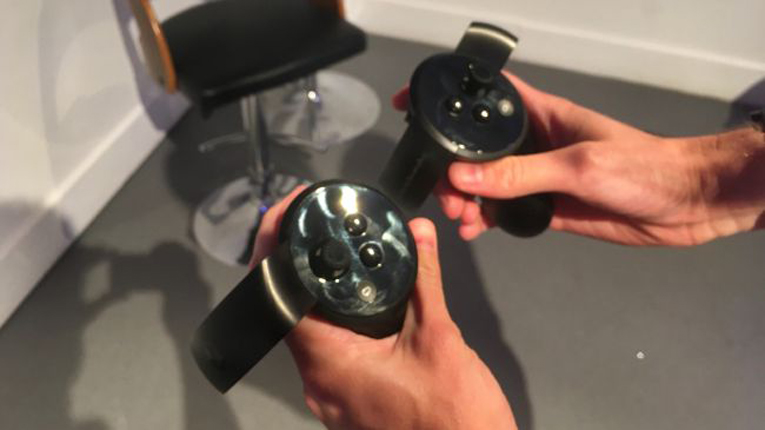 Fundamentally this doesn’t change much about how you end up using the controllers, although it could cause problems further down the line when you need to start replacing controllers.

The second big point of difference is the number of buttons. The Touch controllers have an extra trigger compared to the Vive’s, which sits underneath your middle finger, and because the button has an entire finger dedicated to it, it was practically impossible to miss.

Unlike the Vive, you won’t find a touch-pad on the Touch controllers – this is a button and analogue stick-only affair.

Oculus is promising up to 30 hours of battery life out of the single AA battery that powers each controller. We would have preferred an internal rechargeable battery, but Oculus has opted for removable batteries

Although Oculus’s technology is capable of operating over a similar size of play-space as the Vive’s by using three cameras working in tandem, Oculus has said that its priority remains offering a full VR experience in a small space.

This more restricted playspace is fine when you’re using just a gamepad to play, but motion controllers require a much bigger area for you to move around in.

As such during our play session the motion-controllers would occasionally fall outside of the range of what the two cameras were able to track, and our virtual hands would drift lifelessly (and annoyingly) outside of our control.

Now, granted, some of the blame might fall on the placement of the cameras – which were placed on a desk much higher than what users probably have at home – but it does highlight the fact that you’ll have to be sure to place them correctly in order to capture your full range of movement. 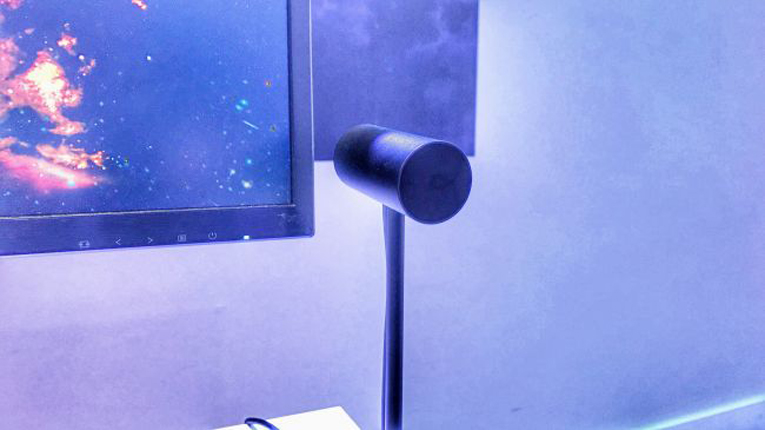 Whether this is preferable to the Vive’s complex setup process, which involves all but wall-mounting its two room-sensors in order to capture the entire playspace, remains to be seen and is a subject we can focus on more when we get the controllers and extra sensors into our own homes.

But what this highlights, for me personally, is that no tracking solution is perfect. You either go to the effort of hooking up sensors across your room to be able to track the entire space, or you have an easier setup that doesn’t have the same range.

At least when the Touch controllers were within range of the sensor, the tracking felt great. It was responsive, and the lightness of the controllers does a great job of making you forget that you’re holding a piece of plastic in the real world, even if it doesn’t remove this feeling entirely.

The addition of a second trigger meant that you didn’t really miss the Vive’s touch pad. Two buttons on the top of the controller, and two triggers round the back felt like more than enough to do everything you needed to, especially since most of the actions we performed were achieved through motion rather than button presses. 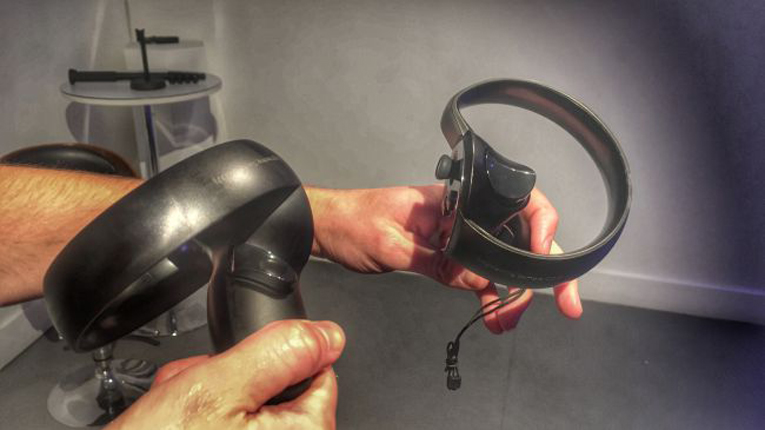 The controllers are also small and light, which means that they don’t get in the way of interacting with the virtual world.

The lack of a full room-sized area to walk around in does make the controller’s overall potential feel more limited than the Vive’s, but the upside of this is that the setup process to use the controllers should be a great deal easier, requiring only a couple of desk-mounted sensors.

Don't miss a deal at Newegg
Best offers at Intuit Small Business
Discounts, Sales and Deals at Currys
Save your money with Marks and Spencer
Online-Shopping with Groupon
Best products at Nike DE
Latest Posts