If you need a rugged tablet, Getac’s slate should definitely be on your shopping list, as there’s little to complain about here.

If you want to make any piece of technology more resistant either to environment or usage, there are two ways to proceed. You can get a generic one and shove it in a protective housing or you can buy a slate which has been designed and built from the ground up as a ruggedised tablet.

The first option will only work in a limited number of cases, most involving jobs where you’re unlikely to suffer bumps or water spills. For everything else, a proper rugged device is the way to go, even if it means having to pay twice or thrice the average asking price of comparable consumer-grade cousins.

Which brings us to the Getac RX10, a ruggedised tablet that was unveiled late last year but is still worthy of a hands-on now, given that the shelf life of commercial devices is significantly longer than the yearly cycles of consumer hardware. 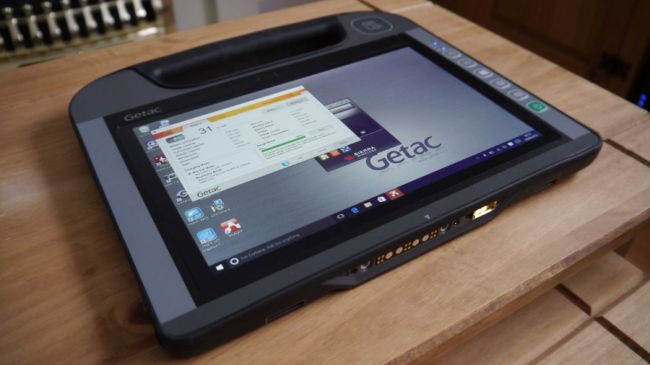 Getac competes, in this line of business, with the likes of Panasonic (with the Toughbook range) and Dell (with the Latitude Rugged) amongst the better known rivals.

And for those who are not familiar with the brand, it was a joint venture launched back in 1989 between Mitac and GE Aerospace Group and is now a wholly owned subsidiary of the former.

Mitac used to sell laptops, PCs and printers, and still continues to operate in the server motherboard (Tyan) and navigation system arenas. Clearly, the focus is on the business sector and this was evident during our brief time with the RX10. 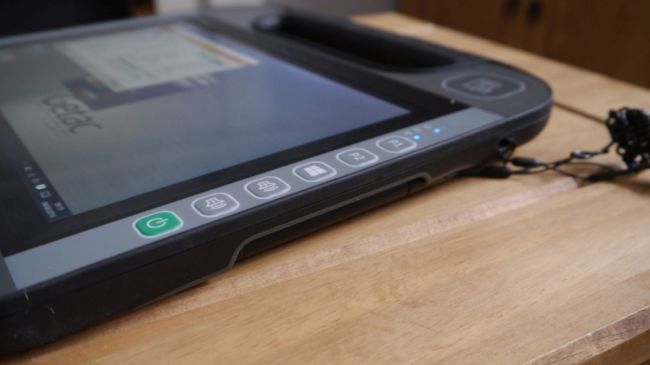 It is a surprisingly light ruggedised tablet at just over 1.2kg. It is not that thick either (sub-19mm) and if you ignore the handle, the actual body of the tablet fits very comfortably on an A4 sheet.

Speaking of that handle, it is both an accessory and integral part of the tablet. Holding the tablet that way feels natural, and the gap is large enough for those with bigger hands, even when wearing gloves.

The RX10 actually embraces a little-known form factor introduced by Intel about a decade ago. The MCA (Mobile Clinical Assistant) targets professionals working in the lucrative medical industry. 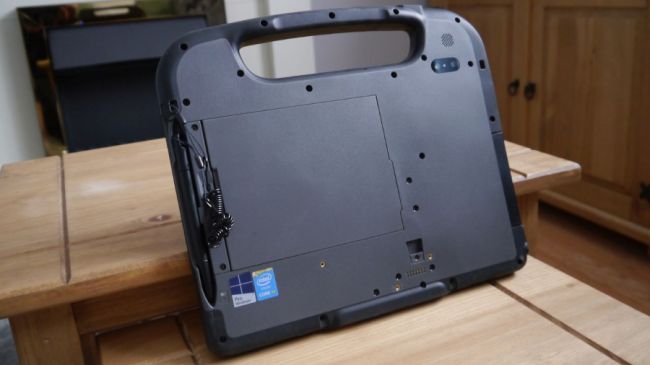 What’s inside the tablet is probably less important than what’s in plain sight. There’s a fifth-generation Intel Core M-5Y71 processor with a base clock of 1.2GHz and Turbo to 2.9GHz. It has 4MB cache, a TDP of only 4.5W thanks to a 14nm process, sports an Intel HD Graphics 5300 GPU and all the add-ons you’d expect for business (vPro, TE, TSX-NI). 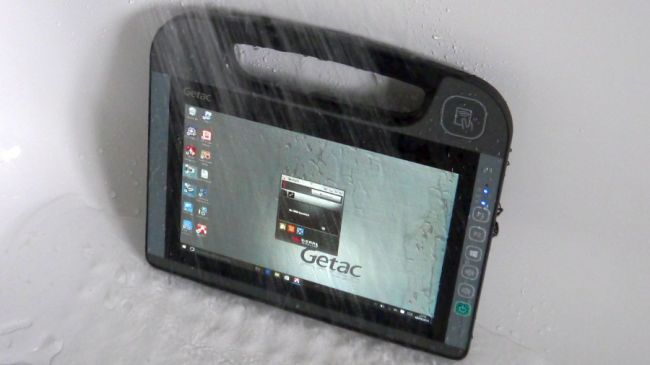 Getac opted for a full HD 10.1-inch display for this tablet which make sense if you want to keep things compact. Anything larger will probably (say 12.1-inch or 13.3-inch) harm portability and ruggedness. The screen uses LumiBond 2.0 technology which means better readability outdoors while improving touch functionality (allowing for usage with dry or wet hands, with or without gloves).

This is achieved by bonding the glass pane with the touch panel and the LCD – the display on the RX10 has a smooth matte finish which dampens its 800-nits brightness. 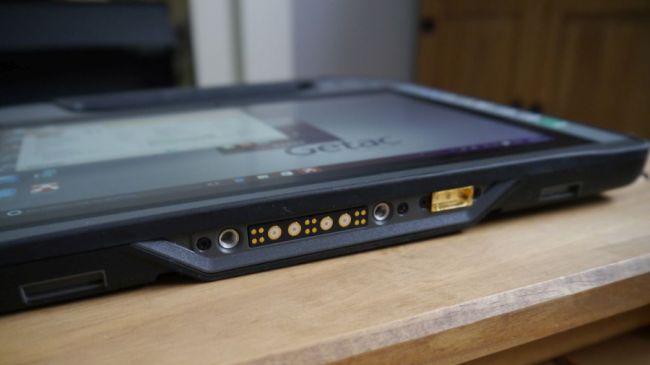 A thicker chassis combined with a small screen means that there is plenty of space for everything else. We’re talking a dedicated GPS, integrated 4G LTE, a TPM 2.0 chip, 802.11ac Wi-Fi, Bluetooth 4.0, a tethered stylus, an NFC/RFID card reader, a barcode scanner, triple pass through antenna ports and behind a protective flap, there’s one USB 2.0 port and a USB 3.0 port, as well as audio and HDMI micro connectors.

Note that there are no legacy ports or removable card slots on the device itself but – and this is where the RX10 excels – the tablet can be connected to a wealth of accessories. Docking stations, external battery chargers, detachable keyboards, kickstands (there are three types of these) and so forth. The battery bundled is a 32Whr affair and Getac added a nifty feature that gives users up to a minute to swap out the battery. 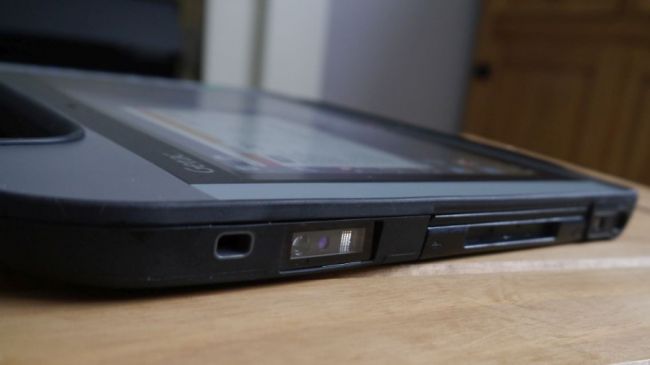 There’s a rear and front camera, one single speaker and a column of buttons and status lights next to the display. Pressing the P2 button brings up the settings while P1 fires the front-facing camera.

As expected, the device is fully MIL-STD 810G and IP65 certified (totally protected against dust and it also offers protection against low pressure water jets) and is also shock and vibration resistant. It is not water resistant but it should be protected enough for most jobs that adhere to health and safety regulations.

The RX10 runs Windows 10 Pro with downgrade rights to Windows 7 Pro and comes with a standard three year bumper-to-bumper/pack-and-collect limited warranty. Getac bundled its own utilities: a camera utility, system-focused centre and a barcode manager. There’s no bloatware in sight and that’s a very welcome discovery.

Clearly given the price and the feature set, the RX10 is not for everyone. This was never Getac’s intention in the first place, and it is good to see that the manufacturer didn’t end up with a half-baked product blighted with the sort of compromises consumer-grade devices usually come with.

All in all, the RX10 is a very solid contender if you’re in the market for a ruggedised tablet. One thing that might be improved is battery life which Getac claims should be up to eight hours, which we assume would be without 4G and with brightness set to minimum. We didn’t get anywhere near that in normal conditions.

So a bigger battery (or even a dual-battery setup) would be most welcome but other than that, there’s very little to improve.

Don't miss a deal at Adobe
Best offers at Newegg
Discounts, Sales and Deals at Argos
Save your money with Ancestry
Online-Shopping with Myprotein
Best products at Vimeo
Latest Posts