Google’s new Pixelbook Go is the ultimate Chromebook for anyone that doesn’t want to spend a grand on Google’s previous Pixelbook. Its astonishing battery life and amazing keyboard are just two of this Chromebook’s selling points, and it has very few downsides for both average users and dedicated fans of Google and Chrome OS.

The Google Pixelbook Go has indubitably brought quite a few things to the table when it hit the streets, especially for its price. Sure, it’s still a bit out of range for some people, price-wise, but it’s certainly more economical and accessible to mainstream users than the Google Pixelbook and other premium laptops out there. In fact, it’s one of those aspirational products for Google’s partners that is actually within reach of most peoples’ budgets, unlike most of Microsoft’s line of Surface devices that are rather inaccessibly priced.

The Google Pixelbook Go isn’t perfect. It doesn’t scale particularly well through its mid-range and high-end configurations, for one. And, we’d also love to see some more features for the asking price, particularly a biometric login option. However, you’re also getting some tech here that’s not even seen in Apple’s priciest laptops, mainly a 1080p webcam. Plus, it features a remarkable battery life and debatably the best laptop keyboard we’ve ever used. 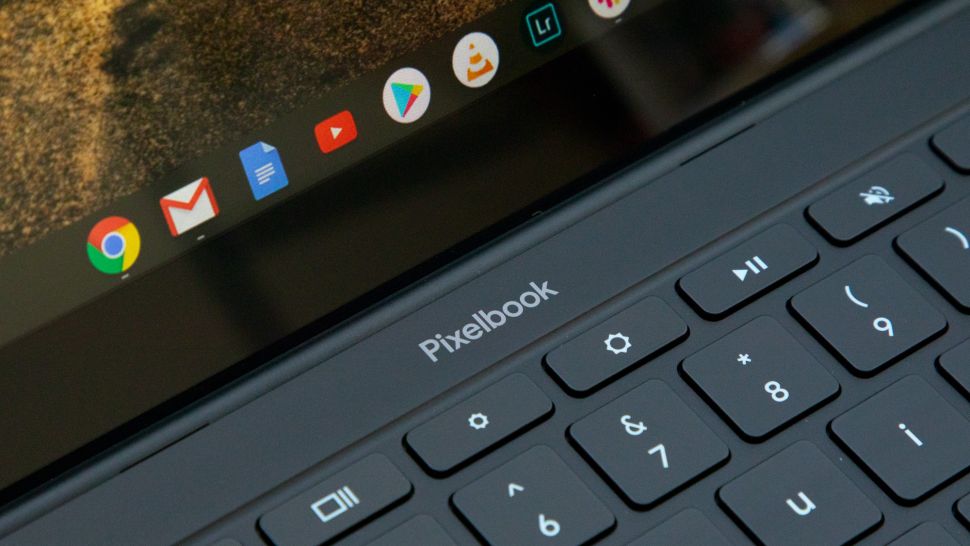 Admittedly, Google is still demanding quite a bit with its cheaper flagship Chromebook at the onset: $649 (£629, about AU$950) for 8GB of memory (RAM) and 64GB of storage with an 8th-generation Intel Core m3 processor (CPU) and Full HD (1080p) LCD touchscreen. Here’s how the rest of the pricing breaks down:

As you can see, while the Google Pixelbook Go is meant to be an alternative to the Google Pixelbook proper, which will still be available, the Go can get close to that higher-end laptop’s price very quickly if you’re not careful. This, eventually, kind of defeats the point of the product’s positioning altogether.

If you’re going to drop $999 on a Pixelbook Go, you might as well buy the Pixelbook proper, with its sharper display, hybrid features and stylus support. That said, you are getting some features in the Go that just doesn’t come in the Pixelbook, like a 1080p webcam and up to two more hours of battery life.

Still, it should be noted that for just $50 more than the mid-range Pixelbook Go – when it’s on sale in the US – you can purchase a 2019 MacBook Air with twice as much storage, a sharper display, better Thunderbolt 3 ports, not to mention the overall allure of a full macOS system.

At the entry-level, there are some similar Chromebooks that beat the Google Pixelbook Go on price, such as the 14-inch Asus Chromebook Flip, which offers a full 2-in-1 experience for $50 less in the US. Likewise, you’ll find a practically identical situation with Samsung’s Chromebook Plus V2 at $599 in the US.

Regardless, when it comes to premium Chromebooks, the Pixelbook Go is mostly unmatched in its particular benefits and features it offers, such as super long battery life, a 1080p webcam and one of the best keyboards we’ve ever had the pleasure of using on a laptop. 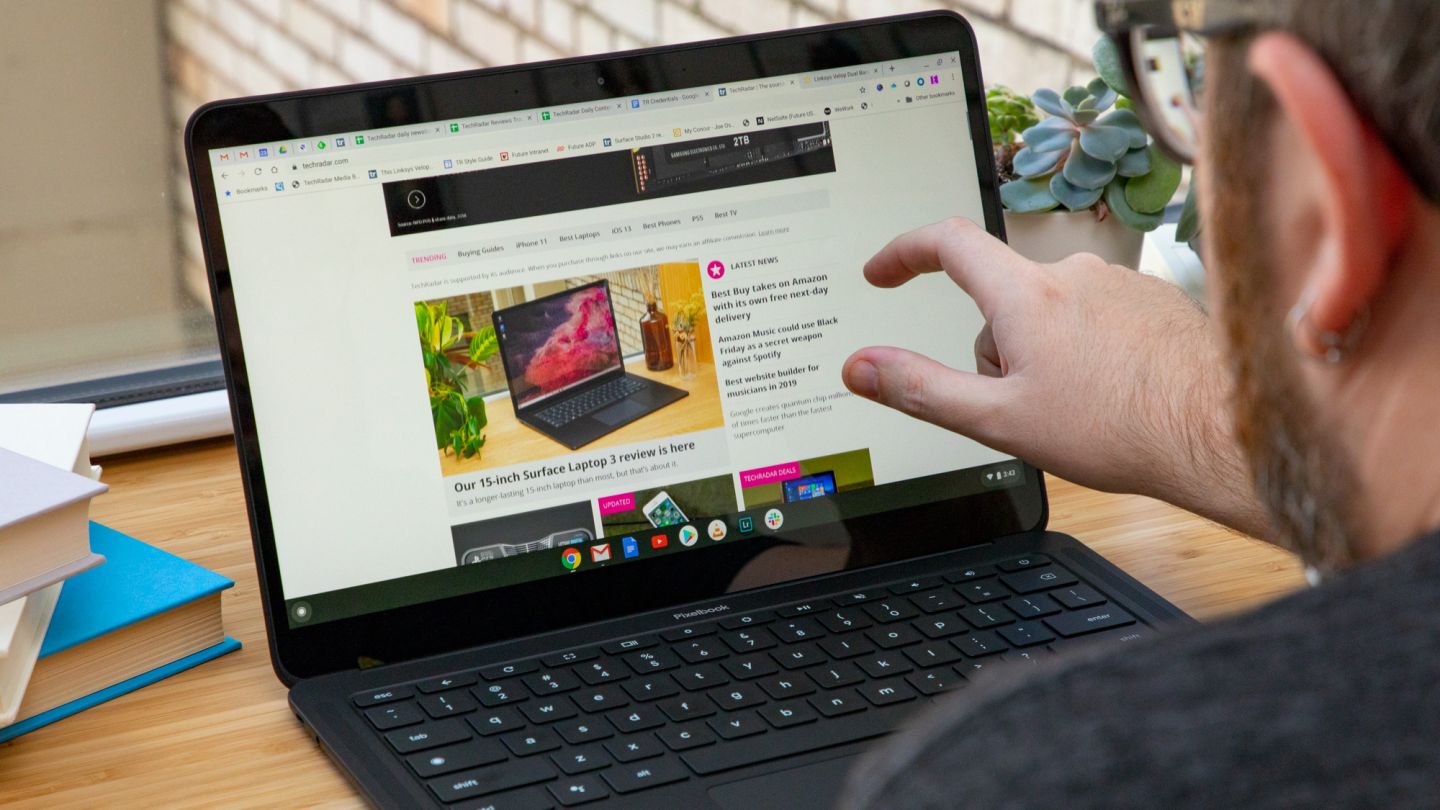 Of course, the Google Pixelbook Go is designed to be thin and light, measuring just 0.5 inches thick and weighing 2.3 pounds. The laptop comes in just two colors: “Just Black” and “Not Pink” – otherwise known as black and pink. We would appreciate something in between these two, such as a white or straight anodized magnesium option, but alas.

As we mentioned, this laptop’s frame is made from a magnesium alloy painted in a matte texture that, paired with the rippled base, is veritably easier to grip and hold while moving between meetings or work spaces, as Google promises. We find this frame to be very resistant to pressure and flex, which is rare in Chromebooks. And, boy, does Google make use of every last inch of that frame.

The Pixelbook Go not only sports a keyboard with comfortably spaced keys, but also top-firing speakers. Sure, they’re a bit small and, as a result, somewhat tinny in the high-end, but these speakers beat the vast majority of laptops of this size, normally found with bottom-firing speakers.

However, one thing that Google didn’t include is biometric log-in capability: there is no fingerprint sensor nor is there an iris or face scanner on the Pixelbook Go. Considering that many Chromebooks provide at least one of these solutions at this price point, it’s a sore spot for sure. Google tells us that it’s relying on its Android phone unlocking feature, but that leaves out anyone not using an Android phone.

But, back to positives, the Google Pixelbook Go keyboard is, without a doubt, one of the best we’ve ever used on a laptop. This is an improvement of Google’s “Hush” design, which brings the company’s original, silent Pixelbook keys to this more reasonable price point. We’d say that this is the best combination of silence and forceful feedback that we’ve ever experienced on a laptop keyboard.

However, you most likely wouldn’t know that the Pixelbook Go keyboard is backlit without reading this review. Pro tip: holding the “Alt” key and then pressing the screen brightness controls toggles the level of keyboard backlight brightness. It’s not a deal breaker, but this design is not that intuitive, to say the least, as this combination doesn’t do anything for any other key on the top function row.

When it comes to connectivity, the Pixelbook Go is equipped with two USB-C 3.1 ports that can handle both charging and display output, in addition to a 3.5mm headphone jack. This is by no means an expansive port selection, but it doesn’t really have to be. With that said, the laptop’s mid-range and high-end configurations are easily outmatched by Thunderbolt 3 ports aplenty when looking at their price-equivalent competition.

There is one disadvantage when comparing the Pixelbook Go frame design to its predecessor and competitors at similar prices: it’s not a 2-in-1 laptop. This certainly impacts the laptop’s versatility, but personally, this editor doesn’t care for convertible 2-in-1 laptops anyway. That makes us wonder why Google would include a touchscreen at all, but that would severely limit the amount of Android apps the operating system (OS) could support.

Now, let’s discuss what you’ll spend your entire time staring at: the display. Short of the highest-end configuration, the Pixelbook Go utilizes a 1080p touchscreen, which we find to display colors with the vibrancy and accuracy we expect from laptops within the high-end price range. However, we do wish that Chrome OS could render at native resolution without scaling – the most legible scaling produces an effective 1,600 x 900 resolution, cheapening the impact of its 1080p standing somewhat.

Still, we’d feel much more confident editing photos on this laptop screen than most other Chromebooks. As for the 4K Molecular Display option, while we haven’t experienced it in person, we find it to be completely unnecessary for a Chromebook.

Plus, above the screen, the Google Pixelbook Go features a 1080p front-facing camera that records video at 60 frames per second. Not even the 2019 MacBook Pro models come with this sharp of a webcam. Depending upon your connection, you’ll look much better than most other people in your video meetings using this laptop. 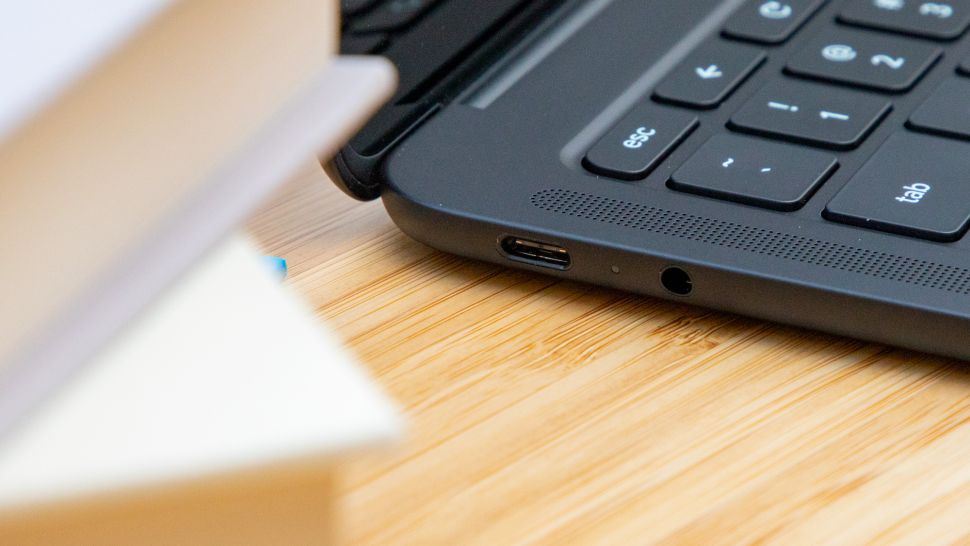 Being a Chromebook, you shouldn’t expect groundbreaking performance from the Pixelbook Go, particularly with fanless Intel CPUs inside. While we can’t speak for the entry-level model’s Intel Core m3 performance, we can say that the Core i5 Y-series is more than enough for basic tasks and even some light photo editing.

The laptop is certainly capable of running Android games and playing back 1080p video just fine, but anything beyond that will likely make the system chug. This works out well for Google, as its OS doesn’t really support many truly demanding applications.

We found that, with 8GB of RAM, this Chromebook is much more able to multi-task between a number of Google Chrome browser tabs – more than a dozen – without having to reload them upon accessing them due to memory shortages. Most Chromebooks at this price offer just 4GB of RAM to their detriment, as Google’s browser is awfully RAM dependent, even after updates.

Also, for its price, the Pixelbook Go’s Geekbench 4 numbers aren’t that much worse than the latest MacBook Air, at least with the configurations we’ve tested. That’s quite an impressive feat for a Chromebook – and, ironically, quite a feat for the MacBook Air.

In short, any task we need to perform to do our jobs here at TechRadar can be done on this Pixelbook Go without issue. That doesn’t speak for every user out there, but we do have a varied and intense workload spanning several browser tabs and Android apps at any given time. 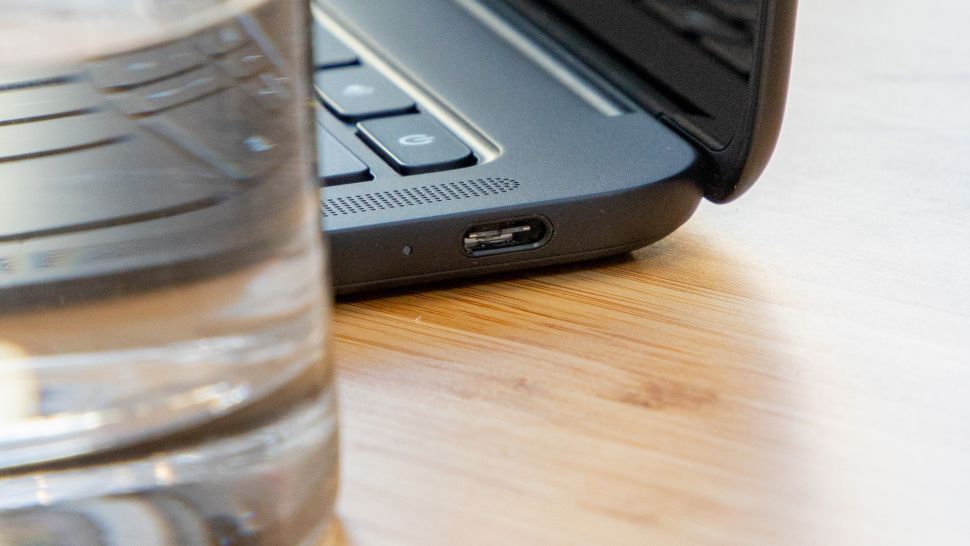 It’s even better that the Google Pixelbook Go has an extremely impressive battery life. It took a massive 11 hours and 14 minutes to run the Chromebook down via our local video playback test. The MacBook Air 2019 missed that mark by … an hour and 14 minutes.

This falls very closely in line with Google’s promised number – 12 hours on a charge – which is rare for almost every laptop on the market. The only other laptops to come that close to their advertised battery life figures are Apple’s, which is a testament to the benefits these companies enjoy from tuning their own hardware and software in tandem.

Plus, the Pixelbook Go can get up two hours of battery charge from just 20 minutes connected to the outlet. This makes the laptop nearly unkillable in terms of battery juice, a huge boon for folks that work from multiple places daily or take their work with them on their commute. 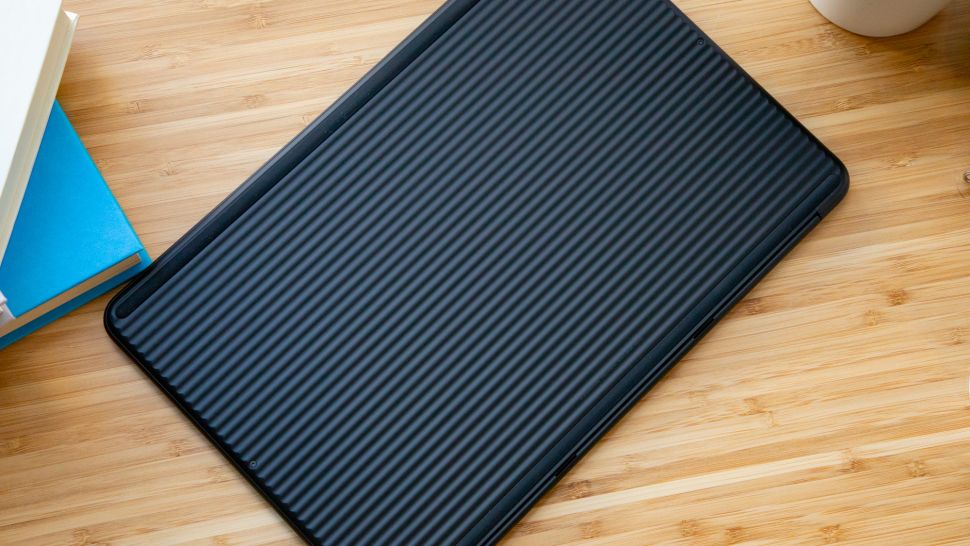 One huge benefit of Chromebooks is that they normally all come with squeaky-clean installs of Chrome OS, and naturally the Google Pixelbook Go is the cleanest of them all. However, this also means that this laptop doesn’t really offer anything truly unique in terms of software or features that isn’t already offered by other Chromebooks.

We do appreciate the inclusion of Google Assistant via voice or the keyboard, but again, this isn’t unique compared with almost every other modern Chromebook.

If there’s anything distinctive about this Chromebook in terms of features, we’d have to point again to its sharp, 1080p webcam. It’s a rarity on Chromebooks much less some of the most expensive laptops out there.

That said, we think that the Google Pixelbook Go should have some form of biometric login at this price, like most other laptops do – Chromebook or not. It’s not enough to assume users have an Android phone to log into their laptop with, especially in the US where iPhones are absolutely everywhere.

We’re ultimately happy to say that, in 2019, there is very little about Chrome OS that keeps it from parity with Windows 10 and macOS. Sure, it’s not a completely manipulable system like those are, but the vast majority of users can get just as much done here as they can on those traditional operating systems. 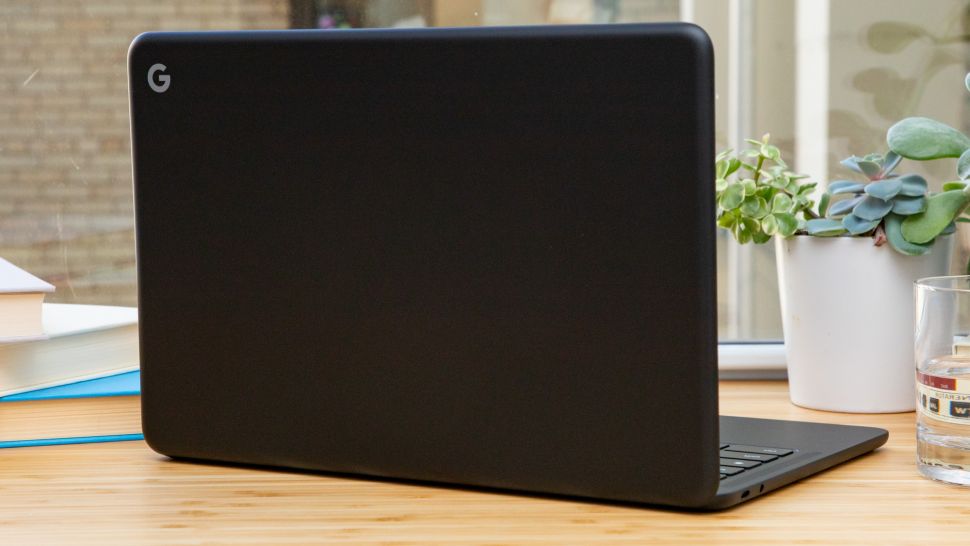