Gallery: The Moon is a tech museum 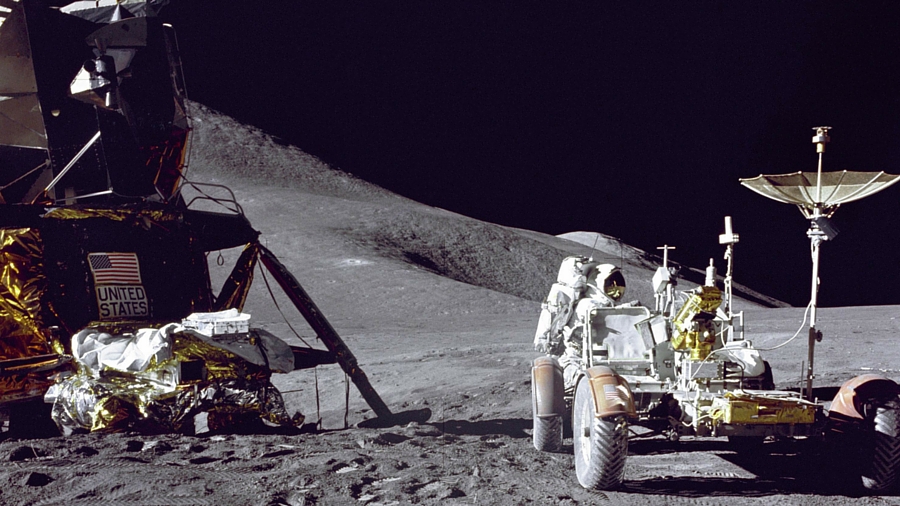 Late last year Nasa dumped 40,000 HD photos on Flickr taken by Apollo astronauts in the 1960s and 70s – but the Hasselblad cameras they used are mostly still on the surface, dumped in favour of bringing back Moon rocks.

Also left behind were Moon buggies, the remains of the Eagle landing module from 1969 – including Neil and Buzz’s beds – commemorative disks, and five retroreflectors that scientists still use to bounce lasers off the Moon. 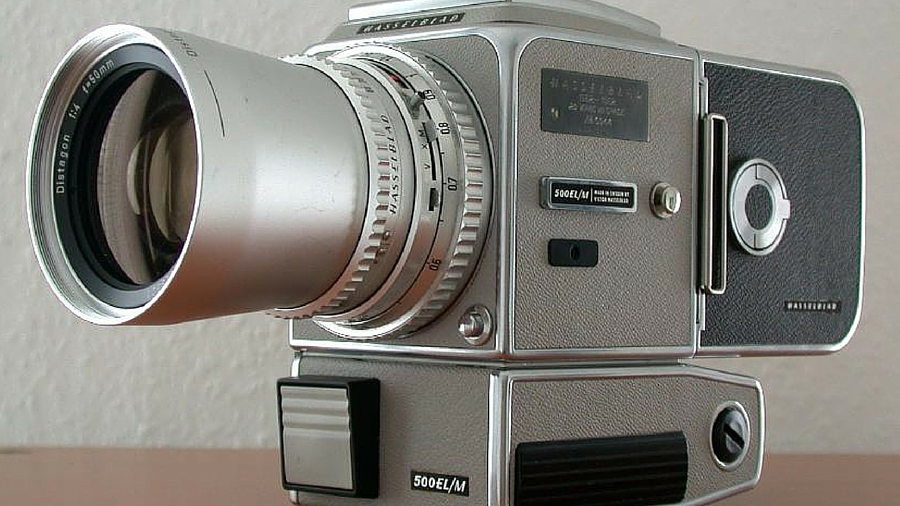 It’s known as ‘the Earthrise camera’ after taking THAT shot from Apollo 8 on Christmas Eve 1968, but there are a grand total of 12 Hasselblad 500EL cameras actually on the Moon’s surface. Probably the most famous work of the ‘Hassies’ are shots of Neil Armstrong on the Moon’s surface, although three of the Swedish-made cameras were used by the Apollo 11 crew, each fitted with a Zeiss Planar f/2.8 80mm lens.

Almost all the 500ELs were junked in favour of Moon rocks on the weight-conscious return journey, with only one making it back to Earth, on board Apollo 15. It was auctioned for US$910,000 in 2014. Victor Hasselblad stopped making them in 2008. 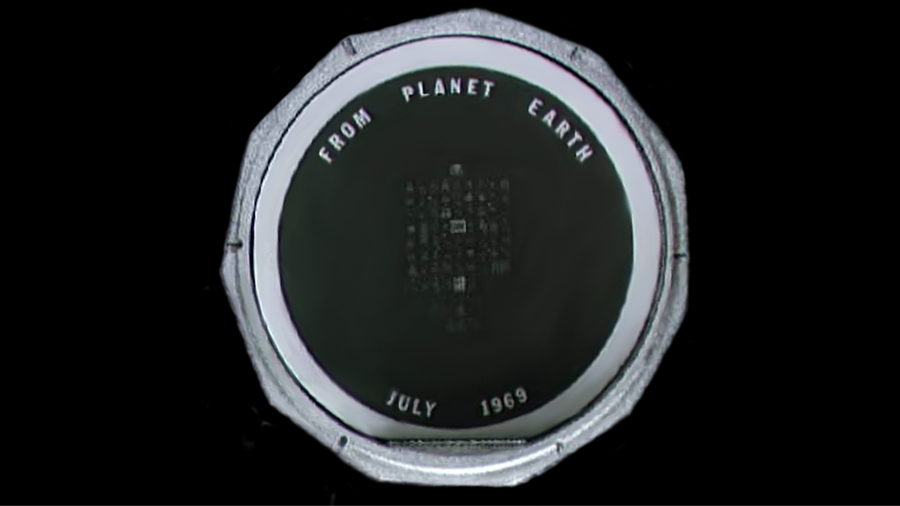 By Apollo 14 the astronauts were playing golf on the Moon, but since Apollo 11 was man’s lunar debut, it all got a bit sentimental. ‘From Planet Earth/July 1969’ reads the rim of the 1.5-inch silicon disk left by Armstrong and Aldrin, with ‘Goodwill messages from around the world brought to the Moon by the astronauts of Apollo 11’ also inscribed on the 50 cent coin-sized device.

The disk used (then) cutting-edge, ultra-thin microfiche technology; a piece of photographic film was printed with data, a technique used for data archiving. On it are mostly banal messages from politicians and monarchs from 73 countries in the world, as well as from the top brass at Nasa.

The ‘One Small Step’ TV camera 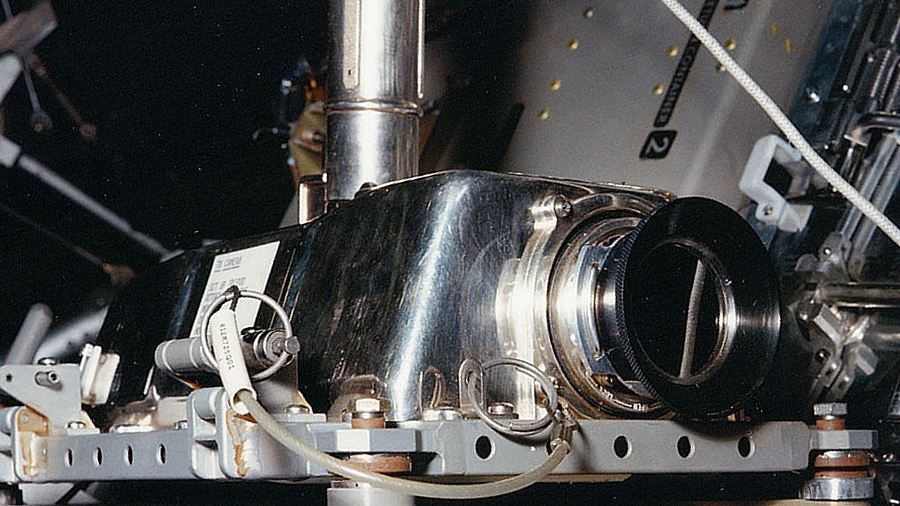 Apollo 11 beamed live video from the Moon back to an estimated audience of 530 million people on Earth, but what happened to the TV camera that filmed that iconic moment? The Apollo Lunar Television Camera was manufactured by Westinghouse, and shot in 320 lines at 10 frames per second, in black and white (a real shame – a colour version was available a few months later for Apollo 12 … although astronaut Alan Bean accidentally destroyed it).

The camera was attached to an arm on the leg of the Eagle landing module for the astronauts’ decent down the ladder during Apollo 11, then put on a tripod 21m from the Lunar Module to film the rest of man’s first-ever Moon-walk, on the Sea of Tranquility. Then they just left it there.

Colour TV cameras were left on all the Moon buggies to film the ascents of the ‪lunar modules during the ‬Apollo 15, Apollo 16 and Apollo 17 missions.

The Eagle has landed … forever 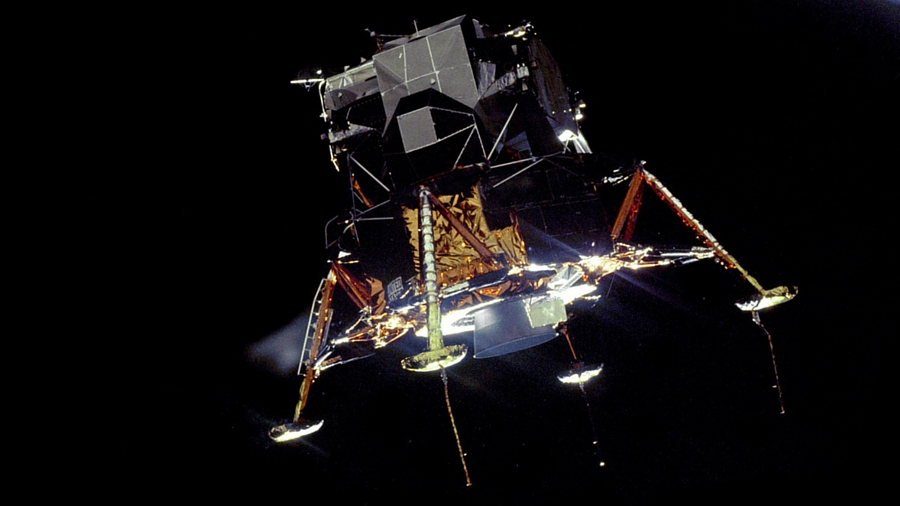 “Houston, Tranquility Base here. The Eagle has landed.” Sadly, most of humanity’s first Moon-lander is lost or destroyed. Although it took Neil and Buzz down to the lunar surface, and some of it took them back to Michael Collins in the orbiting Columbia module exactly 21 hours, 36 minutes later, Eagle is still on the Moon.

The 200kg LM-5 Eagle descent stage remains where it touched down in Tranquility Base, while the 2,200kg ascent stage was jettisoned back into lunar orbit after taking the astronauts back to Columbia. Eagle later crashed into the Moon, but its whereabouts are unknown. The same goes for all Apollo missions; the remains of Eagle, Snoopy, Intrepid, Antares, Falcon, Orion and Challenger will all surely be on the bucket lists of space tourists one day. 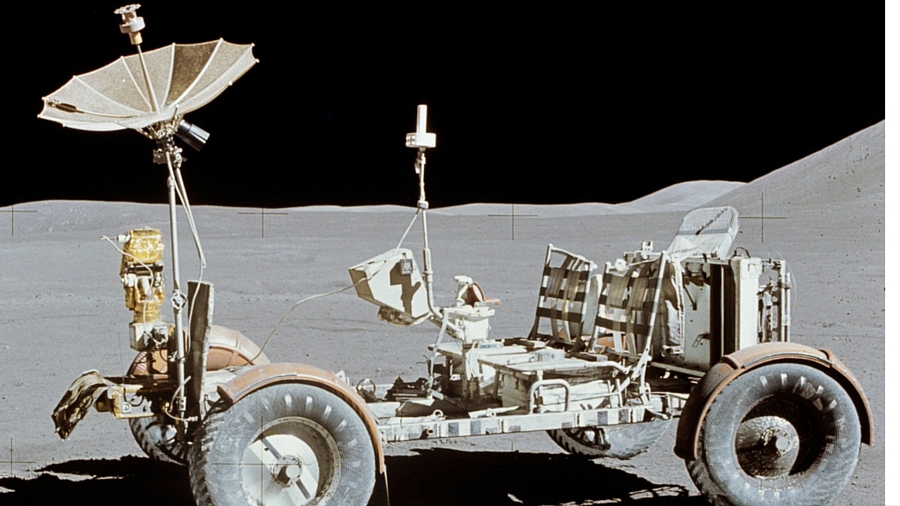 Self-driving cars … yeah, whatever. We used to have Moon buggies, better known as the Lunar Roving Vehicle (LRV). In July 1971, Apollo 15 astronauts David Scott and James Irwin were the first to be able to drive around the Moon’s Sea of Rains area, which they did for about 17.3 miles, and at a stately five to 10 miles per hour.

Also used on Apollo 16 and 17, there are three LRVs on the Moon … but there’s a fourth vehicle up there. The USSR’s Lunokhod 1 (literally Moon Walker 1) was the first vehicle on the Moon, arriving in November 1970 onboard Luna 17, where it also explored the same Sea of Rains, near the limb of the Moon, for 11 days, returning panoramic images and soil analysis. 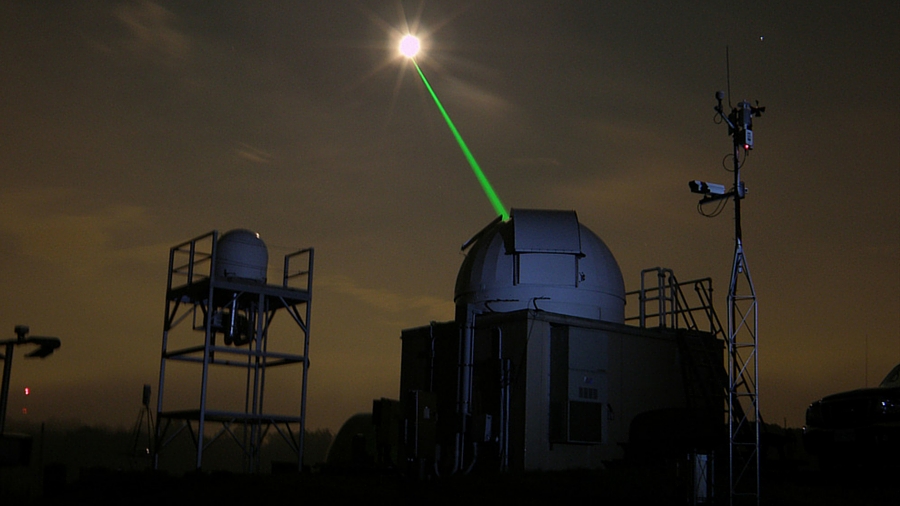 Probably the most useful things left on the Moon are five retroreflectors left by Apollo 11, 14 and 15 astronauts, and by the USSR’s Lunokhod 1 and 2 probes. Made famous in The Lunar Excitation episode of The Big Bang Theory, it’s possible to measure the exact distance to these retroreflectors from Earth down to the centimetre, precisely determining the exact orbit and orientation of the Moon (it wobbles, don’t you know), for testing Einstein’s theory of general relativity, and for finding your way around. Seriously, if you ever get lost on the Moon, it’s the LRRRs that you’ll need. Four of them are still working. 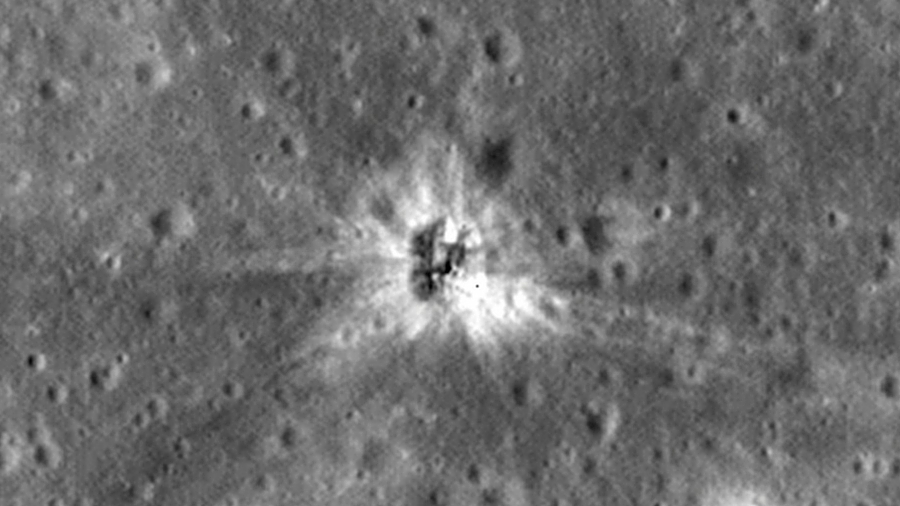 Despite mapping the Moon in far more detail than we know Earth’s ocean floors, Nasa’s Lunar Reconnaissance Orbiter hasn’t had much press since its 2009 launch. However, it managed to solve a mystery late in 2015 when it spotted the crash site of Apollo 16’s third-stage booster rocket.

These sections of the Saturn V launch rockets were deliberately smashed into the Moon after being used for take-off from Earth from (the almost-doomed) Apollo 13 onwards, but radio contact with the Apollo 16 booster was lost before the impact, so its location was unknown. It was finally discovered in the Sea of Islands. Such rocketry remains are responsible for a large chunk of the 187,400 kg of man-made material left on the Moon.

0 0 0
Previous ArticleIn Depth: Don't rage against the machine: humans, not robots, will cause the AI uprising
Next ArticleAmazon drops encryption on its tablets... but will bring it back
Comments (0)

Don't miss a deal at Ticketmaster UK
Best offers at Udemy
Discounts, Sales and Deals at Microsoft Store
Save your money with Farfetch
Online-Shopping with Turbo Tax
Best products at Ancestry
Latest Posts