Canon started the year off to a bang announcing its flagship EOS 1D X Mark II and now it has introduced the EOS 80D as an update to its midrange DSLR favorite EOS 70D.

The new DSLR brings with it a 24.2MP sensor, a nice bump up from the 20.2MP EOS 70D. More impressively, Canon has more than doubled the number cross type autofocus points from 19 to 45 – though it seems a pittance compared to the Sony A6300‘s 425-point hybrid AF system. 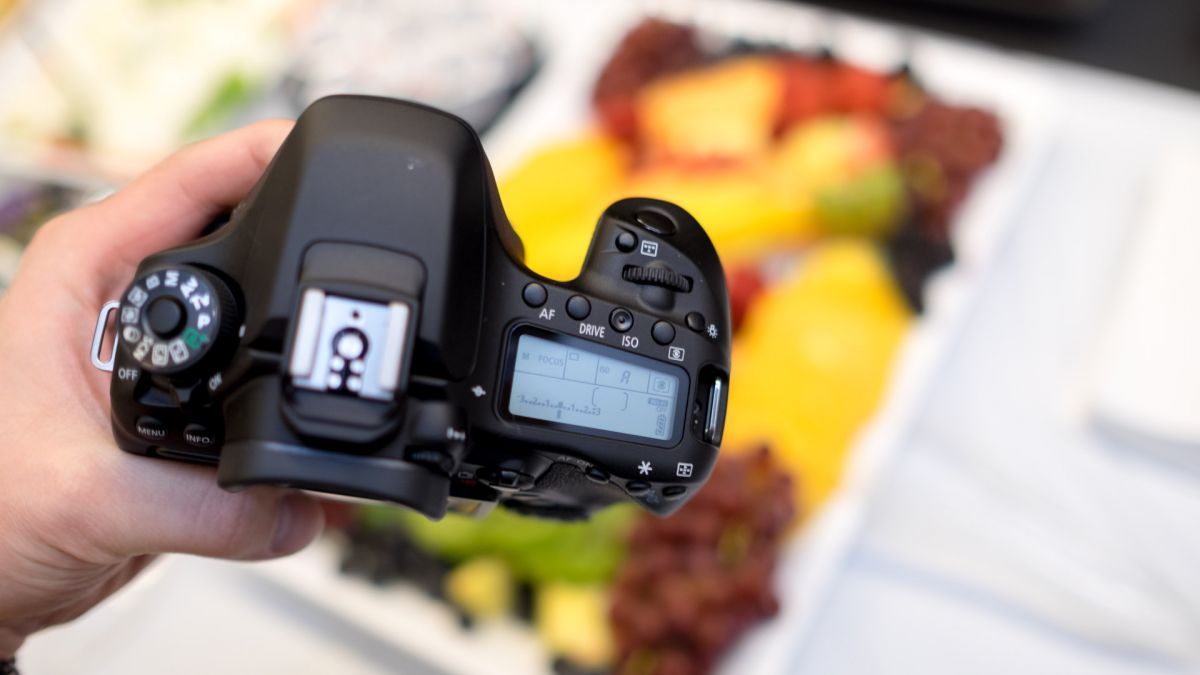 Numbers aside, Canon explained the EOS 80D’s autofocus system is more evenly spread throughout the frame allowing it to cover a wider area compared to the 70D. The camera’s autofocusing capabilities have also been further expanded to operate at light levels as low as -3 EV and compatibility with a maximum aperture of f8 at 27 of the AF points.

AF improvements aside, the 80D’s comes outfitted with a more powerful Digic 6 image processing engine, which allows it to capture 7 fps burst shots and 1080p video at 60 fps. Other new additions include built-in Wi-Fi and NFC, an improved 7560 RGB + infrared metering system and a broader ISO range of 100-16000 (expandable to 51,200). 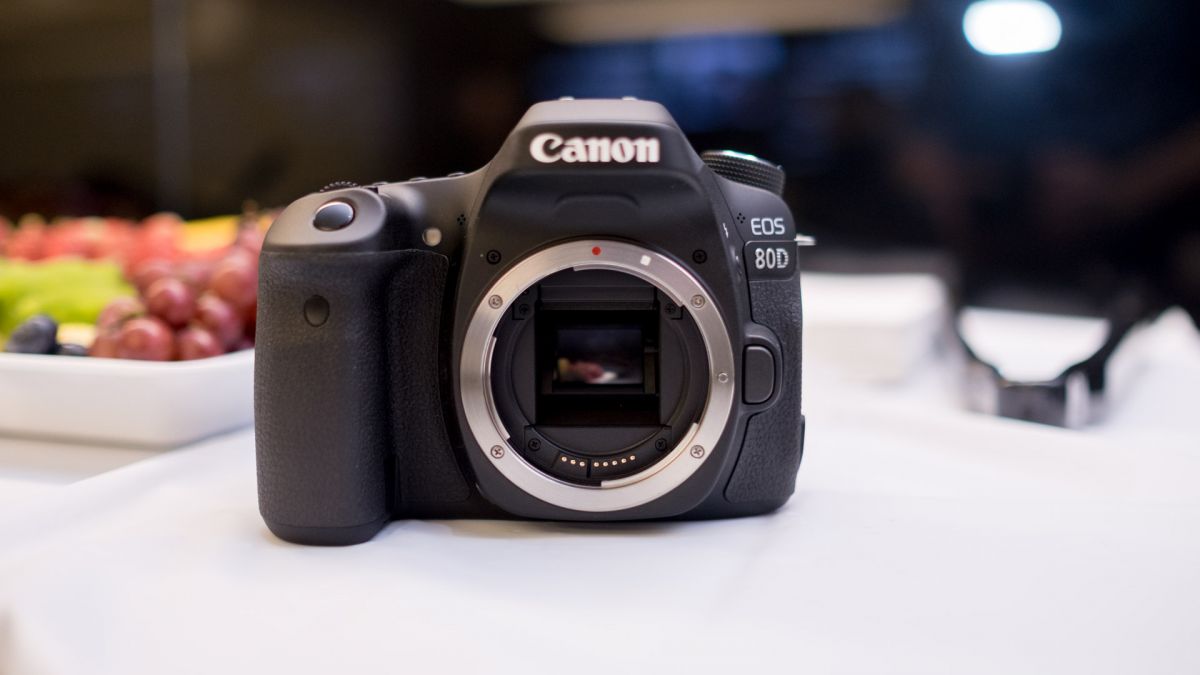 Like the Canon EOS 5DS, the 80D also features a vibration control system to dampen the sound and force of the moving parts inside the camera’s mirror box.

Sadly, 4K was left out of the new features, but videographers will appreciate the added headphone jack and broadened ISO range for movies up to 12800 (expandable to 25600). Canon’s patented Dual Pixel AF system now works faster, smoother and with all Canon EF lenses.

Although the EOS 80D comes without any blockbuster improvements, Canon has added new features and improved upon existing ones in almost every category. Perhaps some of the camera’s best capabilities don’t come from within the camera, rather Canon’s new video-focused lens and accessories. 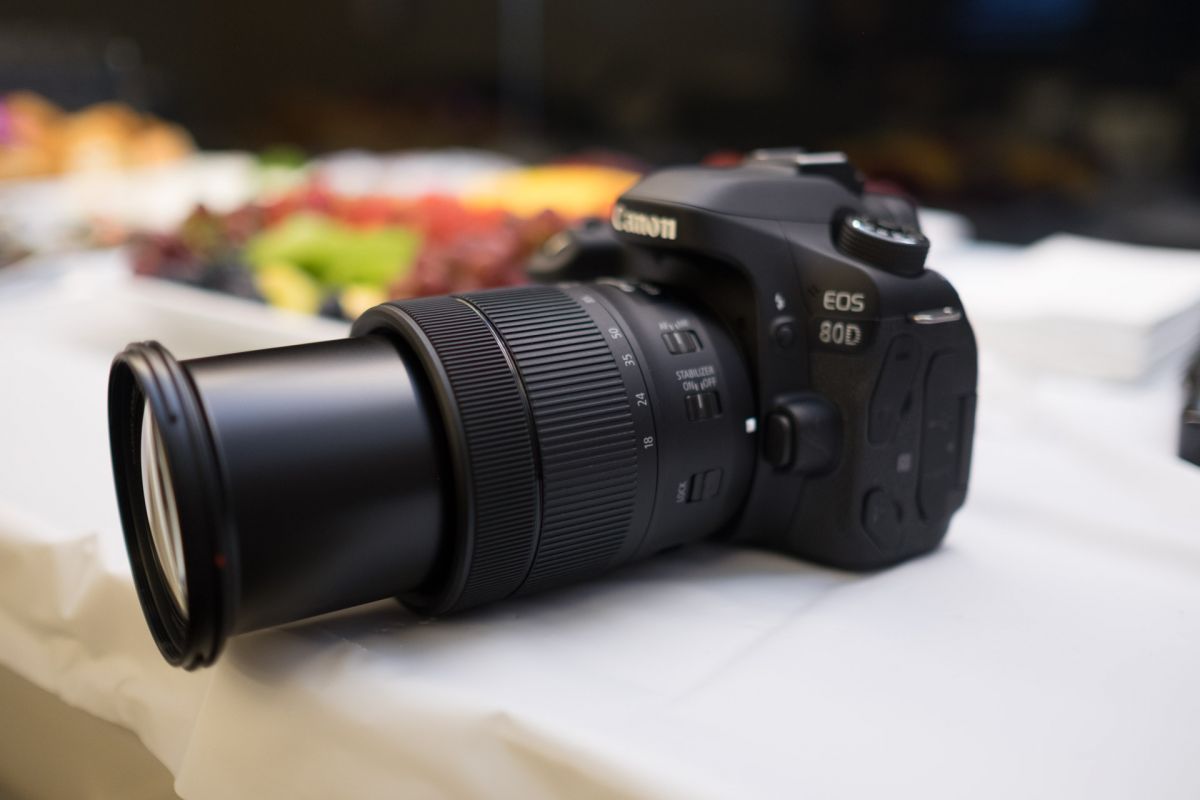 On top of announcing a new mid-range camera, Canon also introduced a super-zoom lens to go with it. The Canon EF-S 18-135mm f3.5-5.6 IS USM is not only an update to the existing lens, it’s also the first to feature a new Nano Ultra-Sonic Motor focusing system for truly silent and quick focusing.

Essentially, the new optic is built with a flat motor that’s shaped more like a plate rather than the cylindrical gear assemblies found in most lenses. Canon claims its new Nano USM system is much faster compared to the older STM lens; going up to 2.5x faster on the wide end (18mm) and 4.3x faster when fully extended to its 135mm focal length. 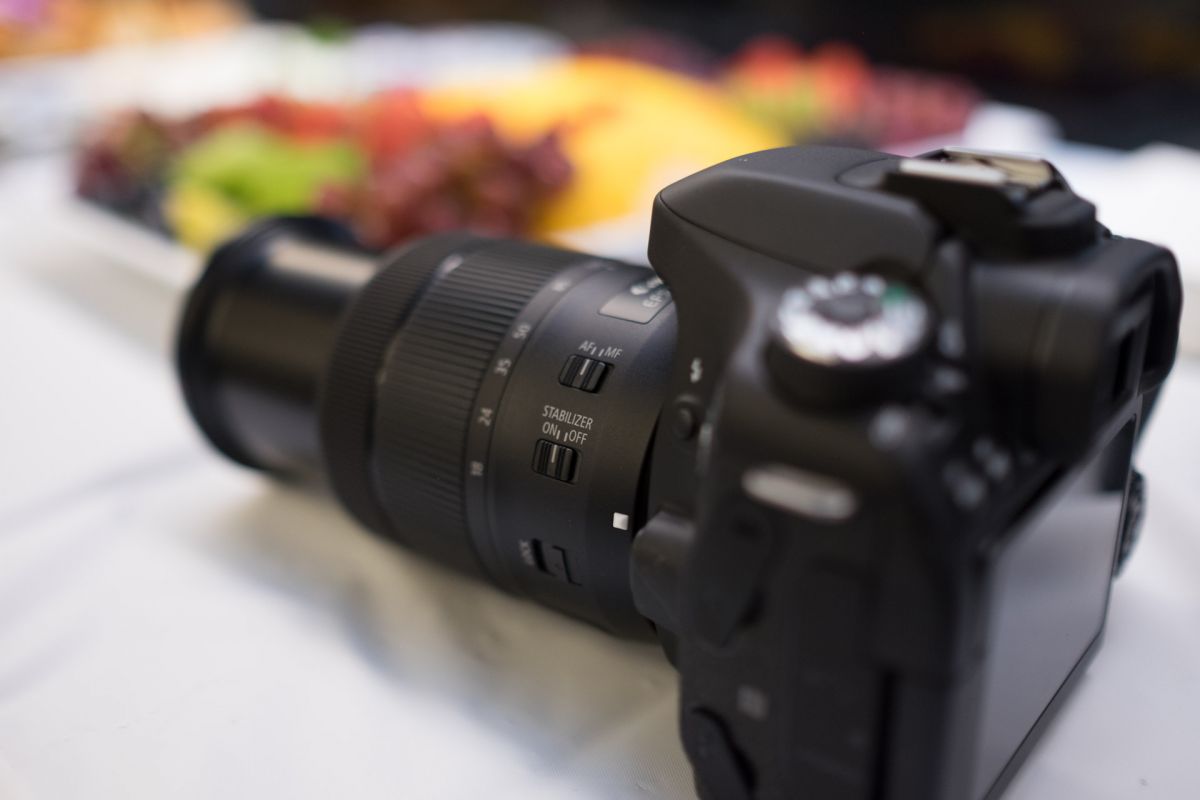 The underlying glass in the lens has also been refined as has the image stabilization system, which should provide up to 4-stops of shake reduction. 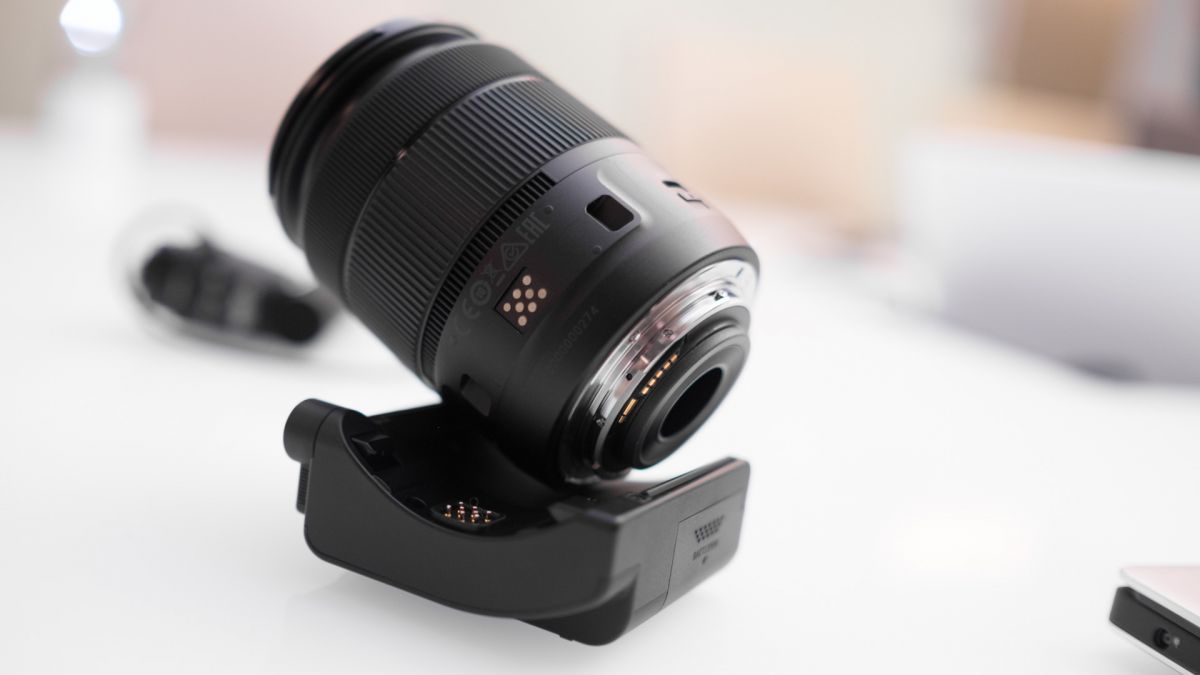 First up, there’s a power zoom adapter called the PZ-E1. It’s roughly the size of a small lavalier microphone pack, and users can attach the new accessory to the bottom of the new 18-135mm Nano USM lens – this it’s the only optic that works with it. As the name suggests, the power zoom adapter lets you electronically zoom Canon’s new EF-S zoom lenses with a simple lever.

Videographers can also fine tune how quickly their lenses zoom in by picking between two modes; slow mode will limit the motion to 9.5 to 14 seconds, but the accessory can also change focal lengths as fast as 2.4 seconds when in its fast mode. 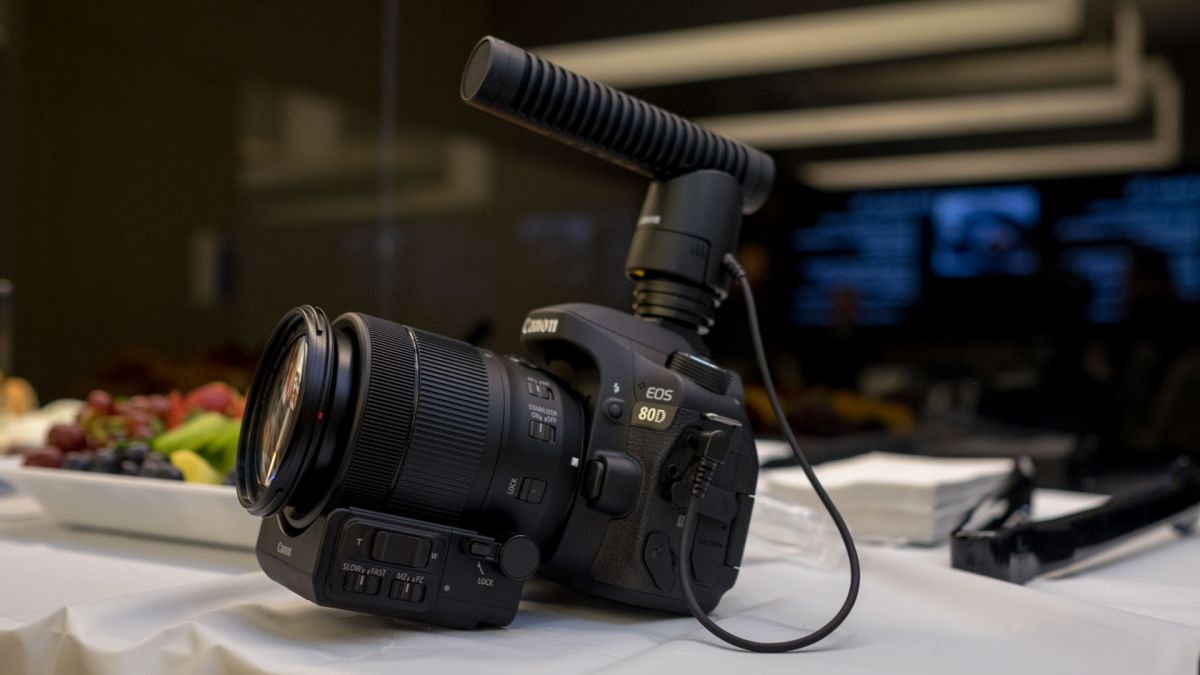 Canon’s other new video accessory is a directional stereo microphone that looks and works much in the same way as the industry favorite Rode’s shotgun microphones. One of the directional microphone’s neat features is its ability to pivot between 90 and 120 degrees. The DM-E1 is also fitted with a durable shock mount to reduce the amount of sound picked up from the camera’s operation and lens motors.

Don't miss a deal at Udemy
Best offers at Ancestry
Discounts, Sales and Deals at The Home Depot
Save your money with H&R Block
Online-Shopping with Vimeo
Best products at O2 Mobile
Latest Posts