After almost three decades in the audio wilderness, Braun is back with a trio of smart wireless speakers: the LE01, LE02 and LE03. The company produced numerous groundbreaking audio products during the second half of the 20th century and this new range is inspired by one of its most iconic creations, the Braun LE1.

However, it’s not simply a case of the brand resuming production after a long hiatus. The new speakers bear the Braun name but are, in fact, made by British manufacturer Pure Audio following a licensing deal struck with Braun’s parent company, Procter & Gamble, last year.

Pure’s audio expertise is evident in how the LE03 sounds and the technology on show is a world away from the LE1, which was released way back in 1959. It’s a modern take on a classic design and, for the most part, a successful one.

Braun LE03 review: What do you get for the money?

The LE03 may be the smallest entry in the LE range but it’s far from cheap at £349. In the box you get the speaker along with two power cables: one with a two-pronged connector and the other with your standard three-pin connection. There are no other accessories included, although Braun does sell a floor stand separately for £169.

The majority of the features you’d expect from a modern wireless speaker are present and correct. When connected to a WiFi network, you can take advantage of built-in Google Assistant and Chromecast functionality and there’s also support for Apple AirPlay 2. Bluetooth connectivity is also available and a 3.5mm AUX-in jack provides the option to hook up another audio device directly to the speaker.

Audio output is strictly mono, although it’s possible to pair two LE03s together to create a stereo soundscape if you’re willing to shell out just short of £700. Alternatively, you can pick up one of the larger LE speakers, both of which do deliver stereo audio. The LE02 will set you back £749, while the LE01 will cost you a whopping £1,099.

Having recently reviewed the beautiful Roberts Beacon 330, my expectations of what an attractive speaker should look like have been raised somewhat, but the LE03 has its own aesthetic appeal.

The minimalist design borrows heavily from Dieter Rams’ original LE1 and the white enclosure of the model I was sent creates a point of difference with the black acoustic cloth covering the grille. While it may not scream personality, the look lends itself well to any environment and, while a little chunky at 170 x 170 x 84mm (WHD), it’ll fit neatly onto most bookshelves and desks.

Wireless connectivity comes in the form of dual-band 802.11ac WiFi and makes use of built-in Chromecast and Apple AirPlay 2 tech, both of which allow you to easily stream content from a huge range of sources. There’s also support for Bluetooth 4.2 if you’d rather connect that way.

Alongside its streaming capabilities, the LE03 has Google Assistant baked-in and voice controls work very effectively. The dual-microphone array picked up my voice accurately and consistently, even with music playing at higher volumes. And for those times when you’d rather Google Assistant wasn’t listening in, there’s a privacy button for disengaging the microphones. You can clearly see when you’re in privacy mode, as both the mic button and four LEDs housed in the top-right corner of the speaker grille are illuminated orange.

The ability to easily see whether Google is listening is welcome and, if you’d rather forgo voice commands, you can use your phone to cast music to the speaker and the physical buttons located on top of the speaker to control things. There are dedicated play/pause and Bluetooth pairing buttons, an “action” button that engages the microphone without using the “Hey Google” or “OK Google” wake words and discrete volume up/volume down buttons. 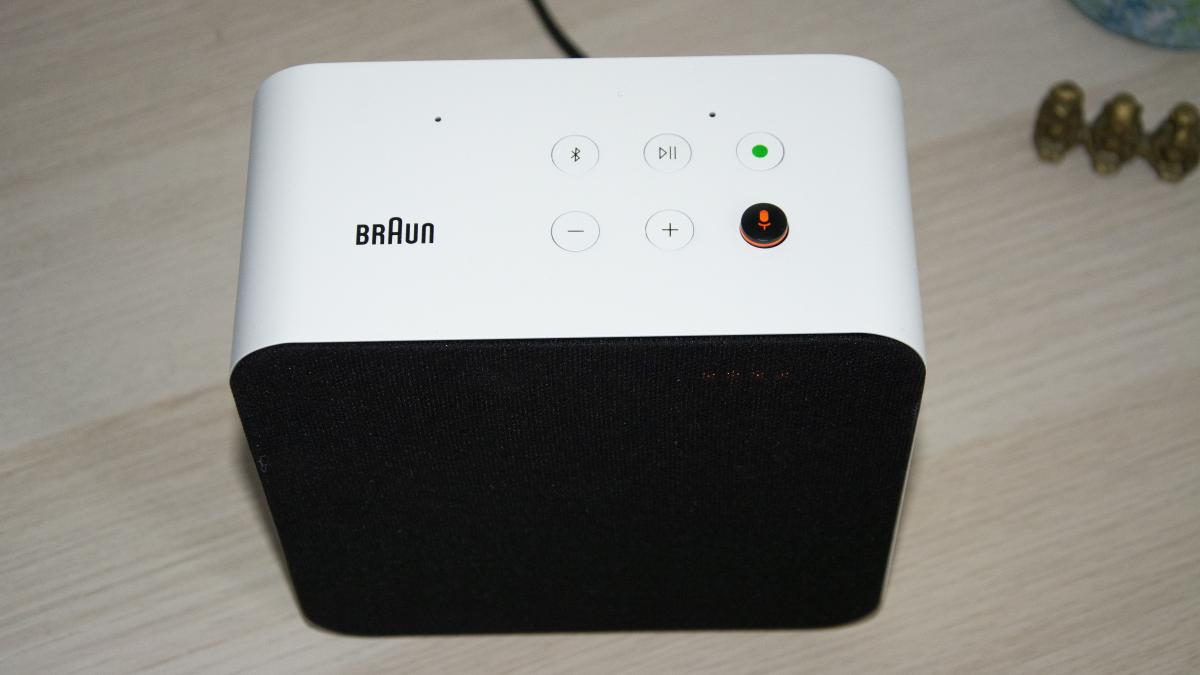 Braun LE03 review: How does it sound?

Pure’s reputation for creating great-sounding DAB radios precedes it and that audio quality has transferred well to the LE03. The speaker houses a custom-designed 3.5in woofer, full-range 1.5in radiator drive unit and a 5 x 3in customised passive radiator, and the combination creates a very enjoyable sound profile.

There’s ample detail in the mid and upper registers and no shortage of punch to low-end frequencies. Vocals on The Goo Goo Dolls’ “Dizzy” sounded crisp and instrument separation was impressive, while Bad Company UK’s thumping Drum & Bass track “The Nine” demonstrated the speaker’s ability to ably handle weighty basslines.

Although Braun has not revealed an output rating for the LE03, it’s a speaker with plenty of muscle. It filled my reasonably sized office at around half volume and as you near the upper end of its volume range, things move into flat-filling, disturbing the neighbours territory. However, when you really ramp up the volume, the speaker’s sound quality takes a hit, with audio occasionally sounding a little distorted.

Audio can be tweaked via the Braun Audio app, but customisation options are limited to bass and treble sliders on a ten-point scale from -5 to +5. I found the default settings catered perfectly well to most genres of music that I listened to during testing but a little bit of extra customisation is always welcome.

You can also alter your sonic experience slightly using what Braun describes as the speaker’s “placement profile” within the companion app. The profile options available vary according to whether the speaker is attached to a floor stand or wall bracket, or stood on its silicone feet. 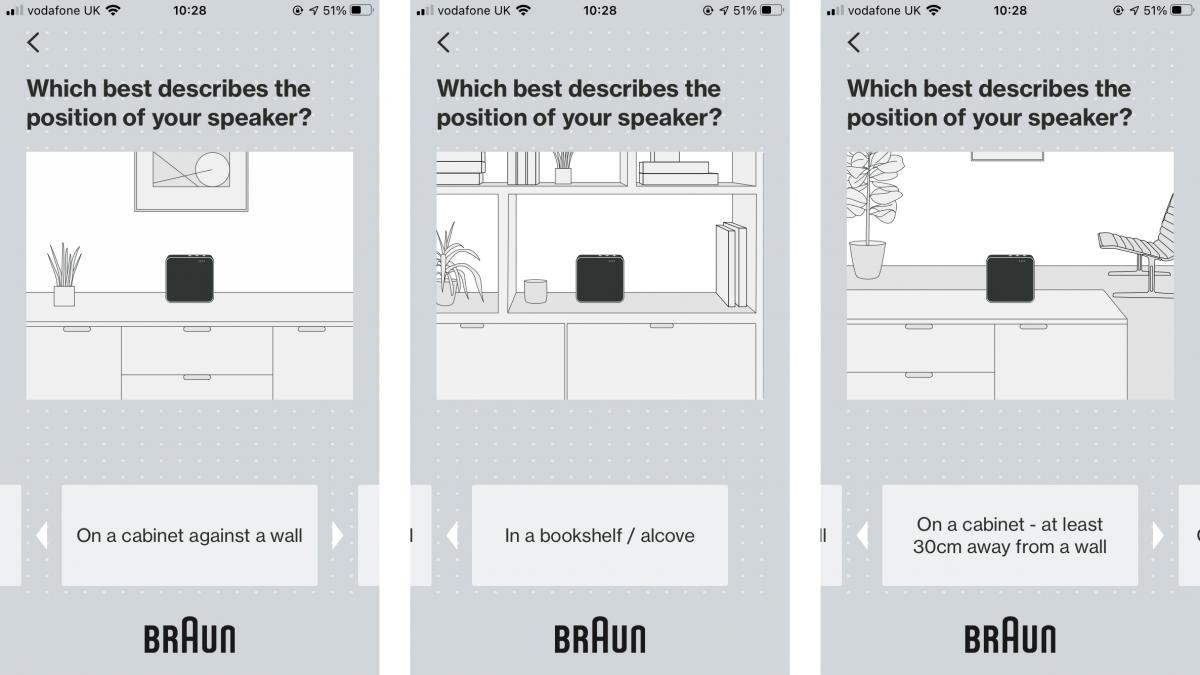 When stood on its feet, there are five positions to choose from: “in a corner”, “on a cabinet against a wall”, “on a cabinet at least 30cm away from a wall”, “on the floor against a wall” and “in a bookshelf/alcove”. Audio quality remained consistent while testing the speaker in a variety of positions around my flat, so I’d consider the various profiles a success. However, unlike the Sonos Move’s automatic EQ-adjusting Auto Trueplay technology, you have to manually change the profile via the app, making it a little less user friendly.

Braun LE03 review: What could it do better?

As previously mentioned, pushing the Braun LE03 to its limits sees sound quality suffer. That’s not to say your music suddenly sounds terrible but audio feels less composed and I experienced distortion on particularly powerful tracks. It’s only a problem at really high volumes, though, so wasn’t something I experienced very often

Compared with something like the Bluesound Pulse Flex 2i, the LE03 is a little light on connection options. There’s no USB port so you can’t play audio files stored on a memory stick and the lack of an Ethernet port means you’re unable to hook it up directly to your router. The options available will satisfy most people and cover the most important bases, but additional alternatives would have been appreciated.

The physical controls, while perfectly serviceable, lack track skipping and aren’t illuminated. These are ultimately small nitpicks though and, given you’ll be using either your voice or phone to control the speaker most of the time, don’t have a significant impact.

Braun LE03 review: Should you buy it?

The LE03 represents a very solid return to the world of audio for Braun. Sound quality is impressive as long as you’re not listening at ear-shattering volume, Google Assistant is integrated extremely well and in-built Chromecast and AirPlay 2 mean you’re covered when it comes to streaming. I’m a big fan of the retro-inspired design, too, and would take the LE03 over the smart speaker offerings from Google or Amazon.

However, if you can stretch your budget an extra £50 and have the space for its larger frame, the Sonos Move remains the mid-range wireless speaker to beat thanks to its comprehensive app, portability and water resistance.

Don't miss a deal at Currys
Best offers at Bodybuilding
Discounts, Sales and Deals at Ancestry
Save your money with Argos
Online-Shopping with Sky
Best products at Virgin Media
Latest Posts