Top-quality Bluetooth audio, but you pay through the nose for it

The Bose SoundLink Revolve is Bose’s latest wireless speaker, but it isn’t a trendsetter, it’s a follower. It doesn’t do anything particularly clever. It isn’t a digital voice assistant and can’t do the shopping for you. It’s a Bluetooth speaker, no more, no less.

That’s not such a bad thing, though, especially when it’s a speaker this good. The SoundLink Revolve has been built with the same care and attention to detail that made the Bose SoundLink Mini 2 one of our favourite Bluetooth speakers back in 2015, and it sounds wonderful, too. More on that a little later on, though.

Bose SoundLink Revolve review: What you need to know

It doesn’t have Wi-Fi so you can’t Google Cast to it or use it in a multiroom setup. It doesn’t have voice-assistant features like the Amazon Echo, the Google Home or the forthcoming Apple HomePod, and it’s quite pricey at £200.

It does have a handful of nifty tricks, though. It projects audio around itself in 360 degrees, it’s water-resistant to the IPX4 standard and, as long as you keep it in connected with your phone, you can pretend it’s a Google Home or Apple HomePod by holding down the multi-function button moulded into the top and speaking to your phone via the built-in microphone. 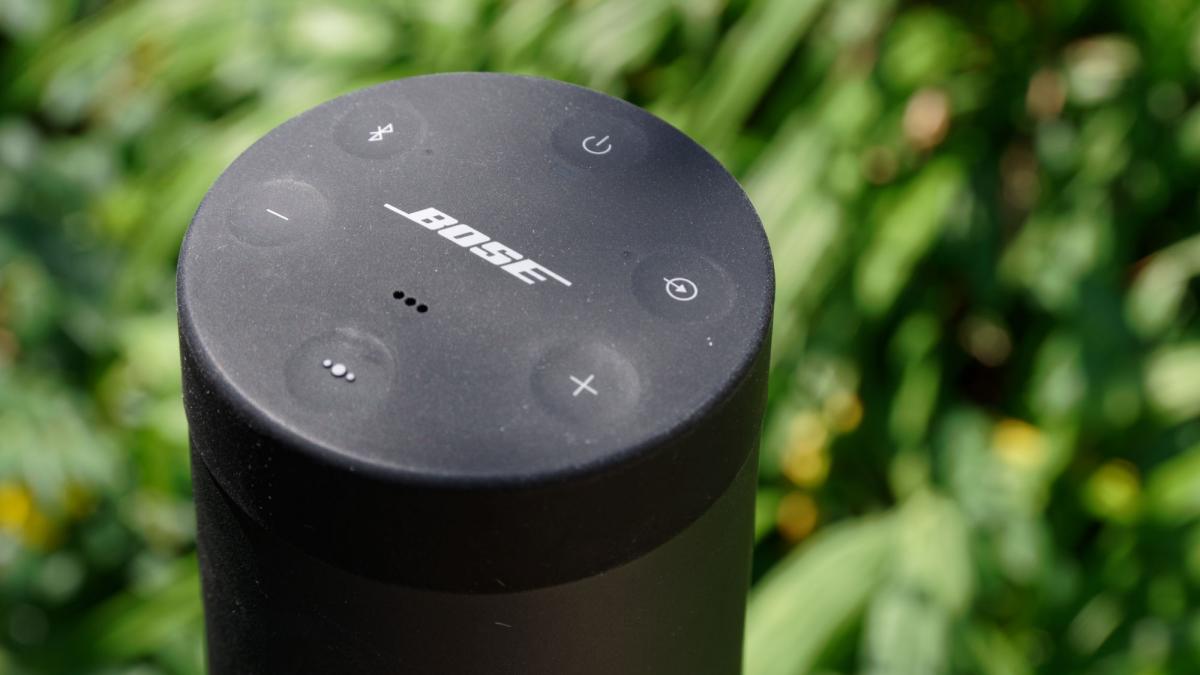 At £200, the Bose SoundLink Revolve is on the pricey side for a compact speaker. It’s £50 more expensive than the Bose SoundLink Mini 2, another excellent Bose Bluetooth speaker, although that lacks the Revolve’s 360-degree audio and water-resistance.

If you want a waterproof speaker, there are better-value options, too. Our choice at the moment is the UE Wonderboom, which costs £90, sounds great, looks great and floats in water.

For those willing to spend the extra cash, though, there’s a touch of extra class to the Bose SoundLink revolve. It’s reasonably compact and lightweight, measuring 152mm tall and 82mm across the base, and it tips the scales at 660g.

It’s available in two different colours – charcoal grey and black or silver and white – and both are understated and smart. A perforated grille wraps around the bottom half of the speaker’s aluminium chassis and rubber is moulded around the base and the top. 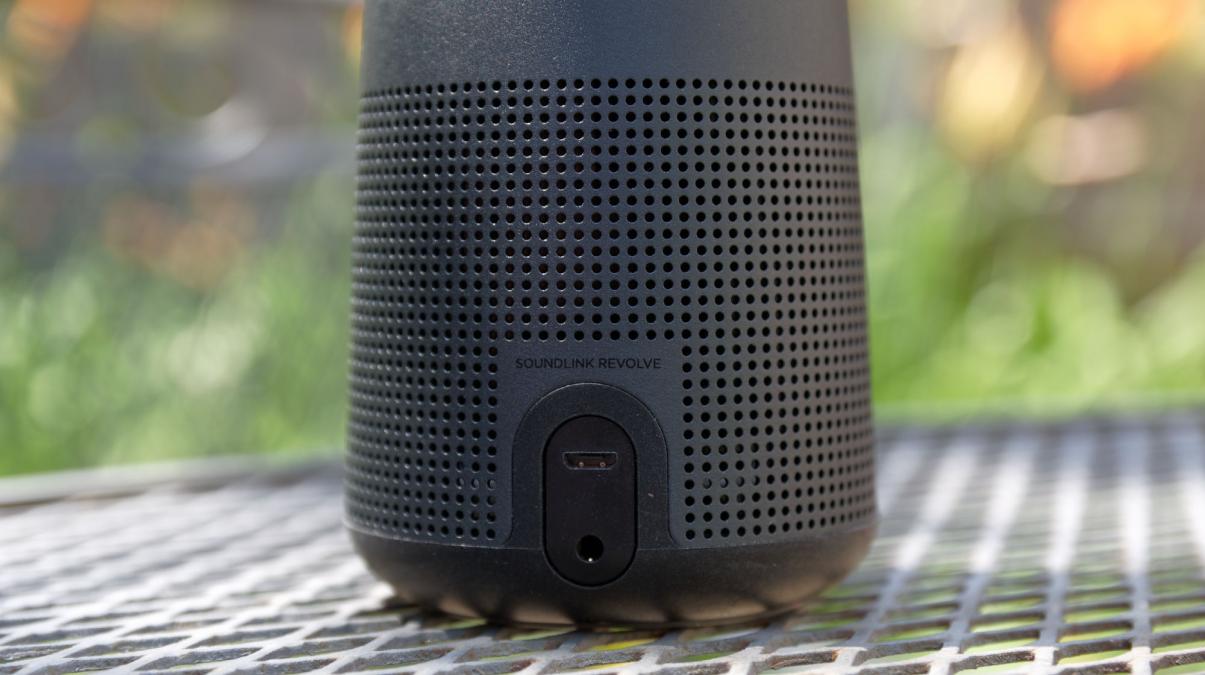 The speaker’s controls are set into to the top cap, and make the speaker a doddle to use. There are separate buttons for adjusting the volume, dedicated buttons for switching between aux/USB and Bluetooth audio sources, and a “multi-function” button that can be used to pause and play (single press) or skip back and forth (triple- and double-press). You can also hold it down to activate either Google Assistant or Siri, depending on the smartphone you have connected

The speaker is IPX4 water-resistant, so you can use it in a rain shower, but not submerge it like the UE Wonderboom. You can also hook up legacy hardware via a 3.5mm cable.

There’s a 1.4in thread fitted to the base so you can mount the Revolve on a camera tripod, and it charges via either micro-USB or the optional £25 charging base. Battery life is quoted at 12 hours of playback at moderate volume levels, which is about standard for a speaker of this size.

The Bose SoundLink Revolve doesn’t support aptX, but that doesn’t prove to be a particular problem. General sound quality is simply stunning for a speaker of this size and the 360-degree audio works perfectly well. Stick the speaker in the centre of a room and, no matter where you stand or sit, the music sounds the same.

Inside is a single, full-range driver that fires downwards onto a dispersal plate and a pair of passive radiators facing in opposite direction to create the 360-degree audio effect. Bose’s engineers have also introduced a new technology here: a “pressure trap” to reduce distortion.

I compared it side by side with the wondrous Kef Muo and, while it doesn’t sound quite as balanced or as beautifully rich in the mid-band or as sweet at the top end as that speaker, all-round audio quality is still wonderful. The bass is surprisingly full and rounded, clarity at the top-end is decent and there’s enough volume to fill a medium-sized room. 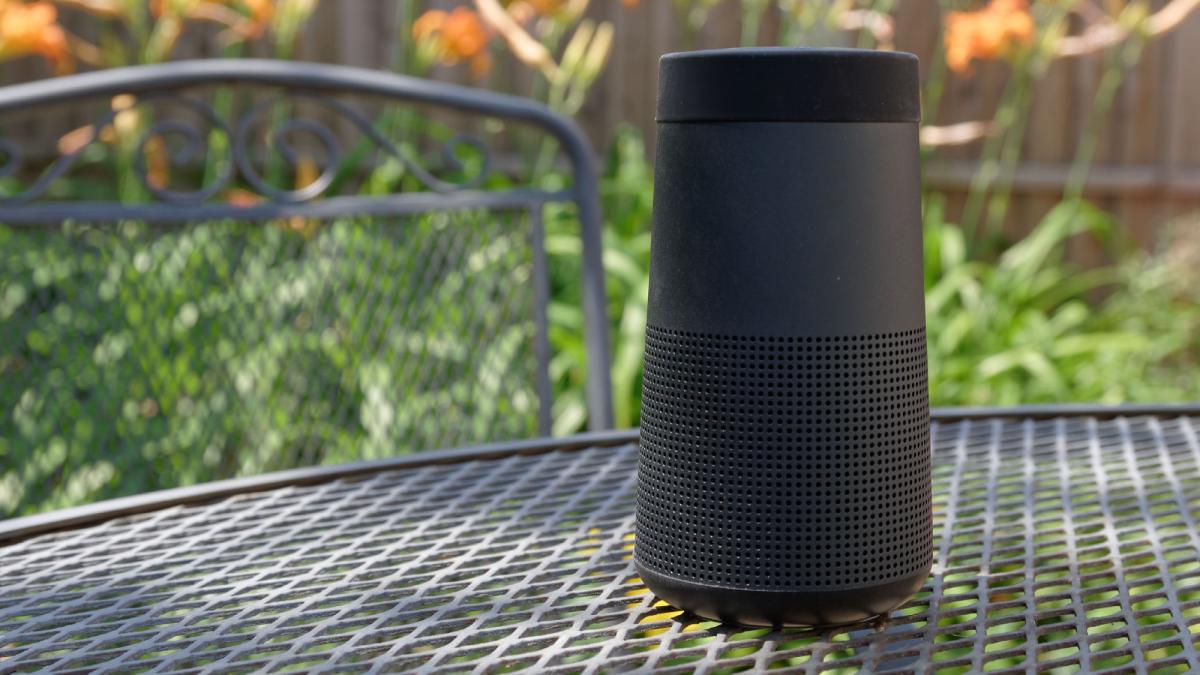 The Revolve’s party trick is that it makes use of Bose’s volume-adaptive EQ algorithm, ramping up the bass at low volume and rolling it off as you turn up the wick. Generally, this works well. Some tracks, such as Trentemoeller’s “Moan”, can sound a little muffled and overly warm as a result. The flipside, however, is that, at lower volumes, vocals sound wonderfully lustrous and enveloping and there’s enough body that you don’t need to turn the volume up anyway. It’s the perfect speaker for background listening.

I do have one criticism and it is that, although the speaker does go loud, at top volume things get a little boomy and resonant, with even with simple tracks such as Melody Gardot’s “My One and Only Thrill”. The Kef Muo maintains a much more civilised and controlled performance throughout the volume range.

Still, the Kef is currently £50 more expensive, it isn’t water-resistant and it doesn’t do 360-degree audio either. That means that, even at £200, the Bose SoundLink Revolve is a decent option for anyone looking for good sound quality in a compact package.

Don't miss a deal at Vodafone UK
Best offers at Myprotein
Discounts, Sales and Deals at Argos
Save your money with Farfetch
Online-Shopping with FNAC
Best products at Udemy
Latest Posts