Ah, flaky broadband. The bane of first world existence. But, actually, a real pain in the backside when you’re in the middle of a Skype call and it drops dead. Or you’re streaming Game of Thrones and someone shuts the door (rather than, ahem, holds it) resulting in a limited Wi-Fi connection and an image so low-res it’s like being back in the dark ages.

Which is where Boosty could be a godsend. This mini router – awkwardly named as it is; a quick Google search and you’re likely to find a whole list of other pain-in-the-backside items – is designed to connect to your main home router and top-up and/or smooth-out the connection courtesy of SIM-based mobile connection.

So you’ll need a device such as your smartphone with an active SIM and available data to hand, plus the acceptance of bearing the brunt of any potential additional costs. Cleverly, however, it bypasses tethering, so you won’t suffer auto-capping imposed by many networks.

We’ve been tinkering with Boosty at home – it’s not designed for business networks – to see whether it’s worthy of its £69 first year buy-in and £39 subsequent annual fee.

Boosty comes in a dinky box, which is apt as this mini router measures a mere 43mm square and 13mm tall. It’s a tiny little thing, which includes a tiny Ethernet and USB cable to connect to your main router. 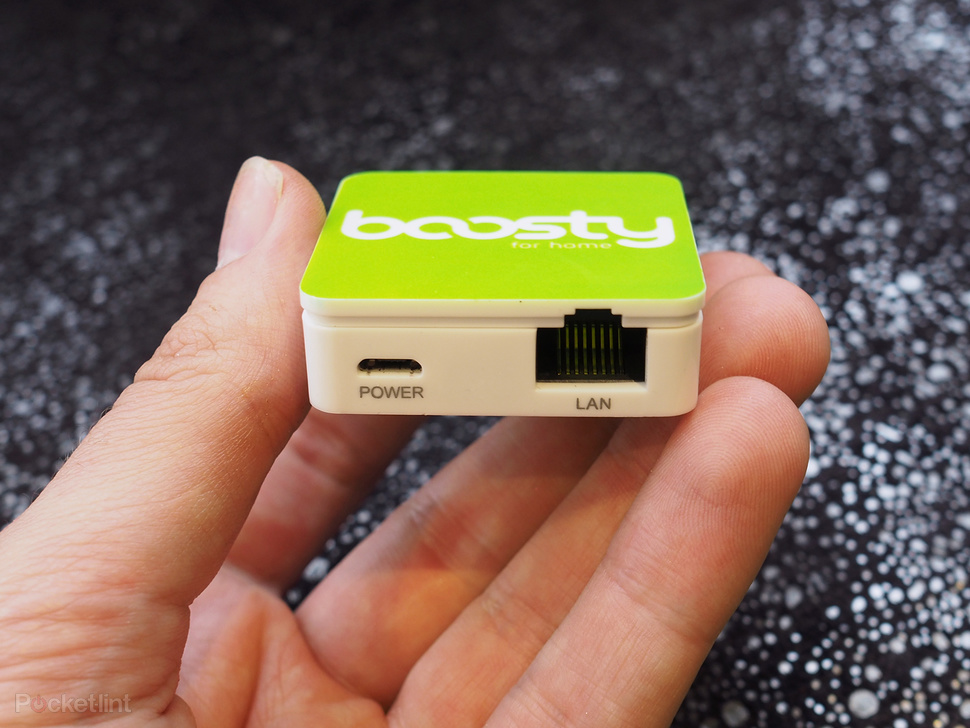 Which is where we encounter our first issue: the Virgin Media Super Hub we run at home, like so many other routers, doesn’t have any USB ports. Luckily we had a spare plug with a USB socket in, but the provided USB cable in the box is so darn short that we had to source another one entirely. (For the purpose of this review Boosty did also provide us with a BT Hub router, which can accommodate USB connection, but we like to test things at home as if we’re real customers).

Once connected – and it’s literally a case of plugging in the Ethernet from router to router and USB to power – the Boosty blinks a blue light through its semi-transparent skin, which turns green to confirm things are operational. Download the BoostyLink app to your phone/device (iOS and Android platforms), which is a mere 1.9MB, and linking phone via SIM to Boosty router is just a couple of clicks away. It’s really easy to setup. Or if you’d rather use a Mi-Fi instead of a phone this is possible too.

In our head we imagined Boosty to be all-inclusive with a SIM slot on board; an all-in-one box that could handle everything all on its own, just like a Mi-Fi. That’s not the case, with the required mobile connection raising a few potential issues: having the app active on your device adds to the potential power-drain of your device; if you have mobile data limits or potential costs with a given SIM package then you may find your allowance is quickly used up; and if mobile signal is poor then it’ll be of little help. 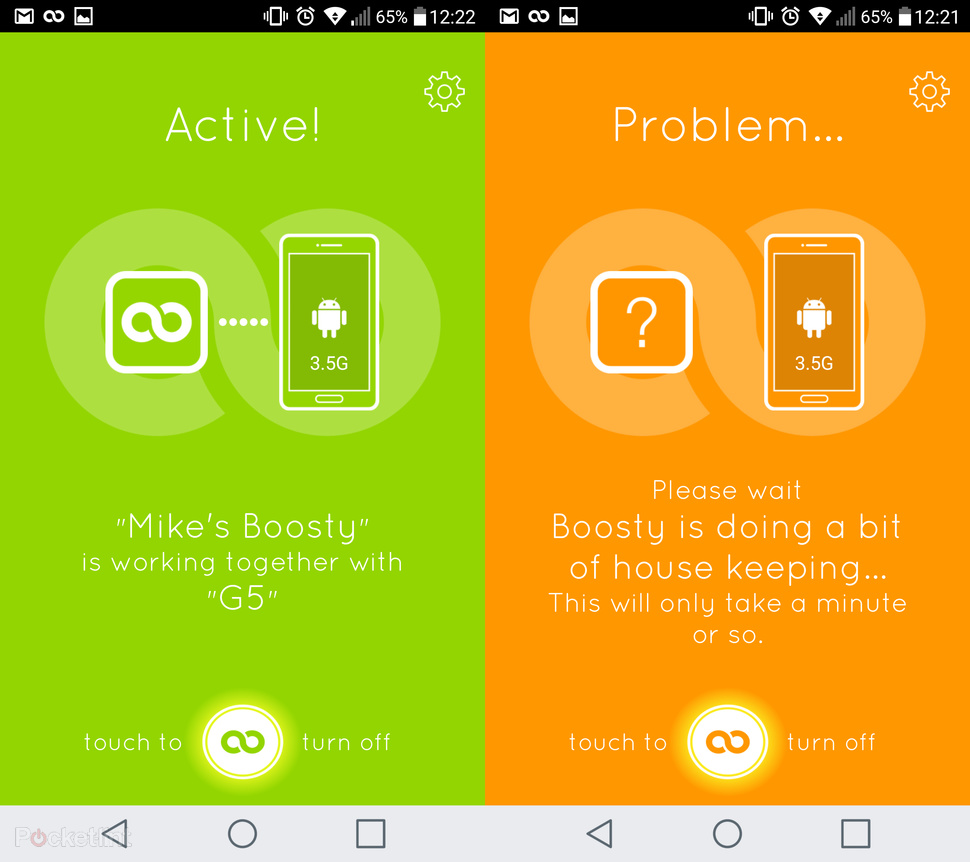 On the other hand having an app means you can better position your phone for a decent signal; it also opens up on/off controls; plus it’s easy to see whether Boosty is active, how much data it’s used and to remotely set usage caps from 100MB to 29.9GB. A more detailed browser-based interface allows you to designate/deny connected devices, view usage speed, activate Turbo, and dig deep into detailed settings.

Using Boosty means speed limitations too: it works on broadband lines 12Mbps and below, to offer a total bonded speed of up to 16Mbps (so if your connection is slower than this Boosty can be used to “top-up” the speed). Now 16Mbps is obviously slower than you’ll potentially get from broadband proper, but as a patch-up that’s as good as bottom-end 4G connectivity.

And so to the elephant in the room: using Boosty limits overall broadband speed to 40Mbps. If you’ve got a decent connection then that’s not ideal. In our scenario, for example, we typically achieve around 55Mbps download speeds using Virgin Media (still hardly great by today’s standards). Having Boosty plugged into the Virgin Media router (but not activated via the mobile app) and that’s reduced to 35-40Mbps in our tests. 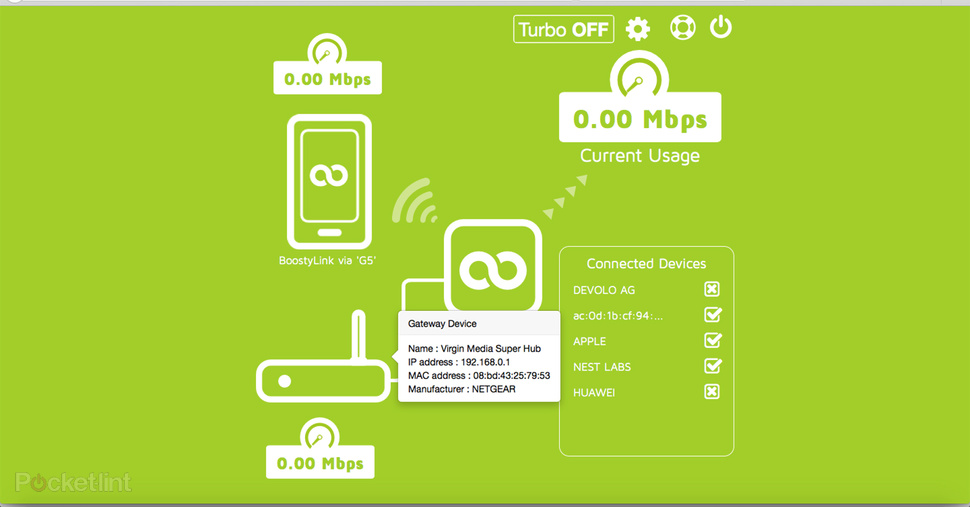 An alternative option would be to buy a separate Mi-Fi with pre-loaded SIM and just sync to that when there are outage issues – sure, that won’t mean seamless connectivity, but it won’t set you back by annual subscription fees or cap your download speeds at all times. The question, therefore, is how essential is seamless connectivity to you and whether it’s worth the £39 per year. If you have fairly poor speeds in a rural area then we can see the obvious benefit of such a device though.

We think the idea of Boosty is great. Banish broadband outage with a package that’s easy to setup and relatively cost-effective if you have a decent SIM plan.

It does have its issues, though, including its speed caps, the potential cost you may incur (entirely depends on your SIM and provider’s plan), and that if you don’t have a decent indoor mobile connection anyway then many of its potential benefits are outweighed.

Overall, having used Boosty, we suspect it will most widely benefit those home-workers with unreliable and slow broadband connections. It has its limitations, but has its potential benefits for the right users too.

Don't miss a deal at Marks and Spencer
Best offers at Adobe
Discounts, Sales and Deals at Newegg
Save your money with Go Daddy
Online-Shopping with Microsoft Store
Best products at Vimeo
Latest Posts