For almost two years, the second-generation ASUS Chromebook Flip has been the best Chromebook for most people. It hit the sweet spot of price, performance, design and features in a way few other Chrome OS devices have, and it’s still one of the best options on the market. But two years is a long time in laptop-land, so ASUS is releasing the new Chromebook Flip C434 with a bigger screen, newer processor and higher asking price.

At $579, it costs a full $100 more than its predecessor, and it’s not immediately obvious what you’re getting for that extra cash. That makes it a tougher sell, especially when there are so many inexpensive Chromebooks on the market. I called the last Flip “the king of Chromebooks,” but it’s not a foregone conclusion that the latest one will keep that title.

The latest ASUS Chromebook Flip is a solid all-around performer, even if it’s larger, heavier and more expensive than its predecessor. It gets all the essentials (like the keyboard, trackpad and display) right with performance that’s good enough for most potential buyers. If you’re looking for a budget Chromebook, look elsewhere, but otherwise this laptop is still one of the best Chrome OS options out there.

The new Flip’s all-aluminum body makes a good first impression with its polished, chamfered edges. Not that the previous Flip was low-quality, but the latest model feels solid and well-made, and the shiny edges add some much-needed visual flair. For the most part, though, if you’ve been in a coffee shop in the past five years, you’ve probably seen dozens of silver aluminum laptops that look like the Flip.

The screen, however, stands out. ASUS included a 14-inch touchscreen, which is noticeably larger than the 12.5-inch display in the previous model. ASUS was also able to bump up the screen size without significantly increasing the Flip’s overall footprint, thanks to some razor-thin bezels around the display. The 2017 Flip did have some pretty chunky bezels, particularly above and below the display, which made the computer feel like it was from a different era. I’m glad ASUS decided to slim things down. 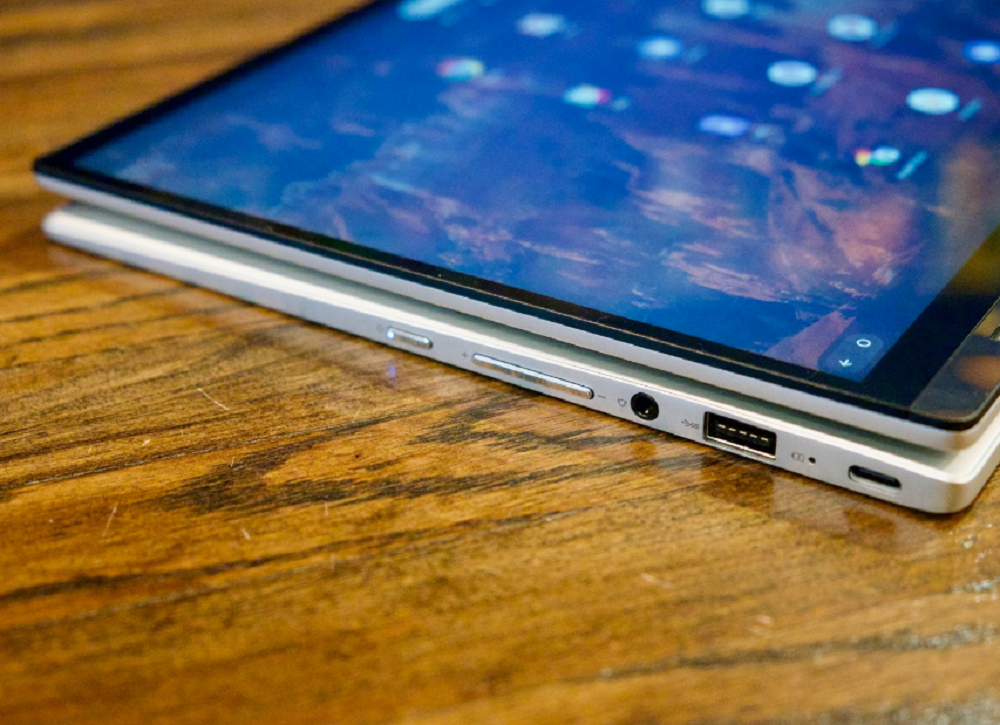 Otherwise, the 1080p screen is sharp and bright, and it looks better than I’d expect for a computer in this price range. The only real downside is that running at the native 1080p resolution makes everything a little too small, but scaling things down makes some UI elements a little fuzzy. I generally stuck with the lower setting and accepted the fact that not everything on the screen was pixel-perfect sharp.

While the larger screen doesn’t make the new Chromebook Flip much bigger than the previous model, it is still larger, thicker and heavier. The Flip weighs in at 3.2 pounds, more than half a pound more than the older model. It’s a strange design choice, because like its predecessors, the Flip has 360-degree hinge, which lets you flip the computer into tablet, tent and stand modes. But the utility of a 3-plus pound tablet seems questionable at best.

I already felt like the last Chromebook Flip was a little too big to be used as a convertible, and now it’s definitely too big. I personally find little utility in tent or stand configurations, but the size at least isn’t an impediment to using the Flip in those modes. But it is just too big and heavy to use as a tablet. At this point, the 360-degree hinge is just making the computer more expensive without offering any useful features. But even if ASUS just went with a traditional clamshell laptop hinge, the Flip would still feel clunky for a modern laptop, particularly since its low-power Intel M3 processor doesn’t need a fan. At the very least, the hinge is strong and stable and feels like it’ll hold up to repeated flips over time.

Those complaints aside, using the new Flip purely as a laptop is an enjoyable experience — ASUS once again paired a nice display with a good keyboard and trackpad. The backlit buttons have plenty of travel and remind me a lot of the keyboard on my old MacBook Air. There’s no learning curve or adjustment period, which is a delight in this era of ultra-shallow keyboards. The trackpad isn’t quite as large or responsive as what you’ll find on new MacBooks or the best Windows laptops, but it didn’t slow me down either. 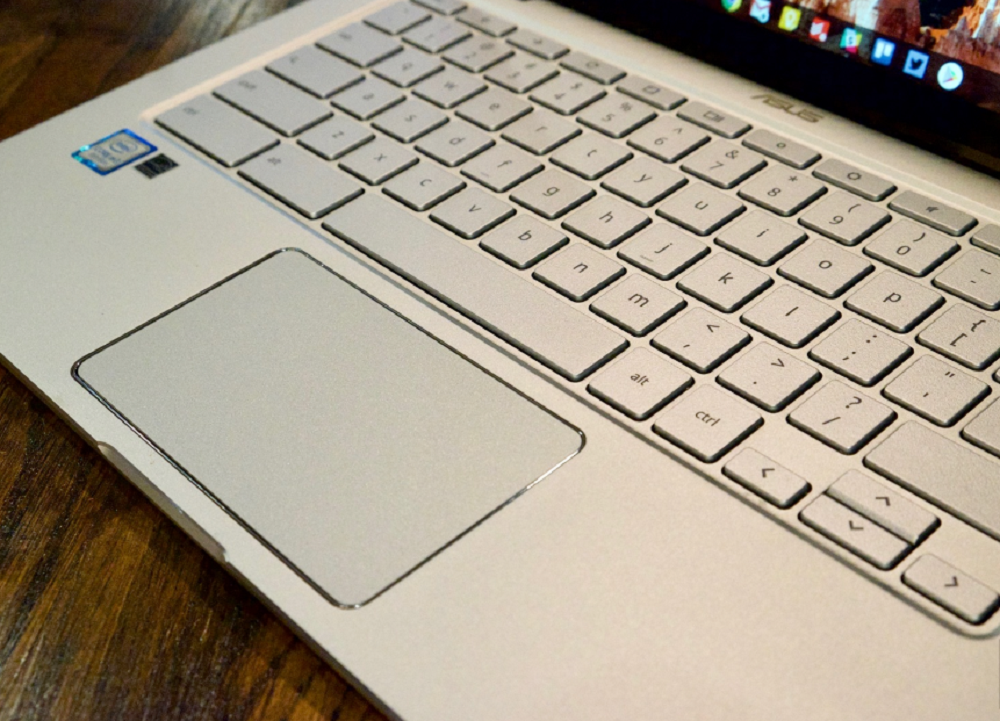 As far as specs go, the Chromebook Flip pairs an eighth-generation Intel Core M3 processor with 64GB of storage and 4GB of RAM. While I think that an M3 CPU is enough for most things people do with Chromebooks, having only 4GB of memory occasionally felt limiting.

My typical workload involves between 10 and 20 open browser tabs along with apps like Todoist, Keep, Slack, Trello and Tweetdeck. That all mostly ran fine, but music playing from the Spotify Android app would occasionally skip when I jumped between windows. And there wasn’t enough RAM to keep all my browser tabs loaded, so sometimes I’d be stuck waiting for a page to refresh. That’s the kind of thing that happened frequently on older iPads, but it’s not something I see often when using the full version of Chrome.

You can upgrade the Flip to a faster Y-series i5 or i7 processor and double the RAM and storage to 8GB and 128GB, respectively, though it’s unclear right now how much that’ll cost. While I’d probably just stick with the default processor and storage, I would definitely shell out for more RAM. That said, people who do a little less multitasking could probably get by with the base model.

One place where the new Flip definitively trumps the old model is battery life — this is one of the better Chromebooks I’ve tested in that regard. I’m getting around nine hours per charge, while I struggled to get seven from the previous Flip. It’s one of those laptops I can just toss in my bag for the day and never really have to worry about charging, which is freeing. And when it runs dry, the USB-C charger can juice the Flip back up in about an hour. 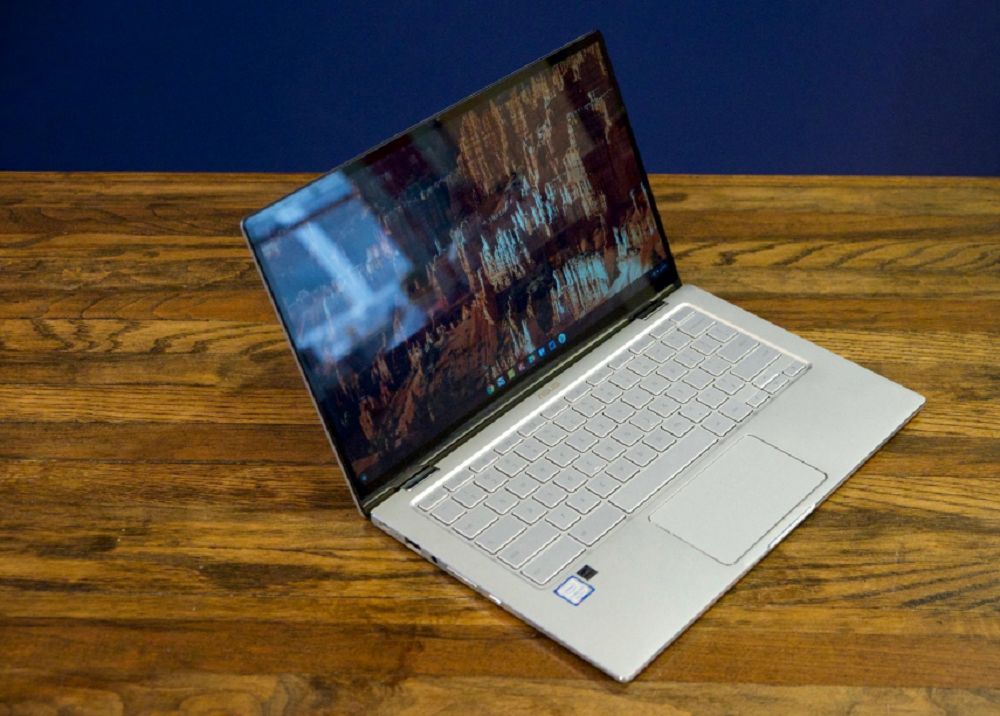 Ultimately, the new Chromebook Flip presents a slightly different set of compromises compared to the 2017 model. It’s a little big, heavy and expensive for a Chromebook, but it has one of the better screens you can find on a laptop in this price range. Its convertible features have questionable utility, but it works great as a conventional laptop. If you don’t need to push it too hard, the base model should be a fine performer, and upgrading to 8GB of RAM is a worthwhile investment for multitaskers.

After a few weeks with the 2019 Chromebook Flip, I’m still a little reluctant to call it the king of Chromebooks. That’s mostly because of the price: $570 and up feels expensive and limits its appeal compared to the 2017 mode. But, the Chromebook Flip is still probably the best all-around Chrome OS device on the market. If your needs are basic, there are plenty of cheaper Chromebooks that’ll do the job. But the new Flip is a well-made and capable laptop, even if it costs just a little too much.

Don't miss a deal at Marks and Spencer
Best offers at FNAC
Discounts, Sales and Deals at Go Daddy
Save your money with Currys
Online-Shopping with Ticketmaster UK
Best products at Boohoo
Latest Posts