Apple is gunning for Windows users, but can the iPad Pro tempt them?

Introduction and repositioning the iPad

“This is an amazing statistic: there are over 600 million PCs that are over five years old in use today,” said Phil Schiller, Apple’s head of marketing, at the company’s launch event on Monday. “This is really sad,” he continued, to applause and laughter.

Schiller, one of Apple’s most visible executives, had just made the case that the iPad Pro, the company’s larger and more powerful tablet, was looking to attract old Windows users to Apple’s platform. “We all know that Windows was conceived before there was an internet, before there was social media,” he said, hinting at the perceived benefits of iOS, which was conceived 22 years after Windows first launched, well into the ‘Web 2.0’ era.

This rare mention of a competitor’s product at an Apple event came with a purpose – the company is looking to reposition the iPad as a computer, with the features and upgrade cycle to match, that will eventually replace what many people consider to be a traditional PC today.

But Apple has been moving round to taking this angle for a while now. In an interview given around the time of the original iPad Pro’s launch, Apple’s CEO, Tim Cook, explicitly questioned why anyone would want a PC in 2016. “I think if you’re looking at a PC,” Cook said, referencing the iPad Pro, “Why would you buy a PC anymore? No really, why would you buy one?” 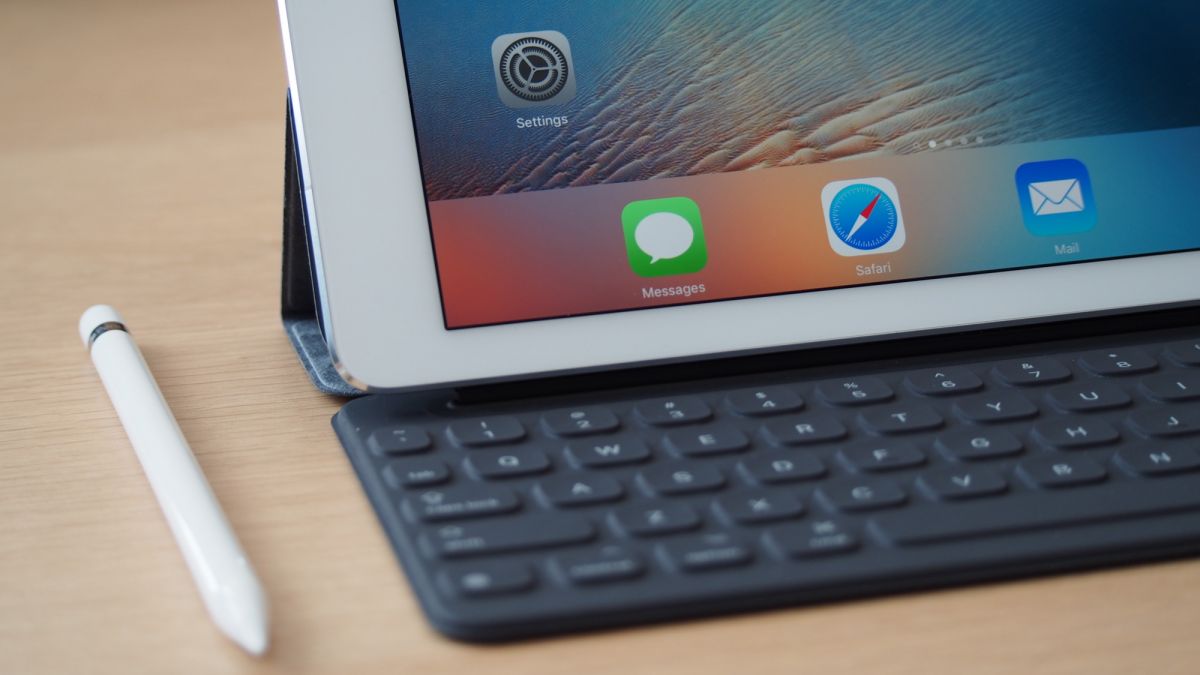 The repositioning of the iPad from a device Steve Jobs used while sitting in an armchair on stage to a powerful, capable computer moved another step forward when Apple unveiled the 9.7-inch version of the iPad Pro. It’s unclear what will happen to the Air branding, but it doesn’t look good going forward. Apple will still sell the iPad Air 2, but at a reduced cost.

“Many people will find the iPad is their ultimate PC replacement,” continued Schiller, driving home a narrative that has been used by Microsoft with its Surface devices: tablets are the new PCs as internal components get thinner, lighter, and more powerful. In testing, the iPad Pro is about as powerful as a MacBook Pro from a few years ago and for most people that’s enough.

The positioning isn’t bulletproof, however. Apple said that 200 million ‘9.7-inch iPads’ – i.e. iPads since 2010 – have been sold, which seems like a big number except it spans six years. In almost every year since 2010, the same number of laptops have been shipped. Tablets are set to grow over the coming years, but desktop and laptop sales will remain relatively unchanged.

The iPad has undoubtedly had an effect on the overall PC market, but its grip is far from firm. Apple has failed to drum up increased appetite for the iPad in recent years and sales have fallen as a result, peaking in 2013. Sales of 2-in-1 computers – a combination of a laptop and a tablet – have increased during the same period, however, but the company has been slow to react.

Microsoft and Lenovo have both released successful hybrids and the iPad Pro was widely accepted to be a response to that. This, then, is likely why Apple is courting Windows users so hard – if it can start to poach the customer base from its rival, then obviously that’s a big victory. 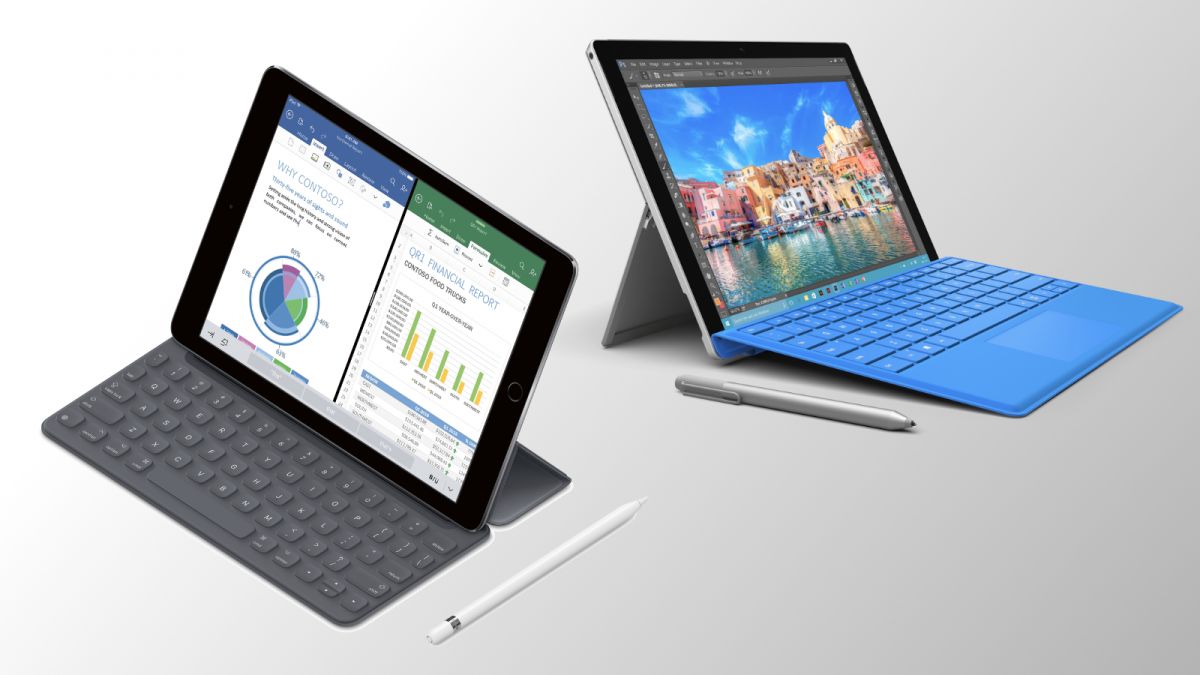 After the almost unilateral failure of Windows 8, Microsoft has turned the ship around and created, in Windows 10, something consumers want. By combining the best bits of a desktop and tablet operating system, the company has created a compelling experience that works well on a hybrid, desktop, laptop, or tablet.

iOS is a different story as the primary input is meant to be a touchscreen. This is fine for casual apps but is less than ideal for complex tasks and specific programs, many of which are built exclusively for Windows. Big businesses, for example, often rely on Windows-only software that wouldn’t port well to Apple’s operating system – and that’s unlikely to change anytime soon.

Apple has been building out the features in iOS to make it more PC-like. Split-screen multitasking made its way into iOS 9 and the company has been working on multi-user support, but has not yet released the feature to the general public. Deals with companies like IBM and Box also bring attractive enterprise applications to the platform.

Really wowing Windows users is going to be an uphill struggle, but the overall trends in the PC industry may be working in Apple’s favour as people become more accustomed to smartphones (and the associated touchscreens), apps, and a lighter experience.

The majority of work done on PCs, especially by students, is text input and editing (as well as Facebook scrolling) and these are tasks that can be achieved on a tablet just as well as a ‘proper’ laptop. This has been true for a while, but the technology that allows the iPad Pro to exist – specifically Apple’s very powerful, but very power efficient, A9X processor – has only just come about. 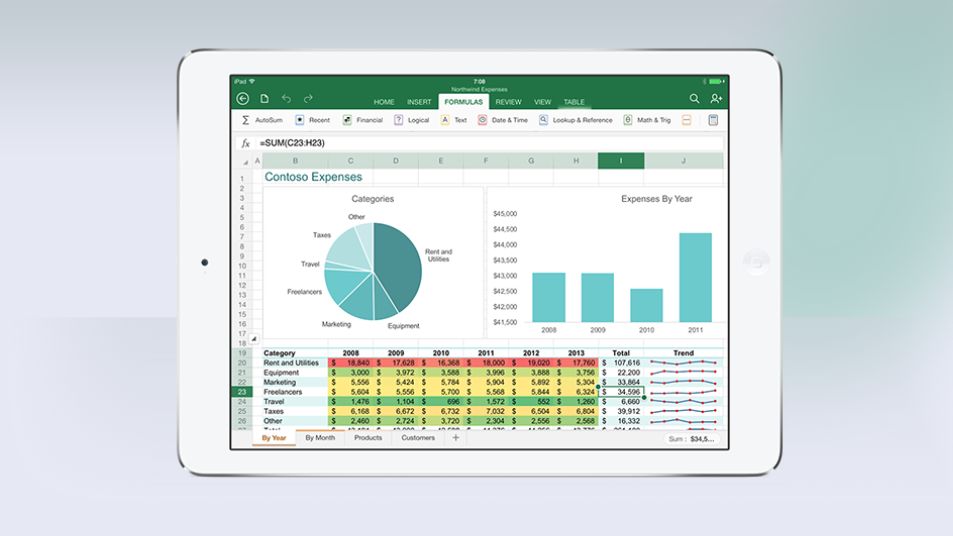 Microsoft has actually helped this future along by providing the Office suite on iPad. The set of applications, which require a subscription to Office 365 to work fully, are used by more than 340 million people across iOS and Android devices, according to the company.

Apple is betting on a new type of computing that is based on the assumption that people don’t actually need the power, and associated size or weight, of a full-on laptop. The one million iPad apps in the App Store combined with a 9.7-inch or 12.9-inch display (and accessories) is enough for most people and soon, Apple hopes, they will migrate across from Windows.

0 0 0
Previous ArticleAnalysis: If Apple starts making its own GPU, what will it mean for iPhone gaming?
Next ArticleCurious who's helping the FBI unlock the San Bernardino iPhone? We may now know
Comments (3)

Don't miss a deal at Virgin Media
Best offers at Myprotein
Discounts, Sales and Deals at Boohoo
Save your money with Turbo Tax
Online-Shopping with Ancestry
Best products at The Home Depot
Latest Posts