With wireless charging, extra RAM and a faster charger, is the Fire HD 8 Plus worth the extra money?

In the nine years since Amazon announced its first tablet, the Fire lineup has received several major upgrades. The Fire HD 8 is the latest in a long line of tablets and it’s perhaps its most substantial update yet.

Aside from the usual decision whether or not to pay extra and remove the lockscreen adverts, though, Amazon has also launched a souped-up model for your consideration this year. The Fire HD 8 Plus, as the name suggests, provides a handful of extras for a bit more money, but should you stump up more cash or buy the regular model instead?

The differences between the Fire HD 8 Plus and the basic version are relatively minor. Design-wise, they’re practically identical and both have a 1,280 x 800 resolution screen, drop-friendly plastic chassis, and USB-C charging. Both tablets also benefit from a new MediaTek MT8168 processor and run a tweaked version of Android 9 Pie with Amazon’s Fire OS 7 launcher placed on top. 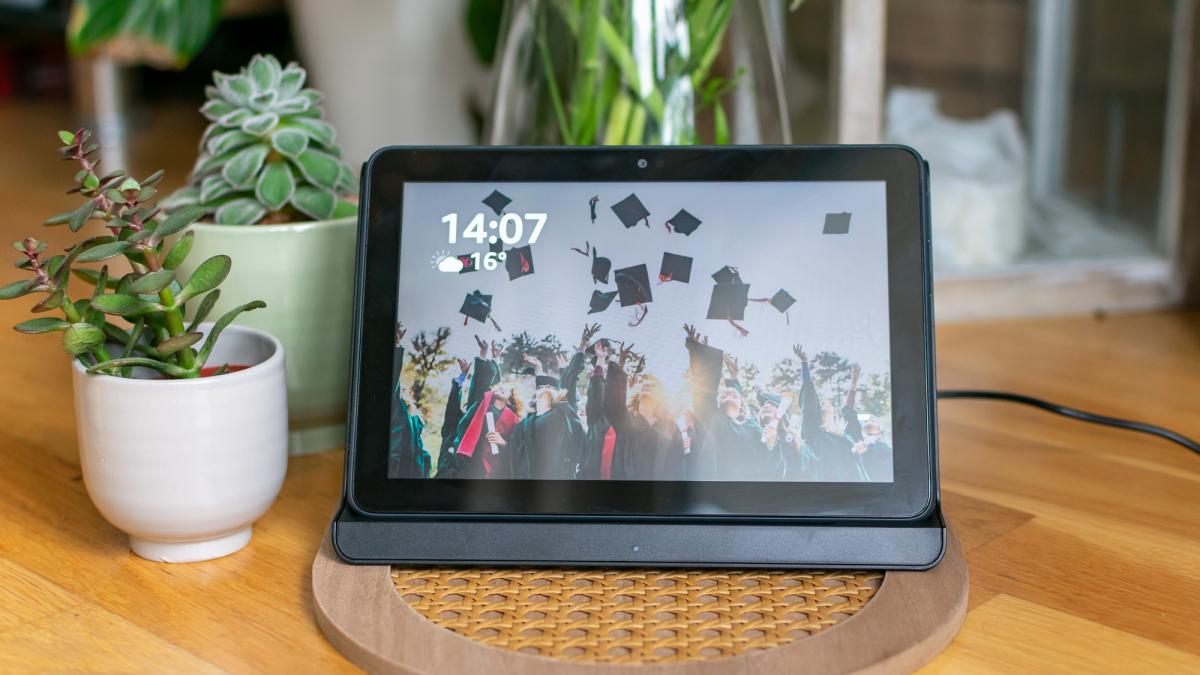 So, what do you get for the extra money? Well, the Fire HD 8 Plus includes 3GB of RAM, rather than the 2GB offered with the normal model, and has a faster 9W charger in the box. The Fire HD 8 Plus also comes with three months of Kindle Unlimited for free.

The main reason why you might want to pick up the Fire HD 8 Plus, however, is for wireless charging. The tablet works with Amazon’s new Wireless Charging Dock (£40), which can also be used as a stand for a pseudo-Alexa smart display.

If you want to buy both the Fire HD 8 Plus and Wireless Charging Dock, Amazon is currently running a bundle offer for £140, saving you a total of £10. If you prefer a larger screen, and still don’t fancy spending a huge amount, however, last year’s Amazon Fire HD 10 is another good option starting at £150.

There’s not a jot of difference between the two tablets as far as design is concerned. If I was pushed for time, I could simply copy and paste this section from my review of the regular Fire HD 8 and it would do the job. In fact, the Fire HD 8 Plus is identical in so many ways that I’m in danger of repeating myself as it is. 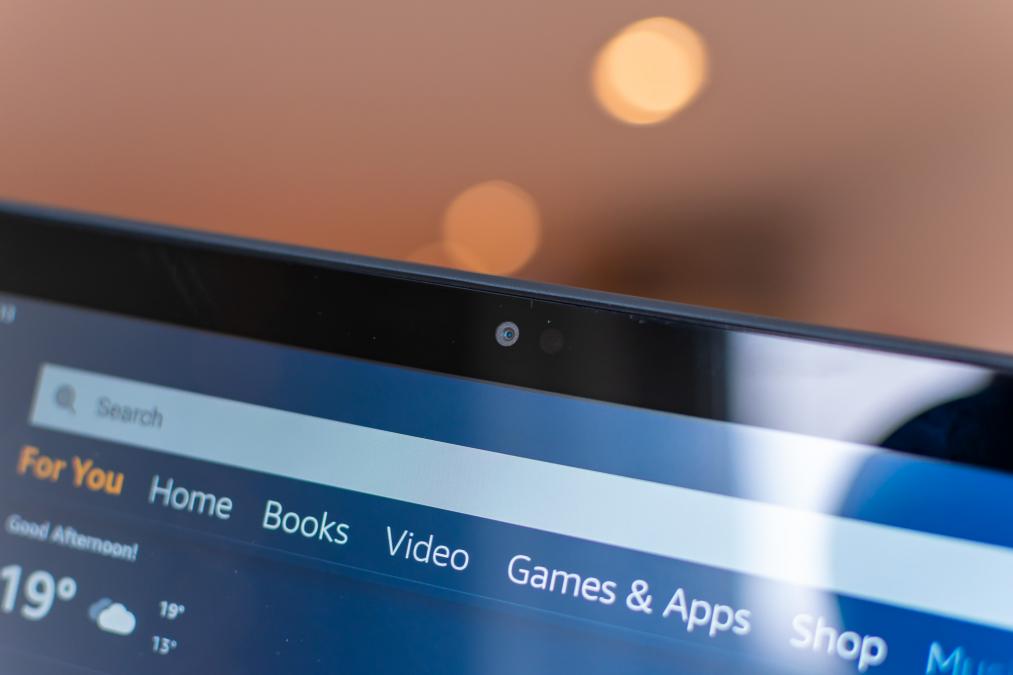 The Fire HD 8 uses the same hard plastic backing as the 2018 model, and it can be picked up in six different colours: black, plum, twilight blue, white and slate. It is clearly designed to be used in landscape orientation, with a pair of top-firing speakers on one of its long edges, and a 7MP selfie camera sitting below, just above the screen.

The Fire HD 8 Plus also uses USB-C for charging, rather than the micro-USB charger supplied with its predecessor. Amazon also includes a faster 9W charger in the box (the other model comes with a 5W charger) which can charge the tablet from empty to full in less than four hours.

Of course, a key new feature this year is the arrival of wireless charging, which is only available on the Fire HD 8 Plus. As I’ve already mentioned, for an additional £30 the tablet can be bought in a bundle with Amazon’s own Wireless Charging Dock, which is a rudimentary wedged stand that allows you to place the tablet in either landscape or portrait orientation, at a fixed angle.

There’s not much else to say about it though, really, except that it charges the Fire HD 8 Plus to 80% in less than two hours and transforms it into a makeshift Echo Show-like device. This allows for all sorts of things, from streaming Amazon Prime Video to showing graphics for a seven-day forecast when you ask about the weather.

Despite what Amazon’s heavy-handed marketing materials would have you believe, however, the optional Wireless Charging Dock isn’t a necessary purchase. Because the Fire HD 8 Plus uses the Qi wireless charging standard, most third-party wireless chargers will work just fine.

Back to the tablet itself. The Fire’s 8in screen uses an IPS panel with a resolution of 1,280 x 800. This remains unchanged from previous models, which is a bit of a shame. The tablet’s pixel density of 189ppi is quite poor by modern standards, too. 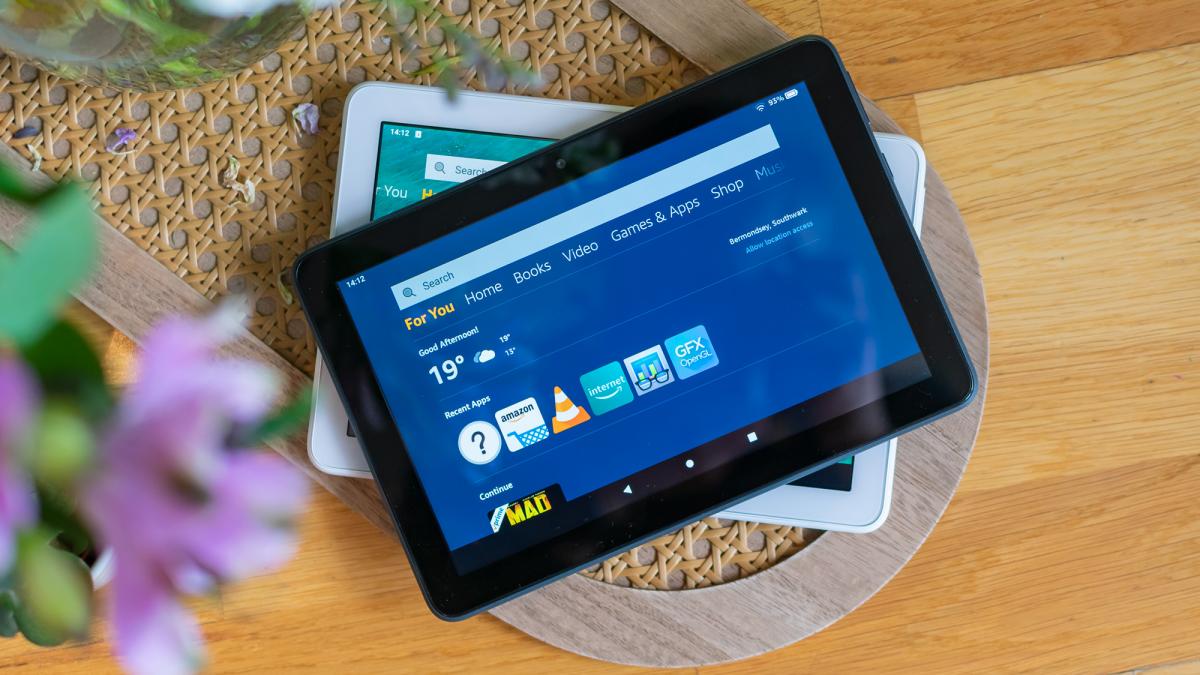 An overall sRGB colour gamut coverage of 74% isn’t ideal, either. The screen looks quite dull compared to higher priced tablets such as the Samsung Galaxy Tab S6 Lite and iPad family, but an overall contrast of 1,381:1 isn’t too bad. Viewing angles are also better than expected, despite the overly reflective screen coating.

An area of major improvement is in the Fire HD 8 Plus’ performance. Both of Amazon’s new 8in tablets are fitted with a newer MediaTek MT8163 chipset, which is clocked at 2GHz and uses a Mali-T730MP3 GPU for graphics processing duties. As I mentioned earlier, the Fire HD 8 Plus also has 3GB of RAM, instead of the 2GB offered by the regular Fire HD 8.

As expected, then, performance is the best we’ve seen from a Fire tablet to date, but it can still feel a bit sluggish from time to time. In the Geekbench 3 test, the Fire HD 8 outperformed the 2018 version by up to 50%. This translates to a tablet that feels much more fluid and responsive in operation than ever before, but you will still notice a bit of slowdown when quickly switching between applications, for instance.

Gaming performance is equally good, although it’s worth highlighting there’s a rather limited selection of games in Amazon’s app store. The Fire HD 8 Plus reached an average frame rate of 24fps in the GFXBench Manhattan 3 on-screen benchmark, more than tripling the score of the previous model.

Running our in-house battery test, which plays a 20-hour looped video with aeroplane mode engaged and the screen set to a standard 170cd/m² brightness, the new Fire HD 8 Plus lasted over 17 hours before needing a recharge. This is frankly extraordinary and is one of the best results we’ve seen from a tablet, no matter the cost.

Aside from the unloved screen, the Fire HD 8 Plus is almost the complete package. It’s an affordable tablet which massively improves on previous generations in the hardware department and manages to boost stamina by a considerable degree.

It’s a tablet I would have no hesitation in recommending, although it falls just short of a Best Buy for the simple reason that the Fire HD 8 offers better value for money. Unless you’re keen to use the Fire HD 8 Plus as a tablet-cum-smart display, I’d be inclined to save the £50 and go for the Fire HD 8 instead.

Don't miss a deal at Newegg
Best offers at Boohoo
Discounts, Sales and Deals at Adobe
Save your money with Intuit Small Business
Online-Shopping with Sephora
Best products at Farfetch
Latest Posts