A few months ago I reviewed Alienware’s m15 with OLED and, well, didn’t really know what to do with it. It wasn’t a bad laptop, but it was living on borrowed time. Alienware had already shown off its new “Legend” aesthetic at CES, and by May we knew that the m15 line was transitioning over as well. Why buy the old when the future is so close you can reach out and touch it?

And touch it, we have. The future is here and it’s very bright, quite literally. With RGB LEDs and a white chassis, the redesigned Alienware m15 R2 is a Kubrickian take on the space age. It’s still a powerhouse as well.

Variants on the theme

An expensive powerhouse. The m15 R2 variant we reviewed is damn near top-of-the-line, with an Intel Core i7-9750H, 16GB of DDR4 RAM, an Nvidia RTX 2080 Max-Q and a 240Hz display. Storage is equally excessive, with a terabyte’s worth of SSD space via a pair of 512GB drives in a RAID 0 configuration,

Let’s face it: It’s probably not the variant you’d buy at home, retailing as it does for $3,130. You’d probably want one of the cheaper models, which start at a relatively affordable $1,400. That baseline model’s limited to a Core i5-9300H, a GTX 1660 Ti, and 8GB of RAM—but hey, it’ll still look like an Alienware laptop. 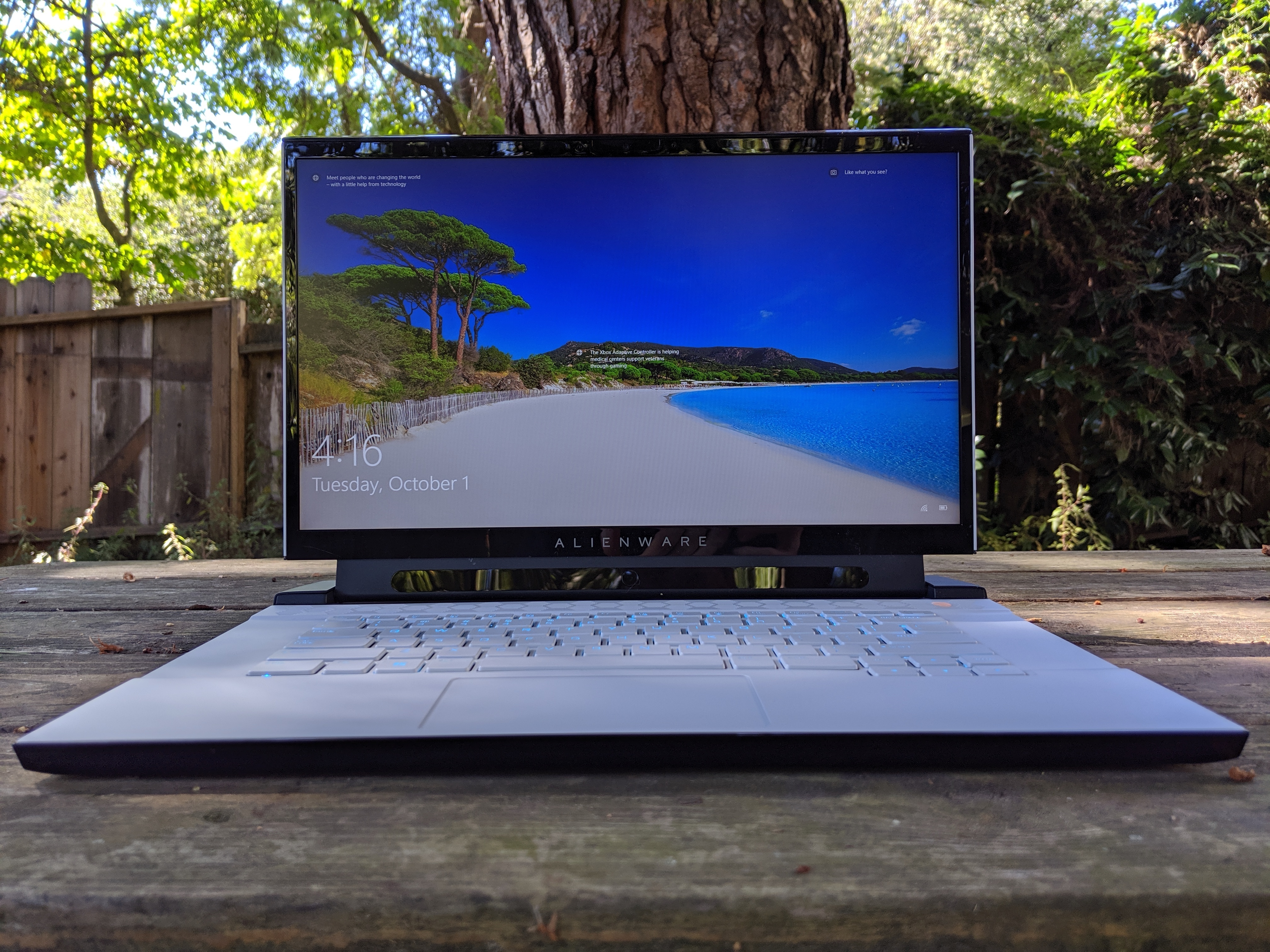 The variant we reviewed is also—you probably noticed—very white. Blinding white. It’s beautiful and elegant and eye-catching, and I really love the look from a distance.

But it’s a look that demands a white-glove approach as well. Beautiful it may be, but the M15 R2’s finish does not hold up to the rigors of a laptop lifestyle. During our review period I’ve managed to put two marks on the top, and I have no idea how. Stacked something on top? Bumped in my bag? In any case, the lower-tier M15 R2 comes in standard black, and that might be the safer bet for long-term upkeep. 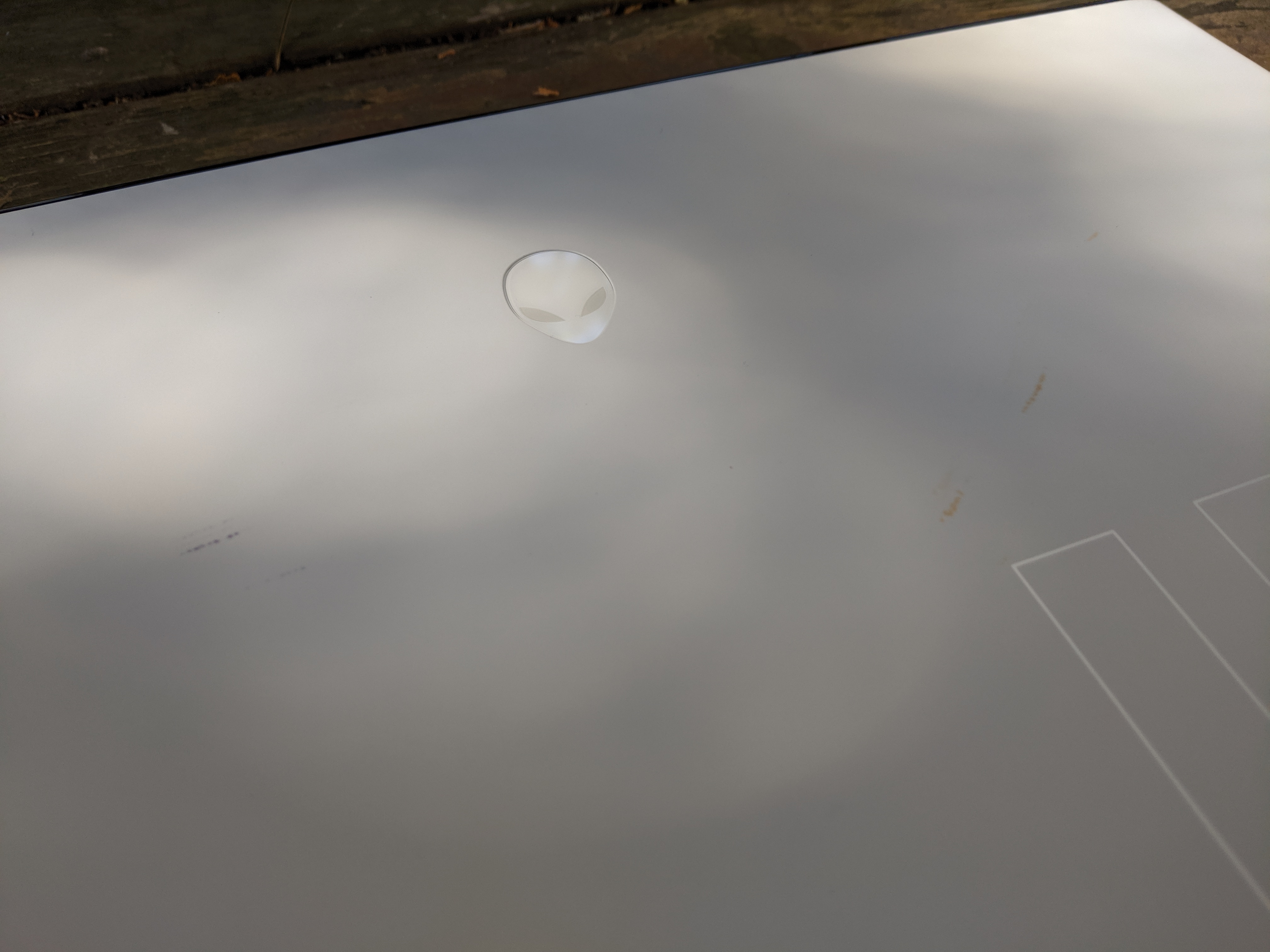 Either way, I love the new look. After six years of silver lids and chunky vents, Alienware’s new “Legend” aesthetic looks properly science-fiction again. The lid’s stylized ’15’ stencil logo is a bit over-the-top maybe, seemingly lifted from the corridors of a space station—but when has over-the-top stopped Alienware?

The ultimate “Yes, they went there” moment is when you realize the laptop’s entire tail lights up, with an LED ring that encircles the ports and rear vents. Now that’s showing off.

I don’t usually go in for gaudy, but there’s something about the m15 R2 that wins me over. It’s ridiculous, and not even all that practical. Using the m15 R2 in a dark room means disabling all the lights or at least using the Go Dim setting, because they’re blinding otherwise. But I love the m15 R2 all the same. It does look futuristic, in a very particular RGB-laden sense. 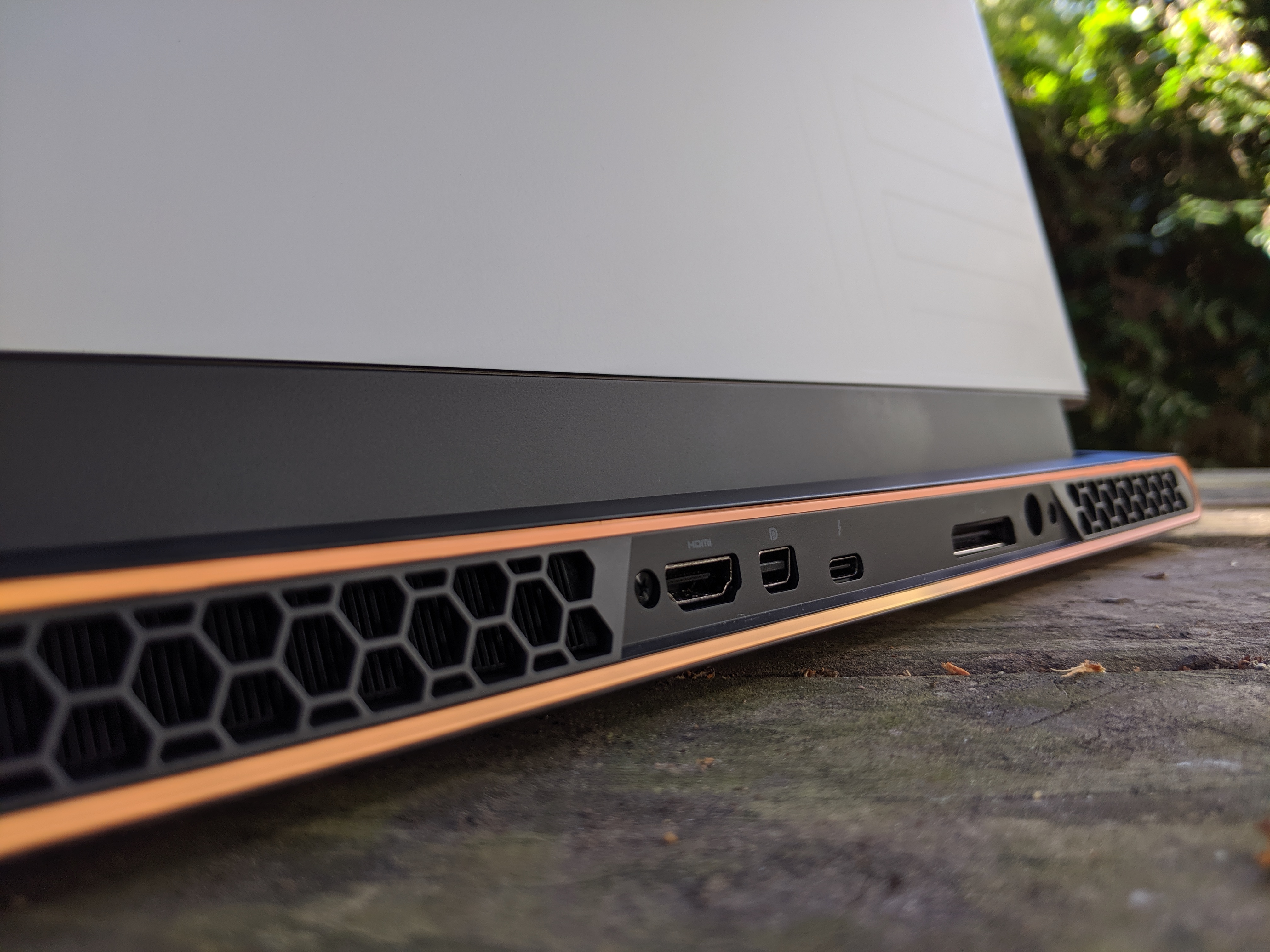 The new design is slimming as well. The m15 R2 isn’t much smaller than the m15 we looked at earlier this year, nor any lighter (at 4.7 pounds), but the redesign’s tapered front edge and overall softer lines give it an elegance that’s long eluded Alienware. It’s properly portable, from a company that until recently only made massive, inch-thick deadweights. Alienware’s laptops have come a long way in a short time—even if they’re admittedly three or four years late to the trend. Better late than never.

And hey, they’re early to the OLED trend—though unfortunately not on our review model. That’s a shame because while our m15 R2’s 240Hz refresh rate is great, the 1920×1080 resolution feels like a compromise on a $3,000 laptop. And while color reproduction is good, it pales (quite literally in the case of shadows) in comparison with the richness of an OLED screen. If you can afford the extra $150 for OLED, the day-to-day benefits are worth it I think, though I still have some worries long-term about burn-in potential.

One area that didn’t need much improvement but received it anyway: the keyboard. I liked the old m15’s keyboard but noted it was a bit shallow. Alienware agreed apparently, as the m15 R2 features a generous 1.7mm of key travel while retaining the old model’s enjoyable clickiness. It feels a bit stiff at first, but after adjusting it’s become one of my favorite laptop keyboards. It feels almost like a Topre switch, only condensed. Also, Alienware omits the numeric keypad this time, which gives the whole keyboard more room to breathe. 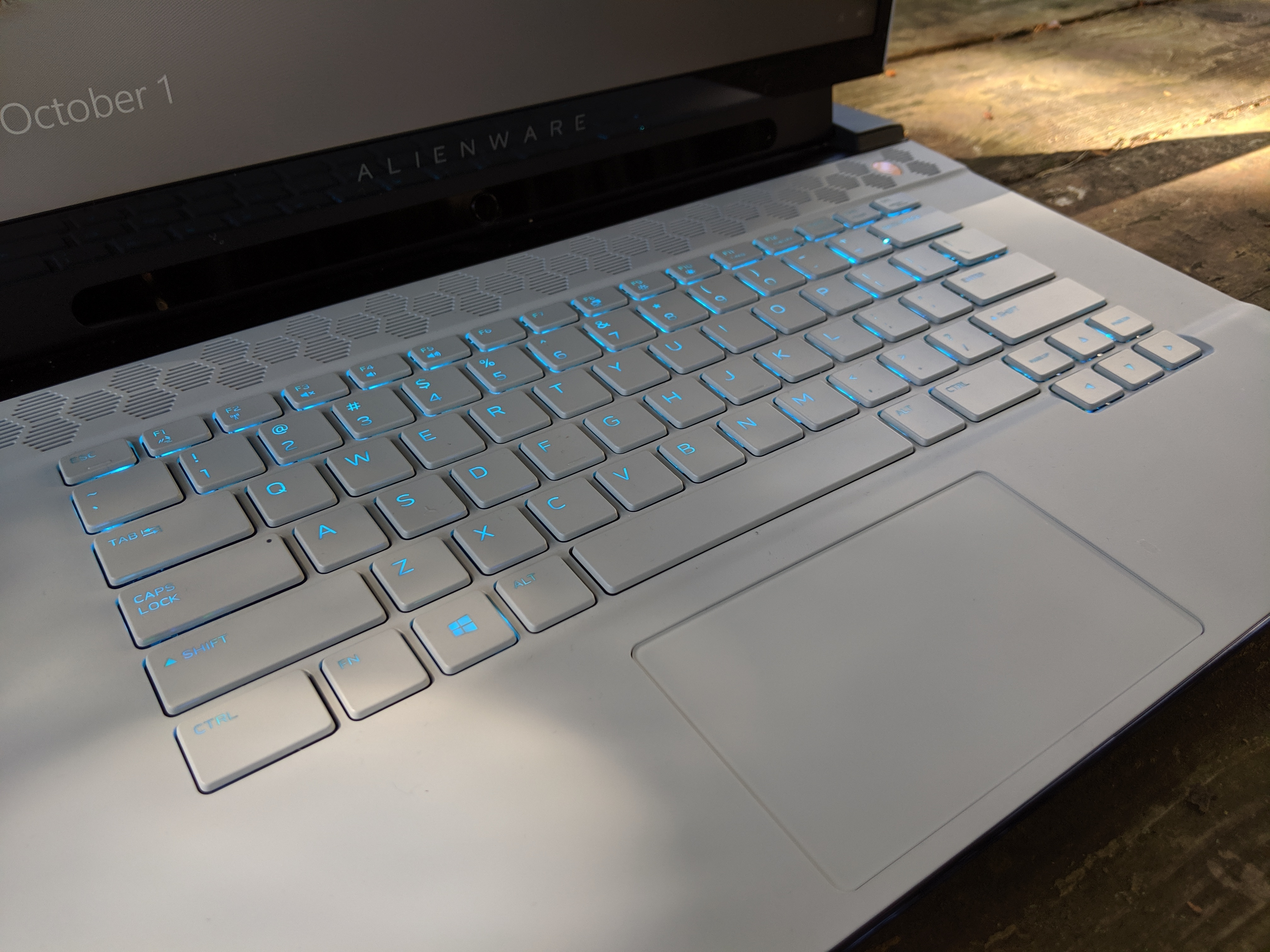 The trackpad continues to disappoint, though. I lamented the lack of dedicated mouse buttons on the old m15. The m15 R2 carries that over, and I think the trackpad might be even smaller than before. Alienware really seems to be saying “Just use a mouse for gaming,” but that’s not always possible. This undersized trackpad is the m15 R2’s most irksome flaw.

And as always, I remain annoyed by Alienware’s rear-facing ports. It’s fine for desk use, but the m15 R2 is small and portable enough you might actually take it elsewhere. Anywhere besides a desk, the rear-facing barrel charger is a serious detriment, as is trying to access the sole USB-C port. (The others, which include HDMI, DisplayPort, and Alienware’s proprietary Graphics Amplifier dock, are less important when away from home.) Thankfully three USB-A ports, ethernet, and a 3.5mm headphone jack are all side-facing.

When we put the old m15 to the test I feared Alienware’s transition to lightweight laptops might hobble performance. Those fears thankfully proved unfounded, and I came away pretty impressed by the m15.

The RTX 2080 Max-Q is the more important of the two. We’ve already had enough hands-on experience with the Core i7-9750H to know it’s an incremental upgrade at best over the Core i7-8750H. Diving into our first test, we ran the m15 through Cinebench’s multi-core and single-core tests to see what kind of CPU performance we were looking at. And the answer? About the same as the old m15. 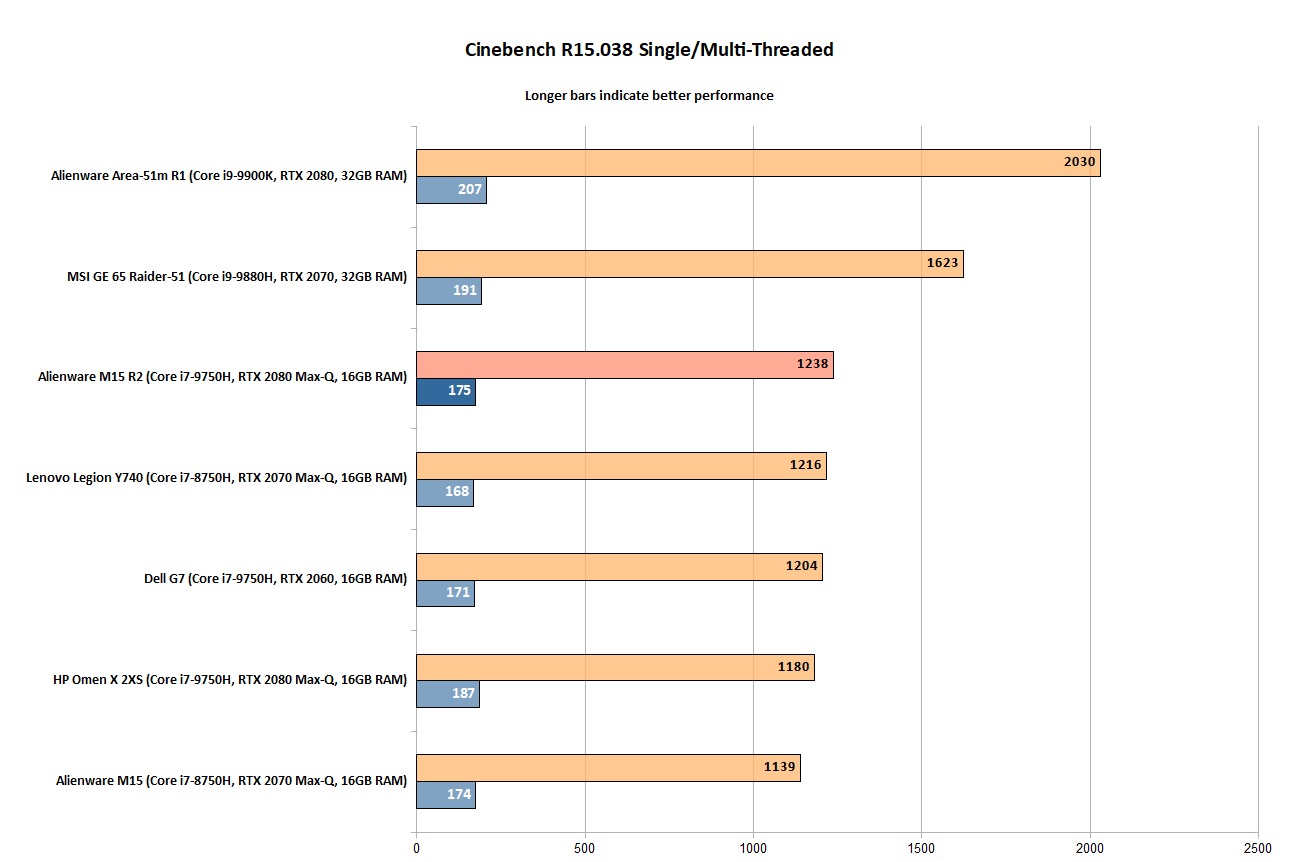 That’s no surprise, really. Intel technically gave the Core i7-9750H a clock speed increase over its predecessor, but thanks to power draw limits and thermal throttling the two behave almost identically in the wild. It’s a pattern we’ve seen across multiple reviews now. The upshot is, while there’s no reason to abstain from the Core i7-9750H, it’s hardly an “upgrade.”

The same pattern plays out in our longer HandBrake test, wherein we use the free utility to encode a 30GB MKV file down to the Android Tablet preset. The m15 R2 posted a faster score than the old m15, but only barely. Given the fact we’ve seen speedier scores come from i7-8750H laptops in the past, the m15 R2’s improved performance here likely has more to do with Alienware’s redesigned cooling solution than the CPU itself. 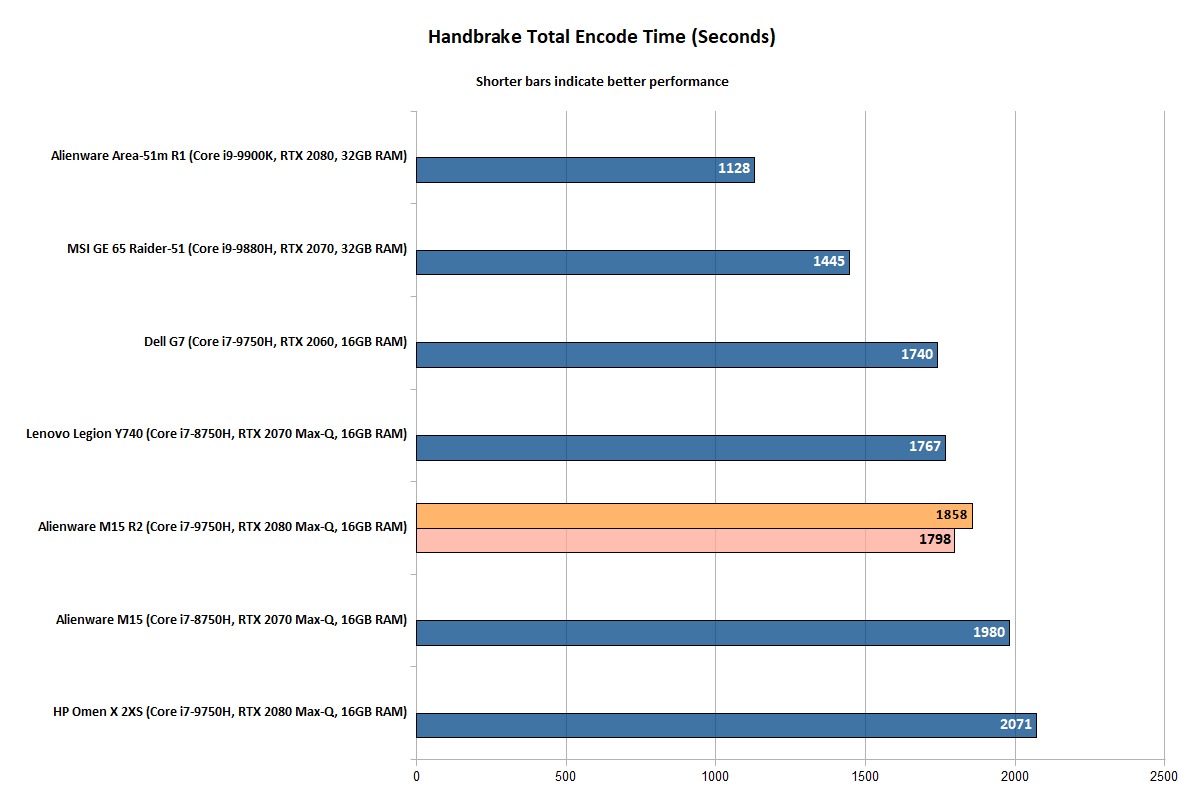 As I said, the RTX 2080 Max-Q is doing most of the heavy lifting when it comes to improving upon our previous m15’s times. That’s disappointing in a way, as I wish we had a one-to-one comparison to test out the merits of the new chassis. All we’ve really proven here is that the RTX 2080 Max-Q is faster than the RTX 2070 Max-Q, which…well, given what you’re paying, I’d certainly hope that’s how it played out.

The m15 R2 with its RTX 2080 Max-Q posted substantially better scores than its predecessor in 3DMark’s FireStrike Extreme benchmark. It’s hard to quantify real-world differences from an artificial benchmark, but whereas the RTX 2070 Max-Q feels barely better than an RTX 2060, the 2080 Max-Q pulls significantly ahead of both and fully justifies its presence, even surpassing the MSI GE 65 Raider-51’s full-sized RTX 2070. 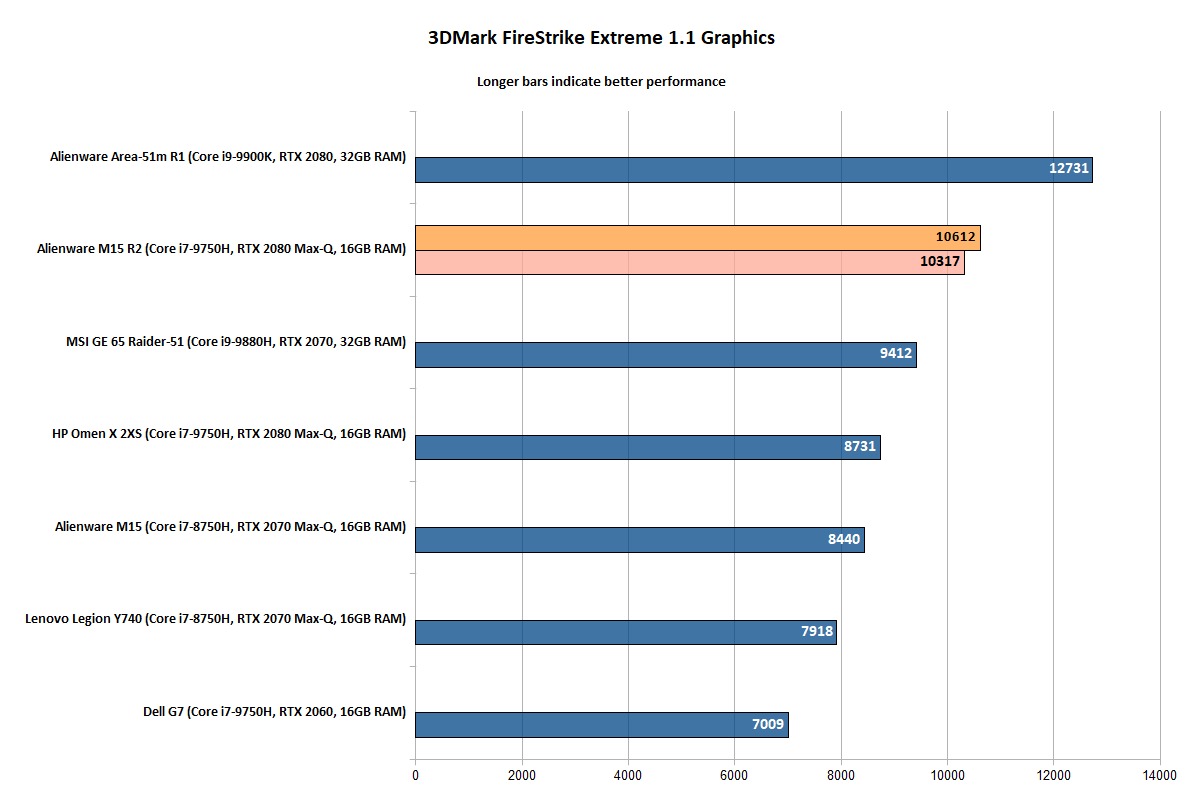 We also ran the m15 R2 through 3DMark’s more recent TimeSpy benchmark, a DirectX 12 test that’s more of a challenge for modern systems—albeit with similar results. 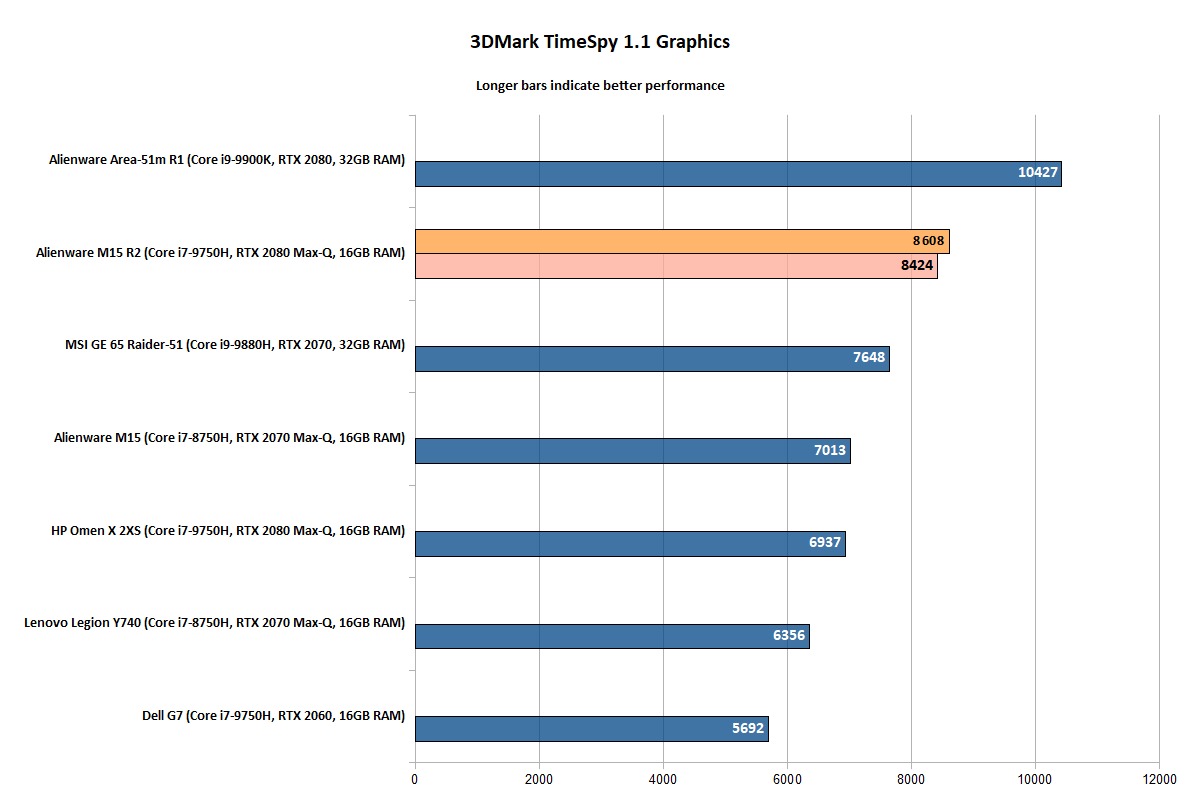 In-game performance is excellent too. With Middle-earth: Shadow of Mordor, the m15 R2’s RTX 2080 Max-Q performed nearly 25 percent faster than the last-gen model, and its RTX 2070 Max-Q,again surpassed the Raider-51’s full-sized 2070 by a significant margin as well. 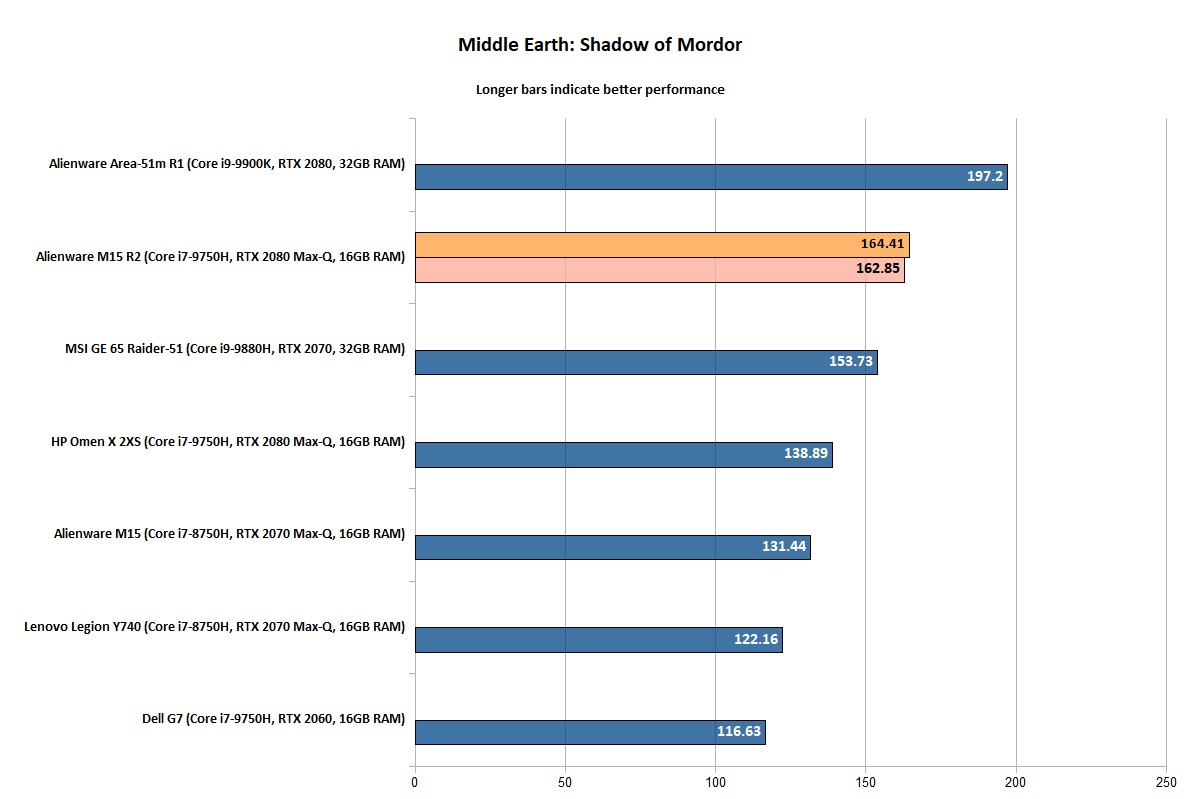 Scores in Rise of the Tomb Raider are a bit less clear-cut because that game takes more advantage of the CPU. Still, the m15 R2 more than holds its own. Note how much the m15 R2 outperforms the HP Omen X 2S as well. Both have the same Core i7-9750H and RTX 2080 Max-Q parts, but the Omen X 2S’s thermal throttling resulted in scores closer to those of an RTX 2070 Max-Q. 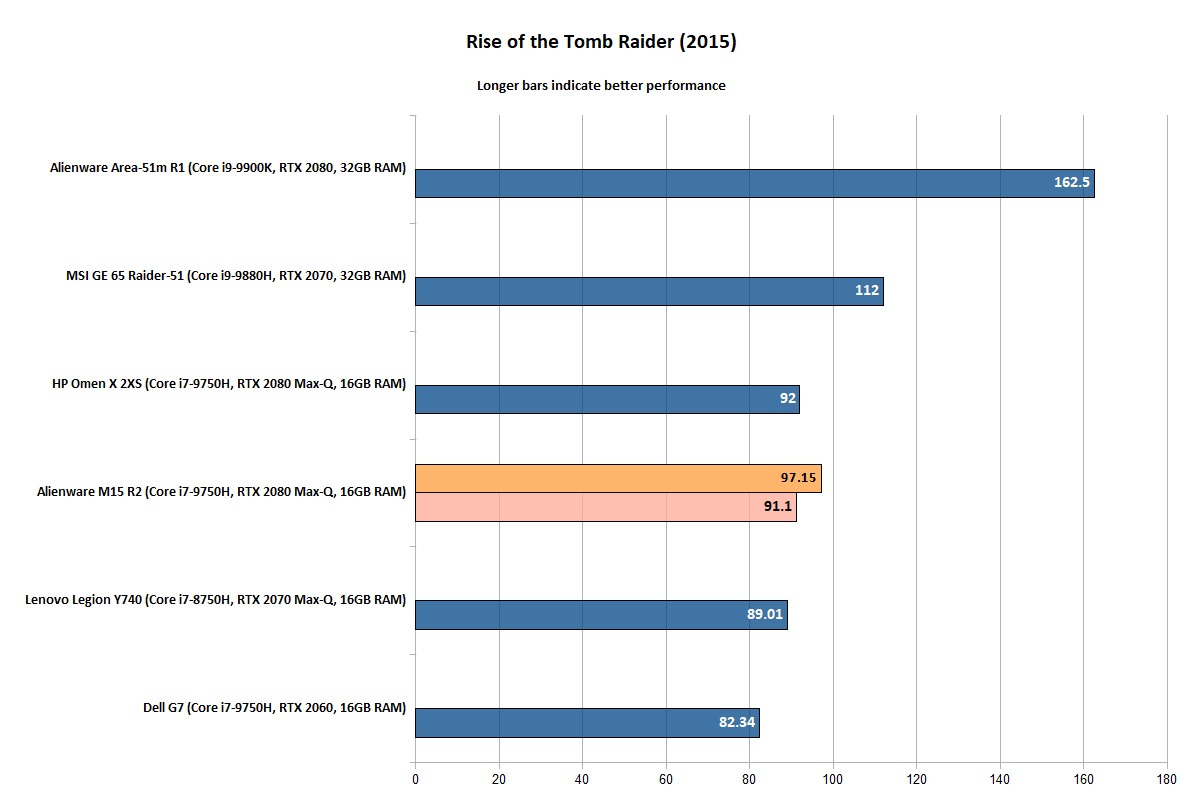 Finally, kudos to Alienware for continuing to surpass our battery expectations. Gaming laptops are notorious for their poor battery life. Those high-end components are hungry, usuallt requiring you to stick close to AC. That’s little comfort when your laptop dies an hour into an international flight. While the m15 R2’s battery still won’t get you from New York to Paris, its five-plus hours of rundown time in our test does far better than most. Keep in mind, that’s not gaming time. Our rundown test involves looping a 4K video file at 250 nits’ brightness, which is far less demanding than even a classic adventure game. You can expect maybe—maybe—half the battery life while gaming. But even so, for a gaming laptop of this caliber? Not bad.

On a related note, the m15 R2’s power brick is massive by modern standards—enough to draw comments when we unpacked the box. We’re well past the days where power bricks were actually brick-shaped, but the m15 R2’s footprint is easily double that of any other laptop I’ve reviewed this year.

Here’s the part where I usually give you a purchase recommendation, but I always find that harder when it comes to these high-end laptops. The Alienware m15 R2 performs as advertised, a powerful machine stuffed into a stylish and portable package. It’s an excellent laptop.

But as I said up top, this probably isn’t the m15 R2 you’re going to buy unless you’ve got very specific needs. An RTX 2060 or even an RTX 2070 Max-Q would do you just fine, especially for half the price. You could even purchase the RTX 2060 model, take the extra money and buy Alienware’s Graphics Amplifier dock and a desktop RTX 2080, and still come out ahead. I’m not recommending you do that, but it goes to show how expensive this RTX 2080 Max-Q-equipped m15 R2 really is.

Alienware’s been firing on all cylinders recently, and if you’re in the market for a laptop I’d absolutely recommend giving the lower-priced m15 R2’s a look. They’re beautiful, they’re durable, and as an added benefit? They come in black. After all, if you’re going to pay this much for a luxury machine, you don’t want it getting scratched the first time you take it out—no matter how futuristic the white version looks. Forget Dieter Rams. Richard Sapper had it right.

Alienware’s redesigned m15 R2 is a gorgeous laptop that puts out impressive performance—though you should probably opt for the OLED upgrade.

Don't miss a deal at Vodafone UK
Best offers at House of Fraser
Discounts, Sales and Deals at Argos
Save your money with Adobe
Online-Shopping with Turbo Tax
Best products at Sephora
Latest Posts