While the souped-up Alienware Aurora R8 can cost a pretty penny, it more than delivers. It’s packed with the latest and greatest from Intel and Nvidia for a high-end gaming experience that blazes through any AAA game you can throw at it. It can tackle 1440p and even 4K gaming to an extent, all tucked into an elegant and understated gaming desktop.

The Alienware Aurora R8 is an appealing upgrade to gamers with demanding needs. Touting powerful components like 9th-generation Intel processors and discrete Nvidia graphics, this is a beast of a gaming desktop PC. That’s while keeping its predecessor’s understated yet gaming-centric design.

That kind of power in a funky design does come at a hefty price, unfortunately. Not for the budget-conscious, the Alienware Aurora R8 also won’t come cheap at $2,000 or more in the US. That’s certainly a premium purchase, especially considering that you’ll find equally powerful alternatives for much cheaper than its asking price.

If you can afford it however, you’re getting just as many bells and whistles as you are getting a lot of power. The Alienware Aurora R8 is highly customizable and upgradable, easing the pain of its price tag in the long run. And, it comes with a well-implemented and easy-to-access chassis for tinkerers out there. That’s without mentioning its attractive yet subtler RGB lighting that delivers a new level of immersion.

In the UK, you can get the same configuration, only with the non-Super RTX 2080 and an included keyboard, for the price of £2,475. In Australia, the same machine runs for AU$4,299 with the only differences being that it comes with an optical drive and also the pre-Super NVIDIA RTX 2080.

The UK’s base model, for £799, unfortunately is a bit weaker than the rest, offering an Intel i3 9100 and AMD Radeon RX 560X, though you do thankfully have the ability to upgrade. In Australia, the base model comes in at AU$1,799 with the same configuration as the US except the base graphics processor (GPU) is a GTX 1050 Ti. 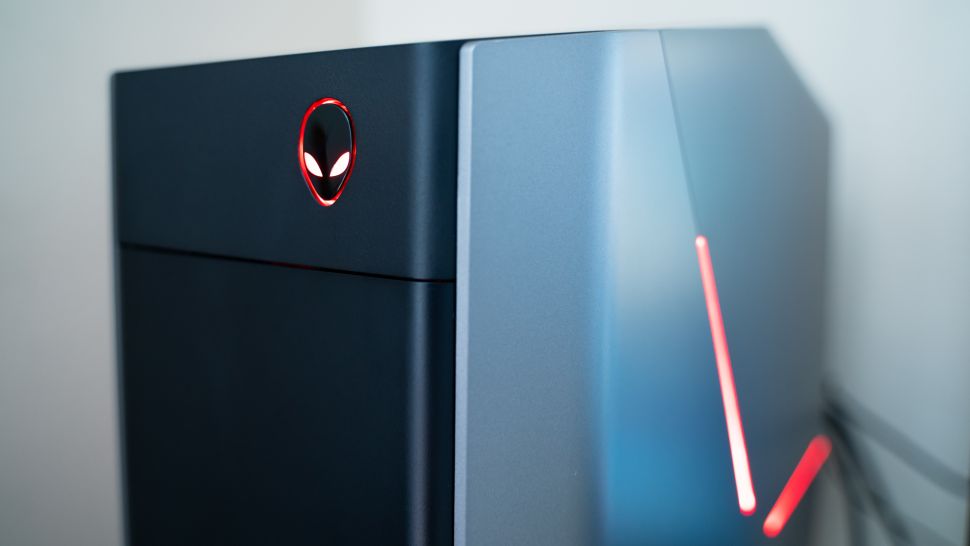 Sleek, simple, understated – these are all perfect descriptions of the Alienware Aurora R8’s design. And, while it doesn’t reinvent the Aurora line aesthetic, its look does take the mid-tower design and gives it an attractive gray on black look. It also implements RGB lighting in a way that makes it appealing for gamers without going over the top. The Alienware logo and power button lights up as well as three lines that shoot out from the center of each side panel, all of which can be customized. 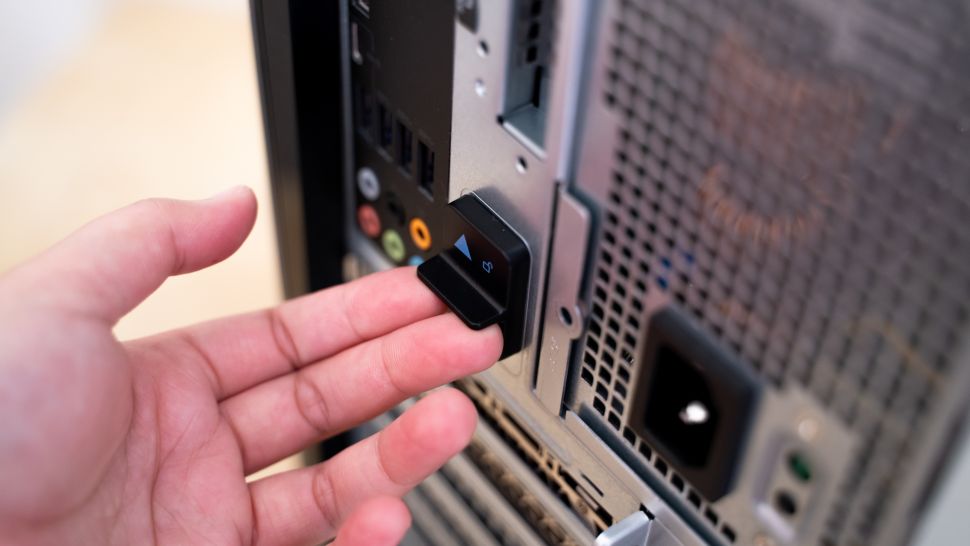 One of the gray side panels can be easily removed to get into the chassis. Though Dell markets the PC as having tool-less access, we did have to remove a screw to get inside. With that said, hard drives, the GPU, RAM and extra slots are all tool-less, making this a very easy computer to get into and upgrade.

The computer is also fairly future proof. Even if you get the base model, you can always upgrade to that Nvidia RTX 2080 Ti later. Or you can upgrade to 64GB of RAM – most computers still come stock with 8GB or 16GB for brawnier gaming computers. Our chassis has two extra slots for extra peripherals, like hard drives, on top of the two that come with the machine. 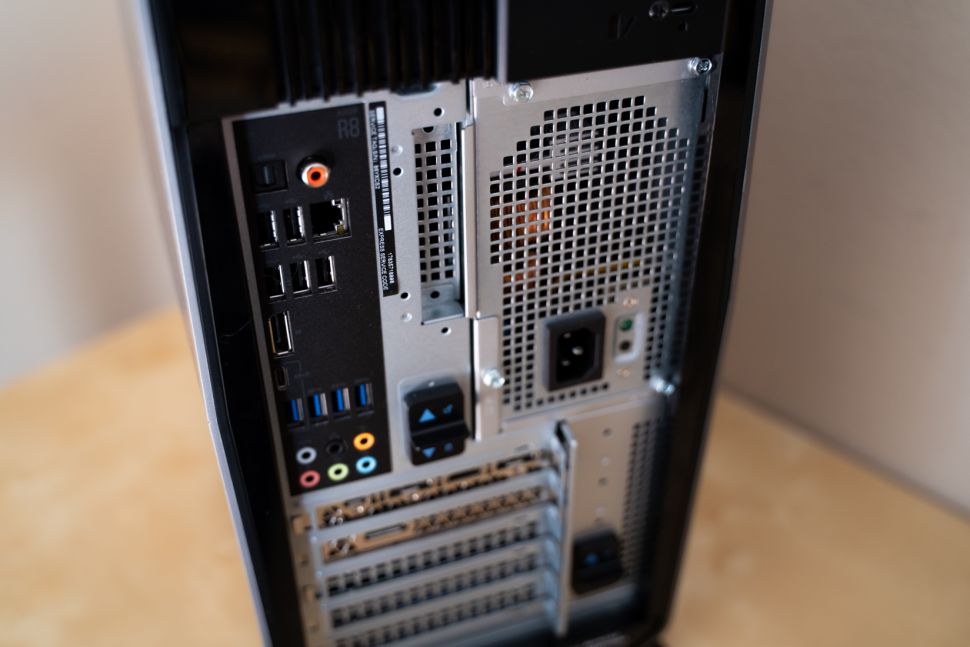 The machine even comes with more ports than any gamer or home user could ask for. It has USB-C ports on both the front and rear, multiple USB-3 and USB-2 ports, as well as three different ways to connect to a monitor or two on the video card (DisplayPort, HDMI and USB-C). It even has enough audio outputs to handle a surround sound system – not something we see every day.

The performance of the Alienware Aurora R8 is no joke. While the base model will probably be adequate for running AAA games, you’ll probably need to adjust the settings a little when exploring the jungles of Shadow of the Tomb Raider, the countryside of The Witcher 3 or tackling any graphics hungry game.

With our souped-up model, however, 1080p gaming was a breeze with the only issue being screen tearing, because our monitors couldn’t always keep up – easily fixed with v-sync or plugging into a monitor with a higher refresh rate. The Intel Core i7 and 32GB of RAM are not even the highest selectable options but are more than enough to run most AAA games at around 60 frames per second (fps) or more. Shadow of the Tomb Raider, for example, plays at an impressive 117 fps on Ultra settings on 1080p. 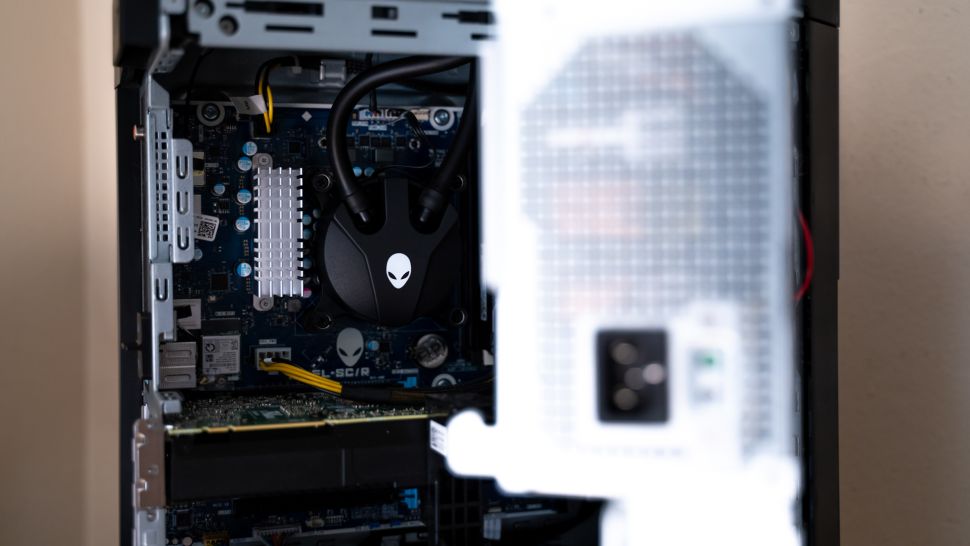 You may see some issues if you’re trying to push the computer to the limit and implement either ray tracing, a very new technology only available on a handful of games, or run at a higher resolution. We saw some frame rate drops when using ray tracing on Shadow of the Tomb Raider. And, while running games at 1440p still brought very respectable results, at 4K, games like Far Cry 5 and Hitman 2 couldn’t muster 60 fps (27 and 40 fps on Ultra, respectively). However, Shadow of the Tomb Raider still came in just under 60 fps on 4k at a respectable 56 fps, though we still experienced some frame drops.

It should be noted that even under duress, the fans don’t get obnoxiously loud and the computer doesn’t generate too much heat, even in a hot apartment. This is a nice surprise, especially considering how close we are to the processor (CPU) and the fact we usually used speakers instead of headphones. If you do change the fan settings to run at full blast, then they do get obnoxious. However, you have to change their settings in the Alienware Command Center to get to that point. 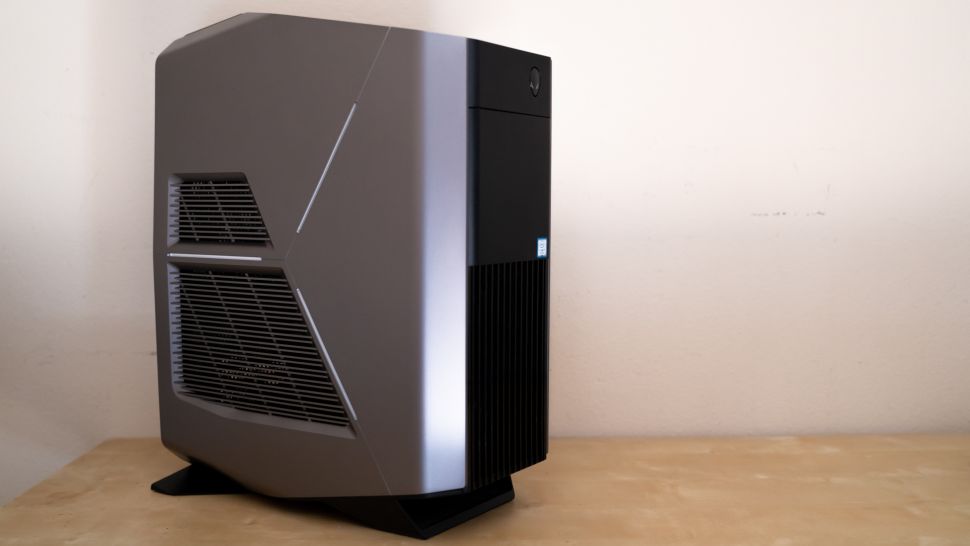 The main piece of software that Alienware offers as a unique feature with its desktops is the Alienware Command Center. And, while you really only have this app for most of your software customization, it is a pretty comprehensive program.

It scans every game you have installed on the computer and makes it accessible through the Command Center, saving you a few clicks through Steam or wherever you’ve downloaded games from. Not only can you launch these games here, you can customize thermals, power, audio recon and RGB lighting profiles per game so that when you run Shadow of the Tomb Raider, the computer can light up completely differently than running Resident Evil 2 or Hitman 2.

In the app, there are four menu tabs at the top, “Home,” “Library,” FX,” and “Fusion” to select from. Each of these tabs will bring you to a different screen to control a different aspect of the computer. The Home tab is a bit of an all-around option that offers you a selection of most played or most recently installed games as well as adjusting the overall power, thermal and overclock profiles of the computer (the overclock settings are not adjustable per game).

The library tab gives a comprehensive look at all your games. While you can adjust settings on the home page, this is where we generally selected the different profile options per game. The Fusion tab is where you can see what each profile does, as well as create your own. So, if you want the thermal profile, which controls two fans in the chassis, to have the fans on at full blast the whole time, you can do that here. Overclock settings can be adjusted here as well with control over the CPU, GPU and RAM. Just make sure you know what you’re doing if you don’t want to use one of the handful preset overclock profiles that Alienware has provided.

Lastly, the FX tab is where the RGB lighting is controlled. The Alienware logo on the front and the three outwardly pointing lines on each side of the case can be individually programmed. There are seven preset options to choose from, each of which can be customized for color and speed. Whether you want to make them all a solid pink, have them breathe blue or cycle through colors, there are plenty of options.

The only other program that should be mentioned here is the Killer Control Center which allows the user to control network settings to boost or prioritize bandwidth for online gaming, downloads and the like.

We really enjoyed putting the Alienware Aurora R8 through its paces. It has more power than we really needed for our gaming needs and is more than capable for just about anything a home user could possibly want out of a gaming computer short of spotless 4K.

In fact, the rig’s only drawbacks may depend on how hard you’re pushing your computer. It’s not quite there for 4K gaming or ray tracing, though that might change for the latter as we should see more games with ray tracing built in instead of retrofitted.

The computer’s pricing is not amazing, but considering what you get and the cost of the individual components, it’s about what you would expect. So while this might not be a steal, the Aurora R8 is definitely a worthy beast of a computer to help immerse you in your next adventure.

Don't miss a deal at Carphone Warehouse
Best offers at EE Mobile
Discounts, Sales and Deals at Surfdome
Save your money with Argos
Online-Shopping with Sephora
Best products at House of Fraser
Latest Posts