I must admit, I wasn’t expecting all that much from Addlink’s S70 SSD. I’d never heard of the company before, and a 1TB NVMe SSD for the stunningly low price of $120 raises every red flag I know concerning performance.

Well, pickle me and call me ridiculous if the S70 didn’t run rings around the other budget drives, and many pricier models in our testing, easily earning an Editor’s Choice. The market just got very interesting.

This review is part of our ongoing roundup of the best SSDs. Go to that story for information on competing products and how we tested.

In the synthetic benchmarks, the S70 gave the best drives I’ve tested a real run for the money. The fact that it slows down after it runs out of cache to just under 1GBps during sustained writes left it slightly behind. But only a couple of drives sustain faster than that, and I’d hardly call that rate slothful.

The S70 is a very fast drive, and you’d be hard-pressed to tell the difference with the naked eye between the WD SN750 Black NVMe and the Samsung 970 Pro to which I compare it. 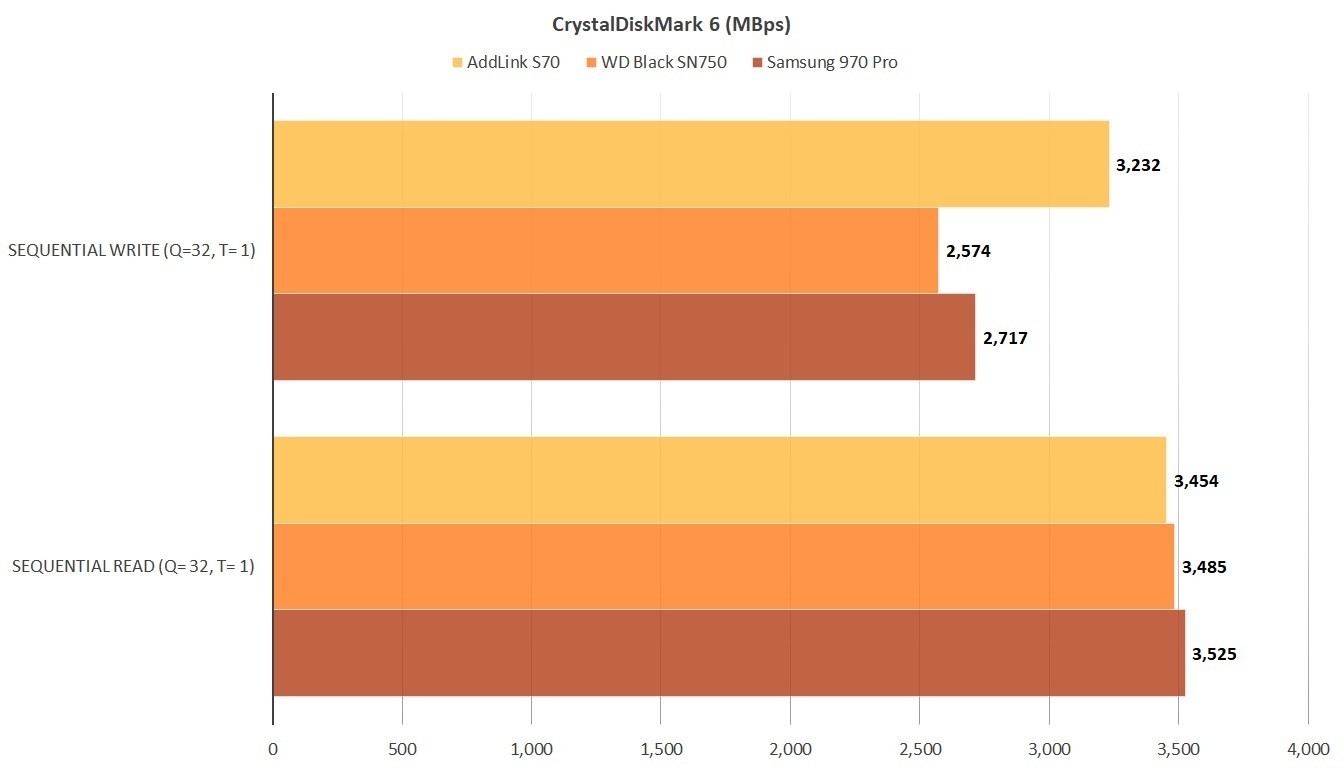 The S70’s CrystalDiskMark numbers, shown above (gold bars), measure sustained throughput with relatively small amounts of data (1MB). The results for the Addlink are stellar. The drive isn’t quite on a par with its more expensive rivals when it comes to real world copies, as shown below, but it’s certainly in the ballpark. 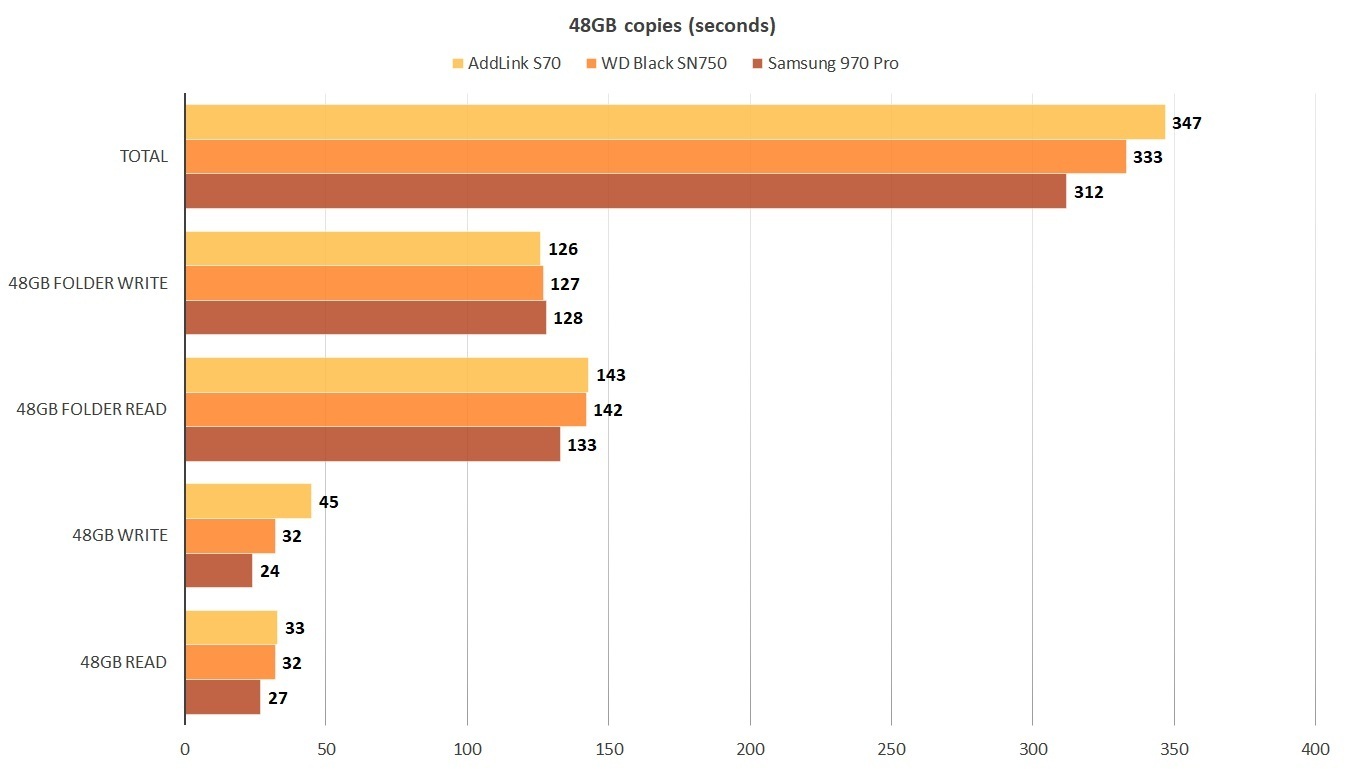 AS SSD proved a major coup for the S70, where it beat even the mighty Samsung 970 Pro in a couple of tests. 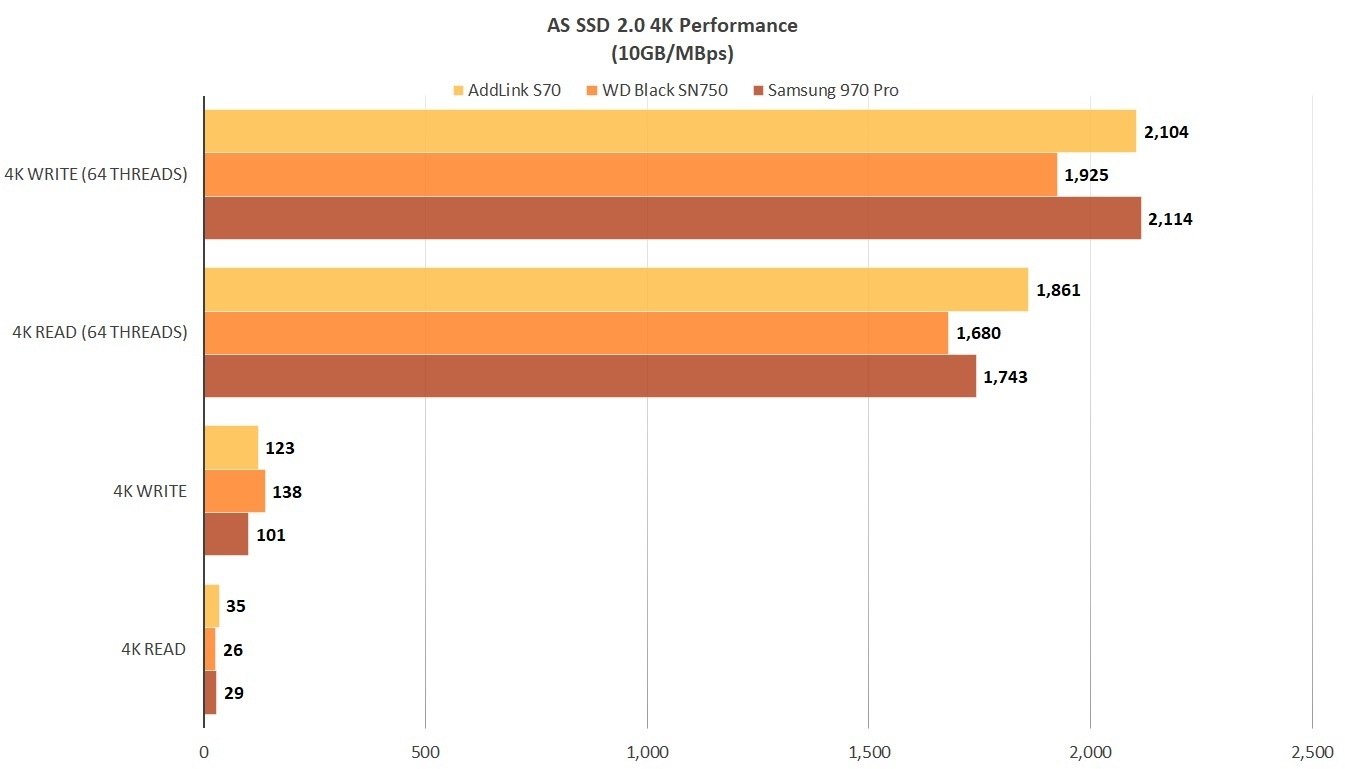 Performance simply isn’t an issue with the S70 as it can be with some older bargain drives, though thankfully, the days of NVMe drives dropping to below-SATA speeds when the cache runs out seem to be over.

My only caveat with the AddLink S70 is that service and support are unknown quantities to me at this point in time. I’ve had no dealings with the company so I simply can’t say, though the five-year warranty is two years longer than you generally see in the low end of the market. The TBW (TeraBytes Written—the total amount of data that a company is willing to guarantee can be written to the drive) ratings of 350/600/1200/2000 for the 256GB/512GB/1TB/2TB drives, respectively, are quite high as well.

A hard deal to pass up

I’m sure other drives will be dropping in price soon, and the vendors are not going to be happy about it given the already thin margins in the SSD market. But vendor pain is your joy, and as it stands now, you can save $30 or more with the AddLink S70 without losing out in performance. Even it were merely priced equally with the competition, I’d recommend it. I consider the S70 a very nice introduction to AddLink.

The AddLink s70 is a bargain NVMe SSD that’s priced lower than the competition and performs nearly as well as the high-priced drives. Enough said.