Entry-level gaming laptops can be hard to get right, but the new Acer Nitro 7 might have the winning formula

The Expert Reviews labs have been hammered by a rapid succession of overpowered high-end gaming machines of late, so it’s been a relief to get my hands on a nice affordable laptop for a change. Acer’s Nitro 7 (2019) is exactly the sort of laptop you might buy if you’re new to PC gaming, or shopping to a budget. And although I was seriously critical of the ultra-cheap, Ryzen-powered Acer Nitro 5 from last year, the new Nitro 7 has, happily, changed my opinion on the Nitro range.

Acer is aiming neither high nor low with the Nitro 7 AN715-51. Rather, it’s shooting straight down the middle at the average gamer with an average income. Someone like me, basically. Its 15.6in non-touch IPS display has an FHD, 1,920 x 1,080 resolution and a 144Hz refresh rate, which has become the base expectation for mid-range gaming laptops. 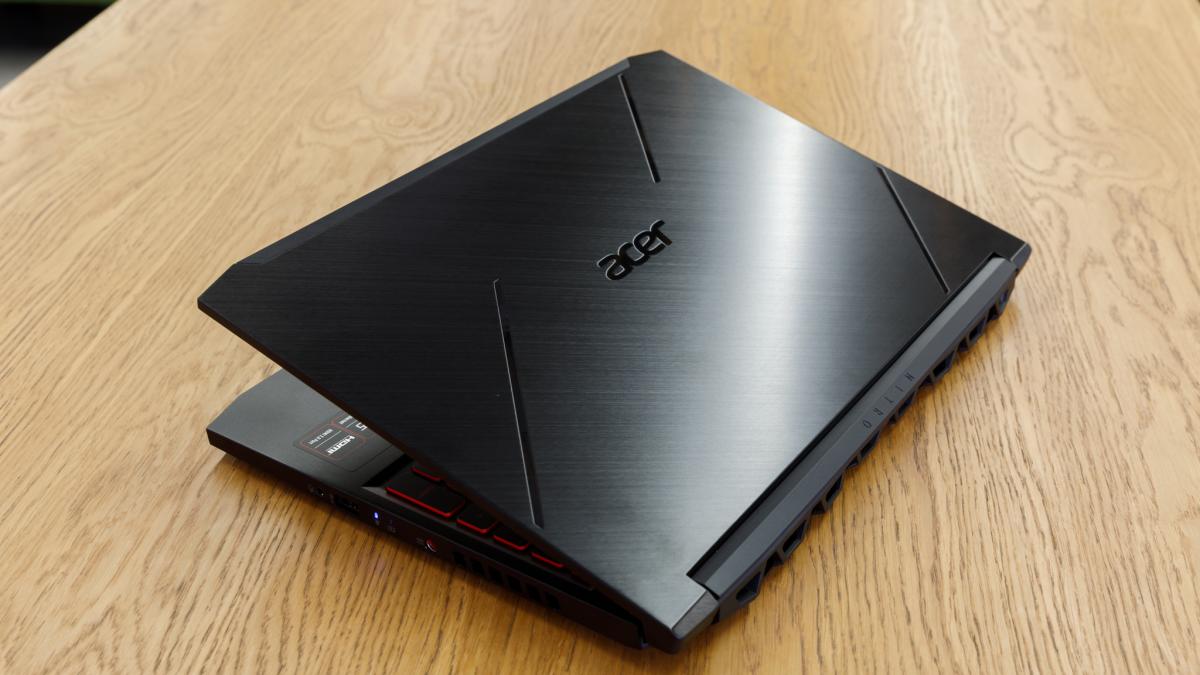 There’s a lot of power tucked into the chassis here, too. Acer has equipped this Nitro 7 with a 9th-generation Intel Core i7-9750H CPU, an all-new processor for 2019 with speeds of up to 4.5GHz. This is reinforced by 8GB DDR4 SDRAM, expandable up to 32GB, and an Nvidia GeForce GTX 1660Ti GPU (6GB GDDR6). It’s a pretty potent setup, then. It doesn’t lack for storage either, with a 512GB SSD that should hold a dozen good-sized games at a time.

Based on the prices of gaming laptops I’ve reviewed previously, I’d expect a spec like that to go for around the £1,500 mark, or perhaps slightly below. Acer’s clearly feeling generous, though: this Nitro 7 model costs £1,200 at Currys PC World. In the US there are other specs available, but the configuration described above seems like the only one you can buy in the UK. The AN715-51 strikes a nice balance between price and performance, so it’s probably the best model to go for anyway.

Earlier on I mentioned the Acer Nitro 5 from 2018. While I don’t recommend it in any way, it serves as an example of the sacrifices you’ll have to make if you go for a true entry-level gaming laptop. At £750 from Amazon, it packs an AMD Ryzen 5 CPU, 8GB RAM and AMD Radeon RX 560X graphics, and failed to deliver anything approximating decent gaming performance.

Unless you’re willing to breach the £2,000 wall, there’s not much else out there that I can recommend right now. Having said that, I do have mid-range 2019 review models of the Acer Predator Helios 300 and Lenovo Legion Y740 on the way. Both laptops look like they may provide the Nitro 7 with some stiff competition.

The Nitro 7 looks an awful lot like the Nitro 5, but upon closer inspection, it’s definitely cut from a finer cloth. Where the Nitro 5 was covered top to bottom in tacky plastic, the Nitro 7 at least uses metal covers on the lid, base and keyboard. The chassis within is still plastic, though, while the red-and-black colour scheme is much the same. It’s more overstated than the HP Omen 15’s design but it’s not too in your face either, and there are no glowing logos or throbbing RGB lightbars of the kind found on ROG and Alienware laptops. 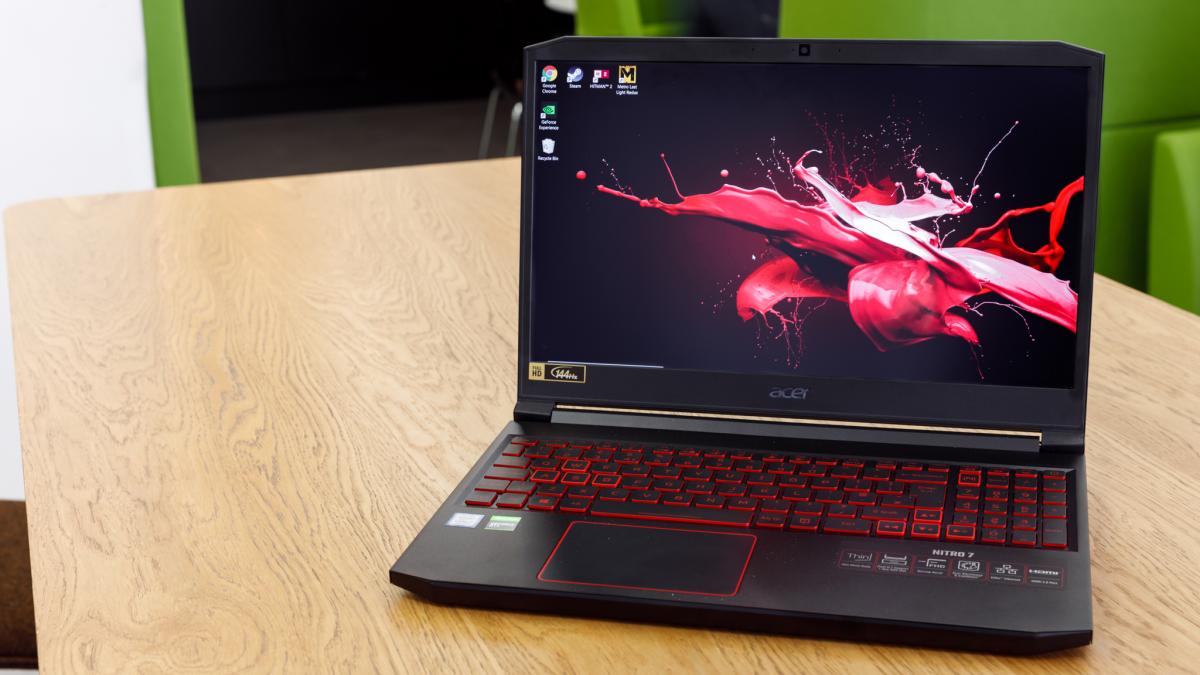 As gaming laptops go, it’s not too chunky but at 2.5kg without its power brick, you’ll definitely notice it in your bag. Despite having the same 15.6 display size as the Nitro 5 I reviewed, the Nitro 7 has a slightly slimmer profile, measuring 363 x 260 x 23mm (WHD). It could be slimmer, though; the display’s chin and forehead bezels are pretty thick, with the latter housing the Nitro 7’s 1MP webcam, which records 720p video at 30fps. Even though the back of the laptop’s lid is covered in metal it’s still a touch flimsy. It doesn’t have as much wobble as the Nitro 5 but as a mid-range machine, it should really have a sturdier build. 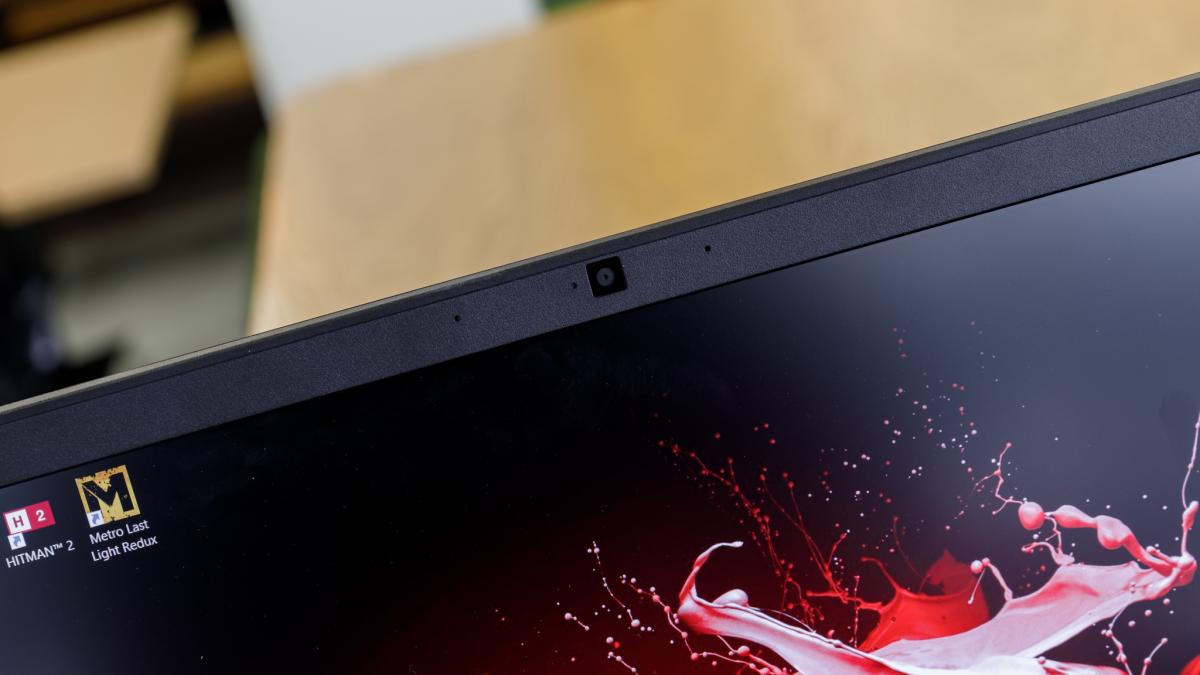 It’s always nice when gaming laptop ports are located at the rear; it helps to keep desk clutter at bay. Sadly, that’s not happened here. On the left edge are two USB-Type As, one USB Type-C 3.1, an HDMI output, an RJ45 Ethernet jack and a Kensington lock. 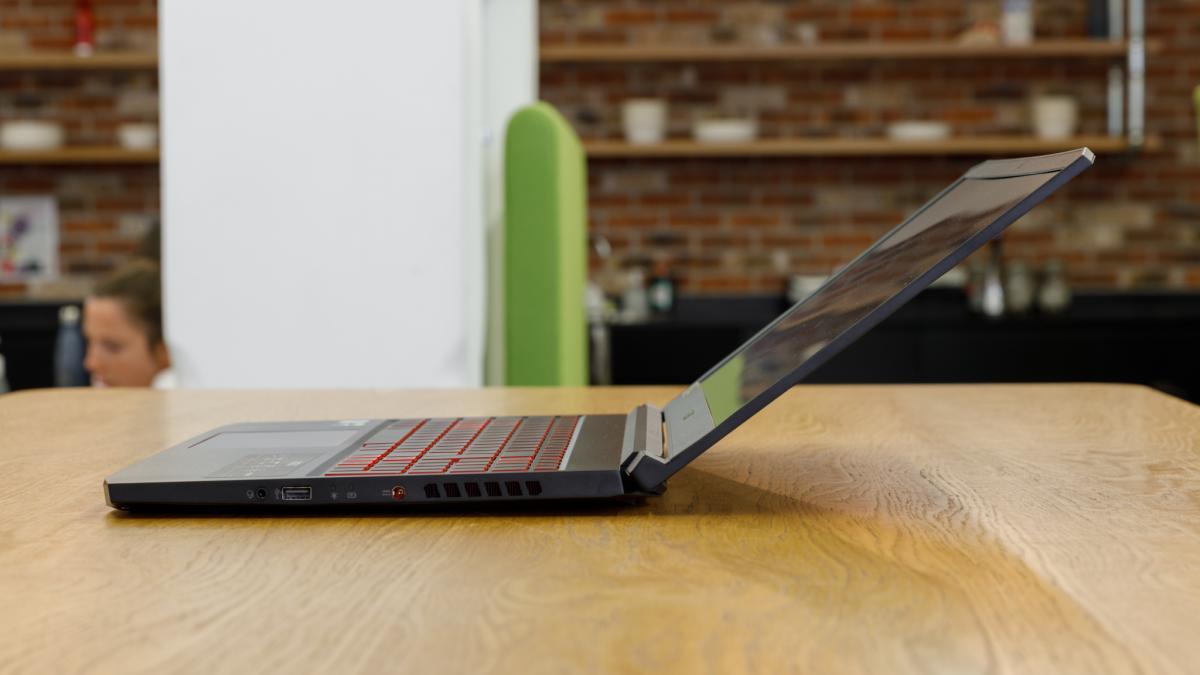 The right edge holds a 3.5mm audio jack, another USB Type-A port and the proprietary power jack. You’ve got enough there for external display connections and standard peripherals. The lack of Thunderbolt connectivity is a shame, and it would have been useful to have an SD card slot too – there’s plenty of space for one. As for the stereo speakers, they’re exceptionally average and you’ll really want to grab a decent headset. 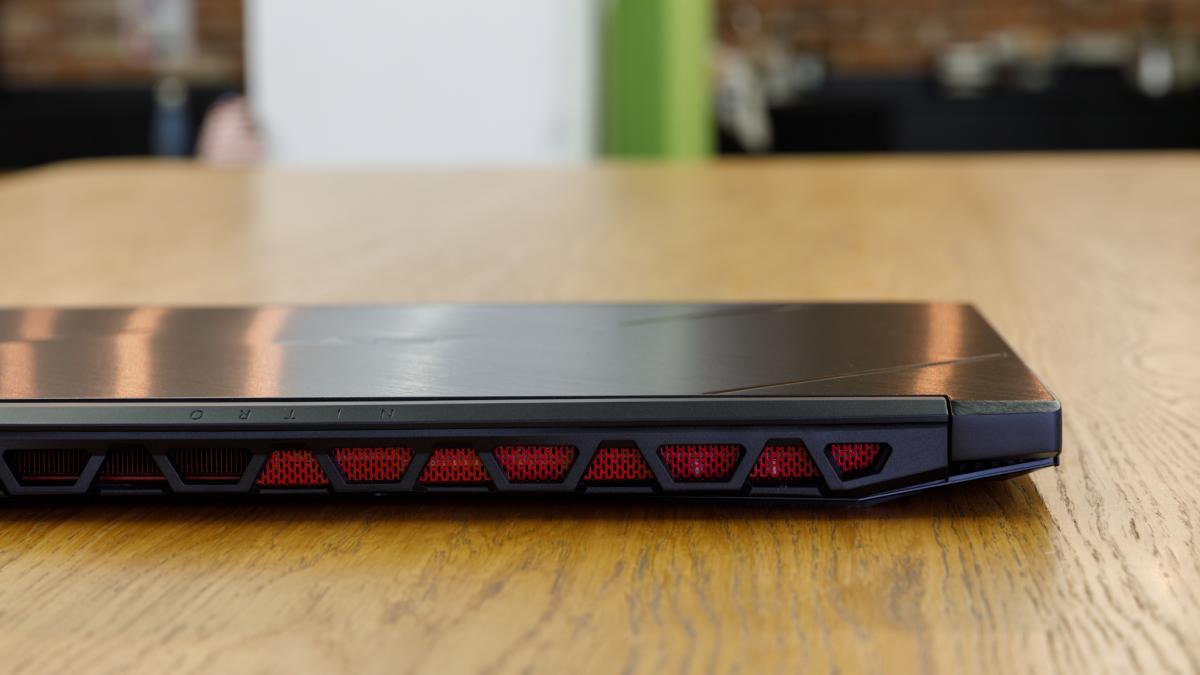 The rear edge is occupied by red and black exhaust grilles divided into geometric shapes. A similar style is used on Acer’s Predator Helios 500 and Helios 900 laptops. What about the fans themselves? Well, they do get a bit noisy when they’re whirring at full tilt, but not so loud that it will distract from your gaming sesh. You can also tinker with the fan speed using Acer’s built-in NitroSense software, though I never found the Nitro 7 getting hot enough to warrant maximum fan speed. Sometimes, auto just works best.

Here’s another area where build quality is lacking. I bashed the Nitro 5’s keyboard for its spongy, cheap-feeling keys and I’m not feeling too generous towards the Nitro 7’s either. While an improvement on the Nitro 5, typing on the Nitro 7 is not what I’d call pleasurable. Key travel and rigidity are fine but the keys themselves are made of notably tacky plastic. 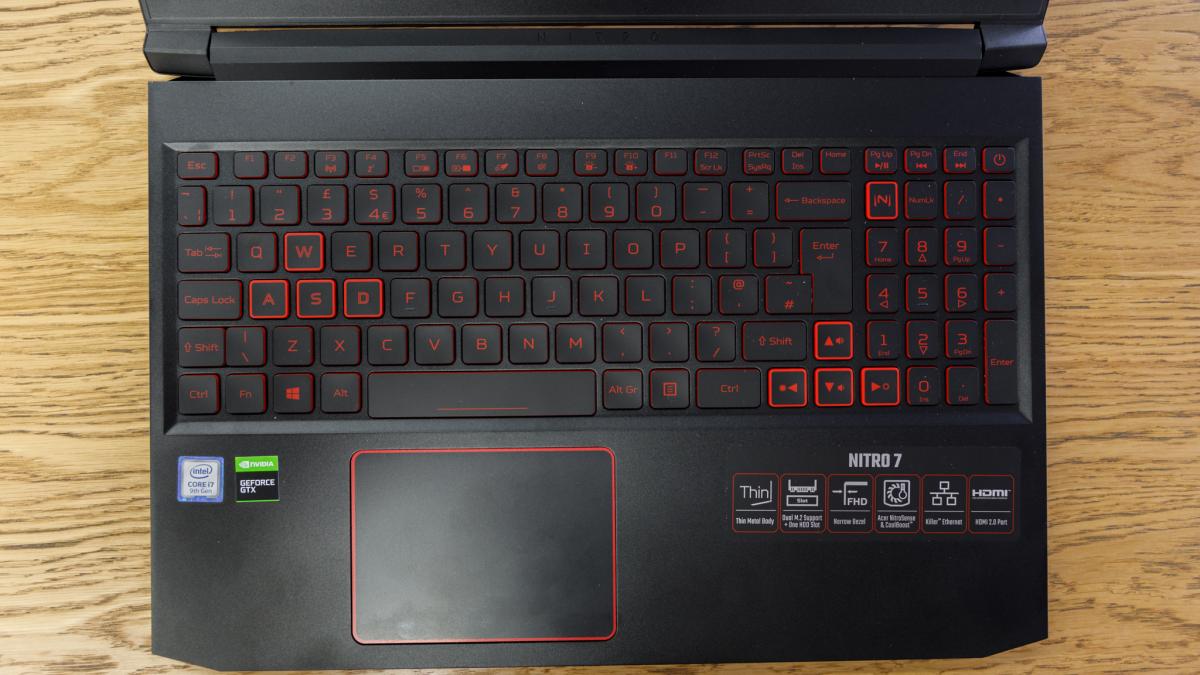 The layout of this full-sized chiclet-style keyboard is fairly standard: it includes a number pad, NitroSense key and lighting and volume control shortcuts on the arrows. The WASD and arrow keys are also highlighted in bold red, helping them stand out. 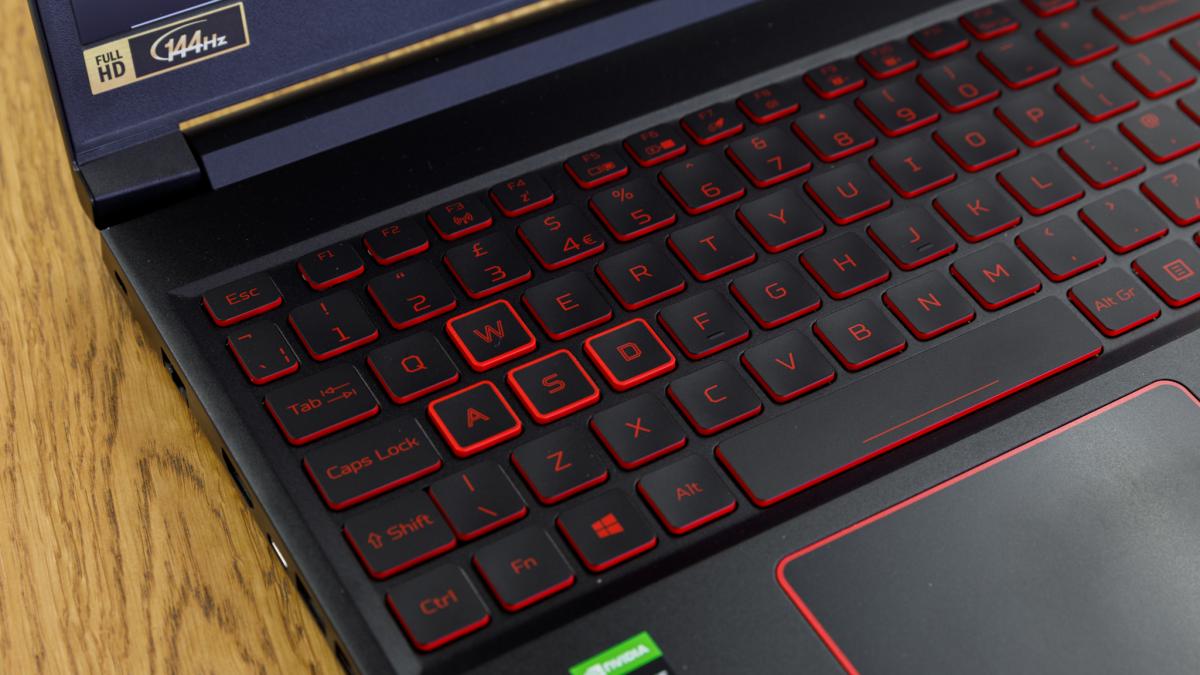 Backlighting consists of two white-light levels, with no customisation options. Pushing down on the keyboard causes the plate to depress quite deeply, a further indication of the cheap build. At least the diving board touchpad works well, even if its surface lacks smoothness.

The Nitro 7’s 15.6in FHD (1,920 x 1.080) IPS panel has a refresh rate of 144Hz and includes Nvidia’s G-Sync technology to regulate on-screen frame rates and prevent tearing. What’s more, Acer has used a matte finish, which I much prefer to the reflective gloss you often get with gaming machines.

The display quality is mixed, though. One positive is the maximum luminance of 344cd/m2. As the photos show, that’s bright enough even if you’re playing games in a room with harsh lighting directly overhead. The contrast ratio should be better, though. At 940:1, it’s considerably lower than the Acer Nitro 5’s 1159:1. 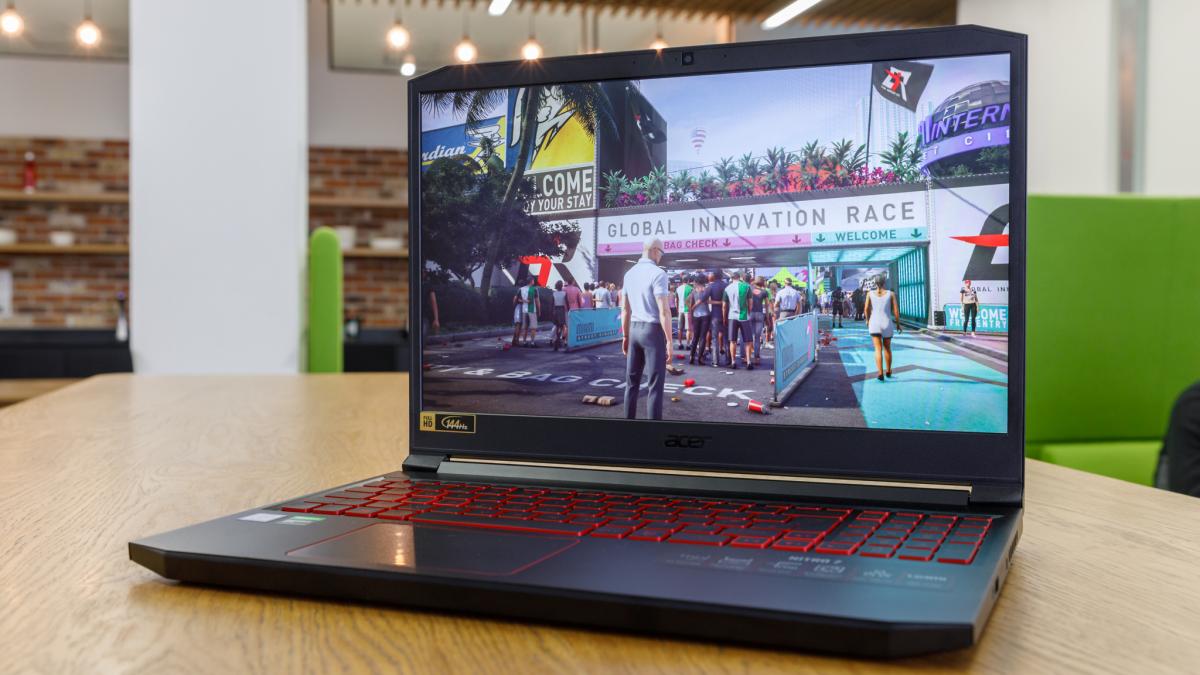 On the plus side, colour reproduction is decent. I measured the panel’s sRGB gamut coverage at 89.5%, and its sRGB volume of 95% indicates a solid crossover with that colour space. Darker colours tend to be slightly off the mark, especially greys, purples and reds, but the average Delta E score of 1.86 suggests a high level of accuracy overall. It’s not quite good enough for creative professionals but it’s fit for all but the pickiest of gamers.

So, the display is workable, but without decent gaming performance, that’s of little interest. I’m pleased to say that, unlike the Nitro 5, the Nitro 7 absolutely delivers. Its i7-9750H and 8GB RAM setup helped it storm through the Expert Reviews Bench stress-test with a speed of 156. That’s not as nippy as the HP Omen’s result of 170 but, when performing daily tasks, you wouldn’t notice much difference between them. 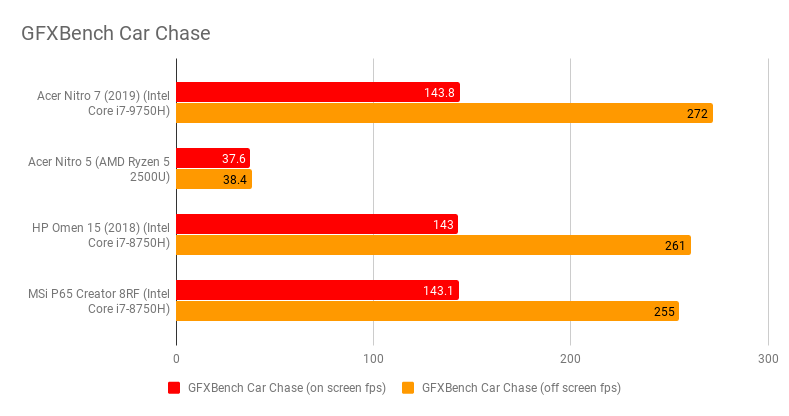 And when it comes to gaming, the Nitro 7’s performance is practically indistinguishable from that of the HP Omen 15. Boosted by its Nvidia GeForce 1660Ti (the first I’ve tested) it pushed the off-screen GFXBench Car Chase to 277fps and maxed out in the on-screen version. 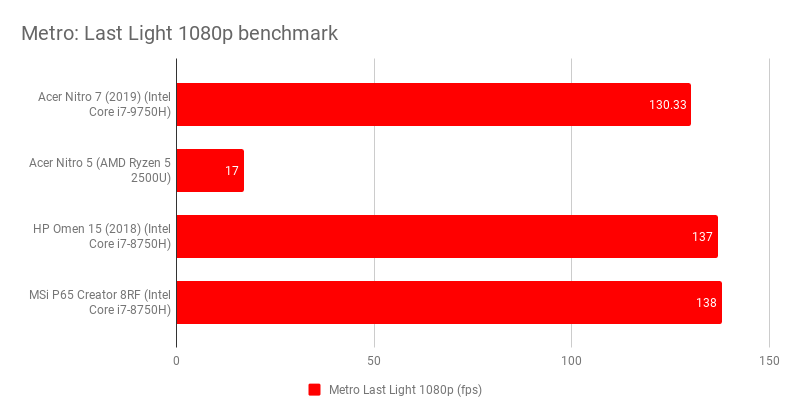 In the more demanding ‘real-world’ Metro: Last Light benchmark on high settings, the Nitro 7 achieved an average frame rate of 130.33fps, only 14 frames below its panel’s 144 maximum. Older Triple-A games like this play like an absolute dream on the Nitro 7, and it doesn’t even get hot when running them.

What about newer titles, though? IOI’s Hitman 2 (2018) has one of the most brutal gaming benchmarks going, and when I ran its Mumbai benchmark on near-max settings the Nitro 7 maintained a 30.1fps average. Reducing supersampling down a couple of notches, I got that number up to 73.3fps. 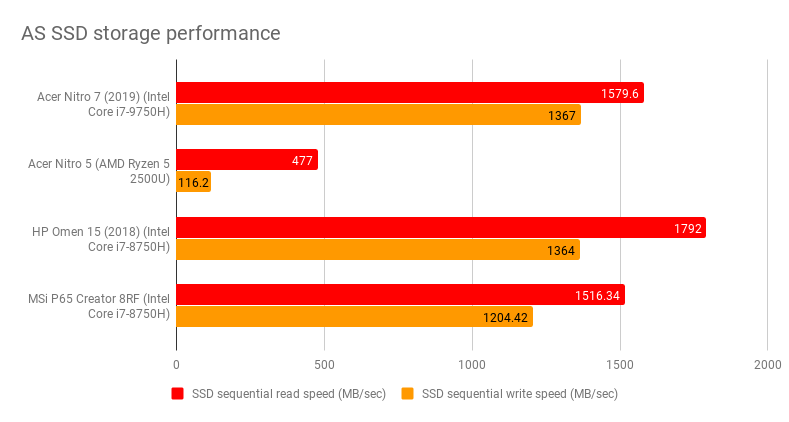 Looking at the Nitro 7’s storage performance results, I come back to the HP Omen 15 yet again. The latter came with a 1TB HDD and a 256GB SSD, while the Nitro 7 makes do with a lone 512GB SSD. In the ASSSD test, this drive logged sequential read and write speeds of 1,579.6MB/s and 1,367MB/s, respectively. Those are impressive results, and basically on par with the HP Omen 15. It’ll save big files and boot up games in no time. 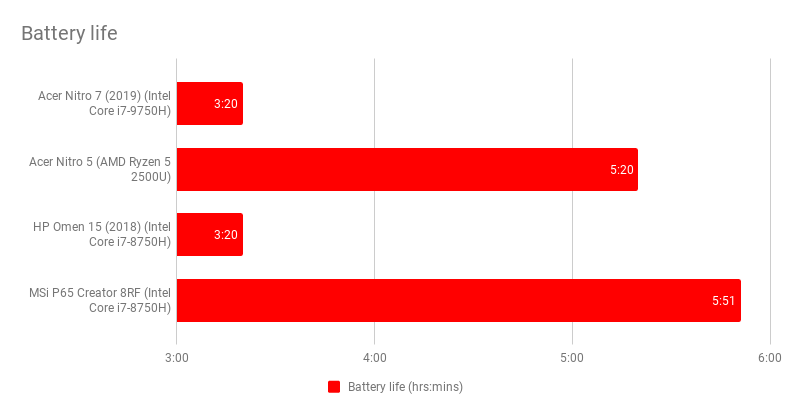 Planning to take your Nitro 7 on the road? You won’t last long, without a power socket nearby. In our battery rundown test, the Nitro 7’s 58.7Wh battery kept it alive for only 3hrs 20mins; exactly the same time as the HP Omen 15, funnily enough. If you’re playing games, you can expect that battery life to drop below an hour.

The Acer Nitro 7 AN715-51 (2019) is an affordable machine with exceptional performance for its price, and if you’re in the market for your very first gaming laptop and you don’t really care what it looks like, this is a sound choice. For the hardware inside, it’s an undeniably good deal, and it will run the latest and greatest PC games at high frame rates without overheating. 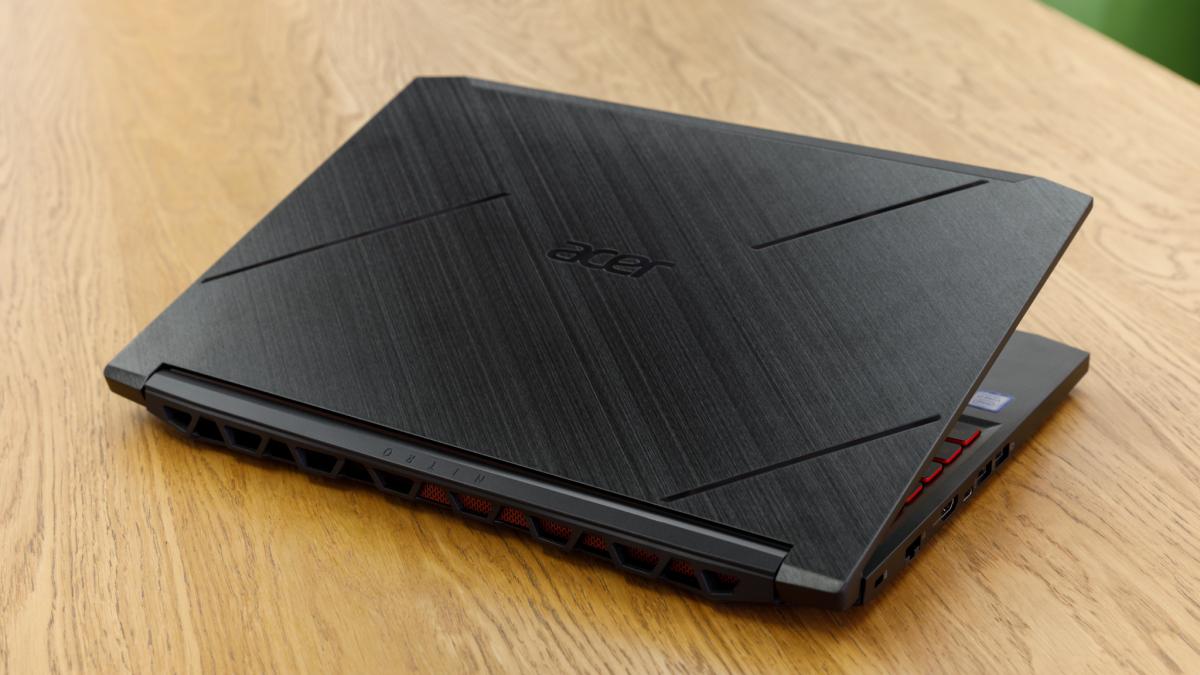 Those seeking a more premium build might want to look elsewhere, though you’ll likely need to spend upwards of £2,000 for the luxury of a gaming laptop with an all-metal build. If that’s what you’re after, I recommend the latest Razer Blade 15.

Don't miss a deal at EE Mobile
Best offers at Sephora
Discounts, Sales and Deals at Argos
Save your money with O2 Mobile
Online-Shopping with John Lewis
Best products at Boohoo
Latest Posts