ACER Chromebox CXI3 review: One of the best Chromebox computers you can buy

Small, speedy and surprisingly well connected, this is the best-realised Chromebox yet

The rarity with which new Chromeboxes launch is at least partially balanced by each design coming in about half a dozen different specs. The Acer Chromebox CXI3 is a perfect example. You can have it with an Intel Celeron 3865U and 4GB of RAM for about £250, but the version we tested packs a quad-core, eight-thread Core i5-8250U, not to mention 8GB of RAM and a 64GB SSD.

That all makes it something of a powerhouse in Chromebox terms. Like their laptop counterparts, Chromebooks, Chromeboxes typically settle for less horsepower, and a focus on cloud-based applications and storage in order to stay more affordable than equivalent Windows systems. This particular £502 model might be stretching the concept, but it does allow for slicker, smoother everyday use than most Chromeboxes

There’s not a hint of slowdown when racking up browser tabs and running multiple applications, and booting up is almost instant. The CXI3’s power is shown quite starkly in its Geekbench 4 benchmark results: 4,286 in the single-core test and 11,106 in the multicore test. 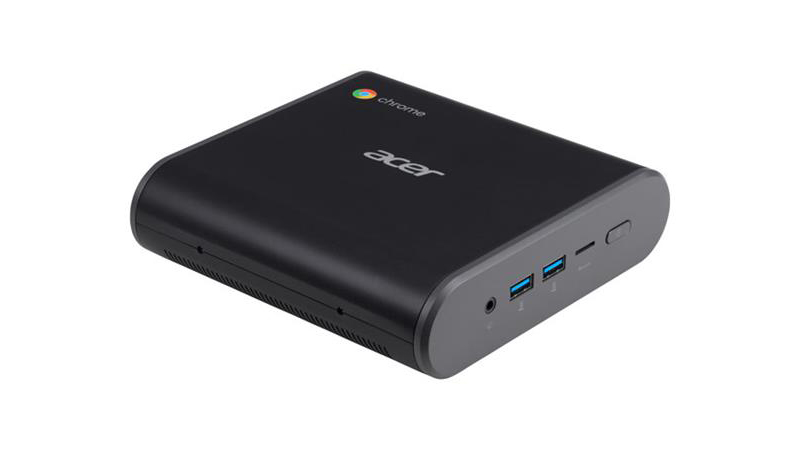 Compared to the Celeron 3865U-powered Asus Chromebox 3 we tested last year, the CXI3 is almost twice as fast on single-core performance and scored more than five times higher in the multicore test. Even though the Chromebox 3 is half the price, the numbers still favour Acer’s device.

The CXI3 also averaged 58fps in the GFXBench Manhattan 3 offscreen test, which is again about double what the Chromebox 3 managed. It’s still relying on integrated graphics – Intel UHD Graphics 620 – but since you can only install mobile-focused games from the Play store, this will be enough to run just about anything that’s actually compatible.

We love the design, too. It’s truly tiny at just 149x40x151mm, and is flexible in how it sits: you can have it laid down flat, stood upright with the included stand or even VESA- mounted to the back of a monitor with the (again, included) mounting plate and screws. Being so dinky hasn’t harmed connectivity, either. A total of five full-size USB3 ports (two at the front, three at the rear) are augmented by a USB Type-C port, which can output video if required. 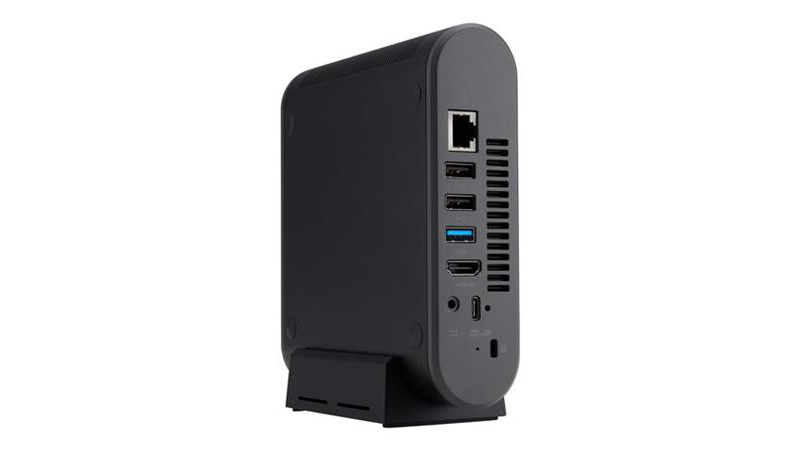 Alternatively, there’s also an HDMI output on the back, along with a Gigabit Ethernet jack and a Kensington lock slot. Lastly, the front panel adds a microSD card and combined microphone/headset 3.5mm jack. This is a great mix for such a diminutive PC, and although the Asus Chromebox 3 offers largely identical connectivity, the CXI3 bests it by exclusively using USB3 ports, rather than a combination of USB3 and slower USB2 ports, as the Chromebook 3 does. Wireless capability hasn’t been overlooked, either: both 802.11ac Wi-Fi and Bluetooth 4.2 are present and correct.

If you want to save some cash, you can fill two of those USB3 ports with the bundled mouse and keyboard, but we wouldn’t recommend it. The only unappealing aspect of the CXI3 is the accompanying horrible, plasticky, ergonomic-unfriendly peripherals. The keyboard is particularly poorly made.

It flexes to the point where not all the rubber feet are in contact with the desk, causing it to slip around in use. The fix, for the want of a better word, is simply to bend it back the other way. It also has the quintessential Chromebox quirk of replacing the Caps Lock key with a search key – all the more reason to replace it, unless you’re happy to relearn touch typing.

We plugged in a random USB Windows-layout keyboard and it worked fine, Caps Lock and all. Chrome OS itself is fine. The usual caveats about it lacking Windows’ extreme breadth of supported software apply, but a combination of the Chrome browser and Google Docs will suffice for many, and the Play store has ported versions of familiar apps such as Word as well.

On the Asus Chromebox 3, we ran into issues with Chrome OS’s snap-to-edge feature, whereby (as in Windows 10) you can drag an application to one side of the screen to have it automatically fill that half. Windowed apps would snap to one side but not fill the whole space, but luckily there are no similar issues here. The dual-app view works nicely, successfully improving the OS’s potential for multitasking.

The only other potential point of concern would be storage, but 64GB is only low by PC standards. Make proper use of cloud-based apps, as intended, and it’s much easier to live with than the 32GB offered on cheaper Chromeboxes. You can always add more capacity through the microSD slot, anyway. In fact, the CXI3 represents by far the most comfortable Chromebox experience we can recall having. It’s both compact and well specified, attractively simple but able to handle heavier workloads if necessary. Pair it with a less terrible mouse and keyboard, and it’s a superb little computer.

Don't miss a deal at Currys
Best offers at Adobe
Discounts, Sales and Deals at TalkTalk Phone and Broadband
Save your money with O2 Mobile
Online-Shopping with The Home Depot
Best products at Argos
Latest Posts